Under the Lok Vaniki scheme, a farmer can extract benefits from his land by selling its produce, including timber 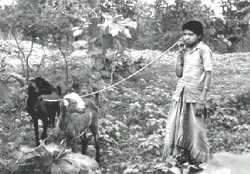 By LIAN CHAWII
The Lok Vaniki scheme, introduced in Madhya Pradesh in 1999, aims at empowering the farmers to manage their degraded forestland so as to derive maximum benefits by selling its produce, including timber.

The scheme has already brought about a few changes in the law as well. Under Section 240 and 241 of the mp Land Revenue Code, permission to fell trees has to be obtained from the district collector. But a Lok Vaniki Act, 2001, has been enacted, which gets rid of this arduous system and bypasses the collector. The Land Revenue Code of the state on woodlots has been changed to align with the rules of Lok Vaniki.

Unlike the joint forest management (JFM) scheme where people participate in the management of government forests, in Lok Vaniki, the government assists the people in nurturing and utilising their lands. The scheme is the brainchild of D P Singh, the forestry advisor to the Madhya Pradesh government and former principal chief conservator of forests, who feels that farmers can churn out huge benefits once their holdings are commercialised.

Out of the 8.4 million farmers in Madhya Pradesh, around half a million farmers have about one hectare of degraded forestland each, which can be utilised under the Lok Vaniki scheme without much investment. Besides, there are over 1.03 million hectares of land lying barren and unproductive outside the control of the forest department. Once the scheme is in place, Singh asserts that raw material for around 500 small and large forest-based industries would be met, besides helping to create employment for around five million people in forestry activities. "Even the current expenditure of around Rs 42.88 crore on importing raw material for such industries would be reduced considerably," he adds. If his projections come true, then Lok Vaniki could be a saving grace for most of the farmers in Madhya Pradesh, making the state one of the most prosperous and densely forested in the country.

Currently, the scheme has been introduced in six districts across the state on a trial basis. The objective of the government is to empower the farmers and eventually pull out. Chief Minister Digvijay Singh heads the executive committee on Lok Vaniki.

The farmers have been encouraged to create a Lok Vaniki Samiti at the district and state level. Currently, there are around 850 members and they meet on a regular basis, at least once in a month to discuss future action. Gram sabhas and gram panchayats are also being encouraged to plant on barren or sparsely covered commonland to augment their income. The role of the government is to dilute laws that prohibit people's participation or to decentralise power to appropriate levels.

The Lok Vaniki Samiti receives no financial assistance from the government, so the people have to fend for themselves. Actually, people also want the government out of this in order to manage and implement the schemes themselves. As they begin commercialisation, they should bring their holdings on record to obtain a management plan, which would be prepared by a chartered forester. This is for the first time that a forest plan would be prepared outside a government forest, says R K Singh, a faculty member at the Indian Institute of Forest Management (IIFM), Bhopal.

The plan usually prepared for 15 to 20 years involves scientific management of private holdings. Under this, trees above a particular girth can be felled and the branches can be trimmed to open up the canopy. Around four to five per cent of the trees in a holding can be felled yearly, which means only 40 per cent of the existing trees can be felled in 10 years. By that time, the old trees would have been replaced by new ones. Dewas district has already been surveyed and around 1,000 hectares of land will be under a scientific management plan. So far, around 81 plans have been prepared covering 199.81 hectares of private forests in 14 villages, says M Dixit, a chartered forester.

In Madhya Pradesh, around 19,488 hectares of land are under private forests, but this includes only those larger than 10 hectares and having more than 200 trees per hectare. However, even 6.5 hectares of land yield as much as Rs 50,000 a year. In Dewas and Hoshangabad district alone, there are at least 2,000 farmers having forests larger than one hectare.

The communities are taking steps to rejuvenate their holdings: "Now they know the value of the land they earlier considered useless," says M S Dhakad, district forest officer (DFO), Dewas. In some areas, people have begun fencing, while others are busy tilling. "Earlier, these lands were only useful for grazing," says Premnarayan Patel, another farmer from Piplani village in Rewa district. Under the six tehsils or blocks of Dewas district, most of the private forests are concentrated in three blocks. According to Dhakad, Dewas district alone has around 10,000 hectares of wasteland, which is not categorised as revenue or forest department land.

Forestry boards have been created at the state, district and janpad levels and the forest officers in charge of the region automatically become members of the committee. "This is a great departure from other government social forestry activities," says R K Singh.


It was the visit to Kolhapur, Maharashtra in 1999 that inspired the farmers. They heard about the cooperatives formed by farmers from around 72 village communities in Maharashtra. This was a result of many failed attempts in selling their sugarcane. "Now they have their own sugar mills and their annual turnover is around Rs 400 crore," says Singh.


However, the scheme is not as rosy as it sounds, not for now at least. Though the state government on its part has passed the Lok Vaniki Act, the actual success in this direction largely depends on the Supreme Court's decision to lift the ban on felling of trees. Three years after it was introduced, the farmers are still waiting for a relaxation from the court, and this has lowered their enthusiasm. "I have seen the people's spirit dampen since its introduction," says R K Singh. Another setback for the scheme is the long gestation period. But the government encourages a multi-tier system in which commercial and medicinal herbs will also be grown to reap immediate benefits.

Manmohan Agarwal, a 50-year-old farmer practices intercropping with eucalyptus and medicinal plants like menthol, planted at a gap of one metre each. He grows them in the east-west direction to receive more sunlight. More than 40 hectares of land are filled with lemon grass. While fruits like papaya, mango and jackfruit are planted in some areas, wheat also occupies a huge stretch. But it is the trees that earn him the most: "Intercropping trees with agricultural crops is easier to maintain than fruits with agricultural crops," says Agarwal. He mentions that the latter is prone to diseases, requires copious amount of water and attention.

Only seven years into this, Agarwal is already reaping huge benefits. He earns more than Rs 1 lakh from each hectare of land annually and claims to have used no pesticides. Interestingly, Agarwal received the Progressive Farmer Award for 2000-2001, instituted by the Mumbai based Indian Fisheries Association, for his contribution towards integrated farming.

Sudip Banerjee, principal secretary forests, Madhya Pradesh does not deny the possibility of its misuse: "In areas contiguous to forests, some scrupulous persons may misuse the land." But as R K Singh mentions: "There will always be a few black sheep, but the overall benefit should be considered."

Lalit Shastri, from The Hindu in Bhopal fears that this scheme may be misused: "There is no proper demarcation between the private and government land, so people can easily encroach upon the government land and resort to illegal felling." He adds: "With the patwaris on their side, they will convert the government forests to private forests and deplete it." While travelling across Dewas district, he witnessed some places that were encroached upon by the local people. But D P Singh disagrees: "In fact, the opposite would happen since private lands will be clearly demarcated."