Or, what nations do to make themselves heard, internationally 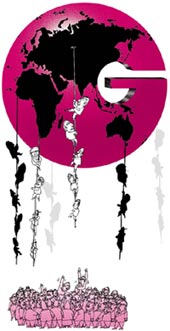 International relations have historically been characterised by coalitions of nation states. Even the present day un was born out of the deliberations of a post World-War ii (ww-ii) coalition of nations. Today, we have a plethora of coalitions -- or loose groupings of nations -- within the un, and other international bodies, that try to influence decisions through their collective bargaining power. However, the nature and role of these blocks differ significantly from some of the previous groupings (some of these have now evolved into international institutions).

Most of the new coalitions have sprung out of an imminent necessity: the absence of an independent supranational authority for global governance. This implies that such governance is now a matter of cooperation between nation states within institutions such as the un, the World Trade Organization (wto), the International Monetary Fund (imf) and The World Bank (wb). But, the gross imbalance of power between the world's 190-plus nations means that weaker nations need platforms to rally around or else their voice is unlikely to be heard. The growing number of coalitions -- whether formed on ideological grounds or on specific issues -- is a mere response to that need.

But what are the various coalitions that exist today? Why were they formed? And what are their exact roles?
The initial few coalitions that were formed between countries since the creation of the Bretton Woods institutions in 1944 and the un in 1945 were responses to security threats. The Cold War that followed ww-ii saw the formation of two military alliances: the North Atlantic Treaty Organization (nato) and the Warsaw Treaty of Friendship, Cooperation, and Mutual Assistance. In 1949, the us and its Western European friends combined to create the nato as a common defence against the communist Soviet Union and its East European allies; the latter in turn forged the Warsaw treaty in 1955. The treaty ran into problems because the East Europeans resented the presence of Soviet troops in their countries and by 1990 it was disbanded. The nato has meanwhile become a formidable alliance, though of late some rifts have begun to emerge in this group.

Western European nations have also coalesced into another group -- one very different from the nato. The project initially began as an attempt to integrate the coal and steel industries of the region. The idea, floated by the then French foreign minister, Robert Schuman, in 1950, culminated in the creation of the European Coal and Steel Community which integrated the industries of France, Italy, West Germany, The Netherlands and Luxembourg in 1951. In 1957, these countries went on to form the European Atomic Energy Community and the European Economic Community. In 1967, the three communities merged and the new block soon transformed into a political and economic group, with a single market, a common currency and even its own constitution -- the European Union (eu). Today, the eu has a collective bargaining power of 25 nations (in fact, 10 new members joined it on May 1, 2004) and is a force to reckon with at all international institutions and meets.
Unlike these alliances, there are other more loose groupings that aim to promote the collective economic and political interests of its members. One such coalition, the Group of 77 (g-77) was created on June 15, 1964, at the end of the first session of the un Conference on Trade and Development in Geneva, Switzerland. The group provides developing countries with a platform to articulate and bargain out their collective economic interests at major international fora. It also produces joint declarations, action programmes and agreements on specific topics. One nation holds the chairpersonship of g-77 for a year and also acts as a spokesperson for it. Initially, g-77 comprised 77 nations, but has since grown to 132 members who represent 80 per cent of the world's population.

In 1971, the g-24 -- an intergovernmental group of 24 countries on international monetary affairs and development -- was carved out of g-77. Its principle objective is to present a common position for developing countries on monetary and development finance issues at the imf and the wb. The g-24 comprises nine countries from Africa, eight from Latin America and the Caribbean and seven from Asia. Other g-77 members can participate as observers, while China enjoys a special invitee status. There are three office-bearer countries: the chairperson, and the first and second vice-chairpersons; these office bearers represent the three regions. An elected country initially takes up the second vice-chair position for a 12-month period, becomes first vice-chair the following year and assumes the chair, the year thereafter.


In 1975, an exclusive club of the world's most industrialised nations was created when the then French president Valry Giscard d'Estaing invited leaders from Germany, Japan, the uk, the us and Italy to the Chateau of Rambouillet, near Paris, to talk matters of global importance. The oil crisis dominated that meet's agenda. Canada joined this group a year later and so the g-7 was created.

Over the years, the group's scope has expanded from fine-tuning short-term economic policies of member countries to wide-ranging social and political issues -- especially in matters of sustainable development and global health. Though g-7 is neither an institution nor an organisation, it has acquired substantial clout to influence decisions of international bodies. Each member country gets to chair the group for a year and organise its annual summits. In 1998, Russia joined the group and it is now called the g-8.


Groups such as the g-77, nato, the Warsaw Pact, eu and the g-8 stood for a broad set of military, political or economic concerns. In the past decade or so, nations have simultaneously have become part of several disparate blocks that deal with specific issues -- such as biodiversity protection and trade. This development has acquired a fillip with the un creating several inter-governmental bodies that deal with particular issues. As an example, let us see what happened after the United Nations Framework Convention for Climate Change (unfccc) and the Convention on Bio-diversity (cbd) were created after the Rio Earth Summit of 1992. In unfccc debates, the Organization of Petroleum Exporting Countries (opec) does not go along with other developing countries, even though opec remains a part of the g-77 -- this oil producers' guild has to secure its economic interests, after all. Similarly, the cbd is not immune to nations coalescing around specific issues: its 2002 meet saw the emergence of a group of like-minded megadiverse countries (lmmc) whose members ostensibly seek to preserve biodiversity and encourage its sustainable use. The group also takes up issues relating to equitable access to genetic resources and protection of traditional knowledge. All this is not without reason: lmmc countries possess 70 per cent of the planet's biological diversity.

Objectives of groups such as the opec and the lmmc do not always put them on a collision course with the g-77, but this developing countries' block is increasingly becoming disunited because its members speak in different voices at various international fora -- the Fourth Session of the un Forum on Forests in May this year demonstrated this quite amply (see: 'No consensus', Down To Earth, June 15, 2004).

And this is not all: trade negotiations today have turned into bargaining grounds for alliances forged around specific issues -- this trend has grown after the wto was created in 1994. The tendency was visible at the wto's Cancun ministerial conference in September last year -- and also at this year's meet. Traditionally dominated by the us and the eu, the dynamics of wto negotiations changed with the emergence last year of the g-20 -- a group of large developing countries that demand elimination of subsidies which industrialised nations' governments provide to their farmers. Most members of this new group were earlier part of the Cairns Group -- considered agricultural liberalisers and traditional us allies. But at the Cancun ministerial, this group changed its stance and provided stiff opposition to the combined eu-us proposal on agriculture.

Besides, other nations also saw the value of forming new coalitions and so blocks such as the g-33 and g-90 -- with even more specific agendas -- emerged at Cancun. While the former was keen to protect the agricultural products they consider sensitive to their economies from any liberalisation, the latter was eager to retain their preferential access in developing country markets.

This trend of nations becoming part of disparate coalitions is only likely to grow with international institutions becoming increasingly specialised.