Getting more with less

System of crop intensification, specially in rice, has shown sizeable savings in water and seed usage. Yet its adoption has not spread despite incentives

Getting more with less 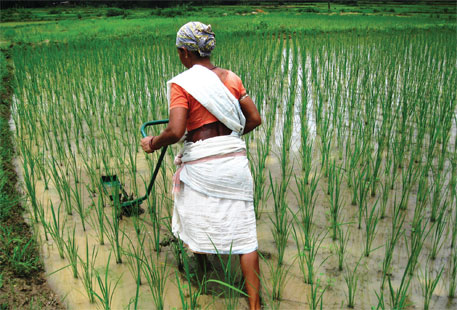 SIMPLE TECHNIQUES and manag-ement practices tend to be viewed with suspicion. In the age of input-intensive agriculture which calls for an array of machinery and a host of scientific props, a crop management system whose core basically is protecting the plant’s roots to provide better yields can seem extremely simplistic. For, that is what the system of rice intensification, or SRI, does. And with its success of making rice a better yielding crop being replicated with other crops such as wheat, sugarcane, maize, sorghum, mustard and millets, the term has been widened to a more inclusive system of crop intensification or SCI.

It is essentially a practice that its most well-known evangelist Norman Uphoff terms a technique for getting more with less. Uphoff, a political scientist at Cornell University in the US, who has been indefatigable in pushing first SRI and later SCI, believes these are the most obvious answer to the increasing levels of water stress and climate change threats hanging over agriculture. “You can almost halve the water usage and cut down the amount of seeds required while almost doubling the yields,” says Uphoff who insists “SRI is not a technology but an idea.” (see ‘Agriculture is egocentric’). The idea relies on four principles:

As simple as that? Yes and no. The SRI suite of management practices might appear easy to follow but it calls for skills and technical and social coordination that also has to take into account labour intensification. In India, the level of adoption of different components of SRI by marginal and small farmers, its main practitioners, has varied widely but most have reported some kind of savings on seed and water use. Rice is a water-guzzling crop, sucking up close to half the water used for agriculture, since it requires 4,000-5,000 litres to produce 1 kg of grain. The overriding worry is that agriculture, at current levels of production, already takes up more than 80 per cent of the fresh water resources in Asia.

For farmers, however, the main attraction of SRI is increase in yields. By how much and at what cost are questions that still need to be resolved. At a recent global conference organised by Wageningen University of the Netherlands which is funding major research projects on SRI in India, at least a dozen papers were presented, each citing varying jumps in yield, posing a problem of reliability. For instance, studies by NABARD, which has spent around Rs 26 crore on promoting SRI to 84,000 farmers, showed yields had gone up by 194 per cent while the increase in straw was by 189 per cent. It did not give the basis on which the increases were computed. A more realistic assessment came from the Tamil Nadu Agricultural University (TNAU) which surveyed 2,234 farmers in 13 states during 2010-11. It put the average yield increase at 22 per cent.

But some of the headline grabbing claims of unprecedented spikes in yield that have shattered global records in rice production have only served to make SRI more controversial. In 2011, Sumant Kumar from Bihar’s Nalanda district claimed to have got a yield of 22.4 tonnes of paddy per hectare, a record that beat a previous high of 19.4 tonnes per hectare set by a Chinese farmer. It was pooh-poohed by agriculture scientists here, in China and elsewhere. In 2013, that claim was topped by S Sethumadhavan of Alanganallur in Tamil Nadu who claimed to have harvested a yield of nearly 24 tonnes of paddy per hectare, once again through SRI. Tamil Nadu’s current yield is an average 2.78 tonnes per hectare.

Mainstream scientists, both interna-tional and national, continue to be lukewarm or sceptical about SRI although their initial hostility to the no-frills system has been tempered in recent years, not least because the World Bank has been promoting it. In 2007, the bank gave a generous loan of $485 million (Rs 2,134 crore) to Tamil Nadu to modernise its irrigation infrastructure, with a sizeable component earmarked for agricultural intensification and diversifi-cation.Of this,SRI has been a major beneficiary. Bihar is another state where SRI finds pride of place. It uses funds from the Centrally-allocated RashtriyaKrishiVikasYojana and the National Food Security Mission to promote SCI in rice, wheat and pulses. Last year it spent slightly over Rs 161 crore on rice alone and so far over 100,000 hectares are managed by this system.

Yet, almost a decade and a half after Uphoff and his band of missionaries began spreading the word, SRI occupies just 3.5 million hectares worldwide, cultivated by some 9.5 million farmers. India accounts for close to half this area with 1.7 million hectares and 3.4 million farmers. The key question is why the figures are so low given the benefits of the system. “The big obstacle is the mentality. Nobody is willing to put in even a fraction of the available resources into breaking the bottlenecks,” says Uphhoff.

He is obviously referring to officialdom. As a bottom-up, low-input, agro-ecological alternative to conventional farming which is input-intensive and ecologically toxic, SRI has been a grassroots success. It has pulled in a host of institutions and NGOs to promote the system—from WWF and Oxfam to Dorabji Tata Trust. At the same time, at least two dozen public research organisations from the premier Indian Agriculture Research Institute (IARI) to a clutch of state agriculture universities are actively researching SRI, making India the leader in the field. But that is by default and not design, notes C Shambu Prasad, professor of rural management at Xavier Institute of Manag-ement, Bhubaneswar. India, according to him, is reluctant to forge ahead on SRI.

The situation is marked by duality in the research establishment. The top echelons tend to be dismissive of SCI as reflected by the attitudeofa highly placed scientist in the Indian Council of Agricultural Sciences (ICAR). He contends that if SRI is indeed the success it is made out to be, then this should be reflected in the graph of rice productivity in Tamil Nadu and Bihar.“But this is not the case. Both states are getting money to promote SRI, so they are pushing it.”

Oddly enough, the Directorate of Rice Research (DDR), the top institute for rice in the ICAR system, takes a positive view of SRI. R Mahender Kumar, principal scientist at DDR, points out that climate change-induced higher temperatures will only increase the water requirements of rice. Every 10°C increase in mean temperature would result in a seven per cent decline in rice yields. “Hence, there is a need to develop water-saving technologies and SRI is one such.”

Kumar’s view is based on the outcome of long-term trials (2004-10) conducted in 25 locations across 16 states by the Hyderabad-based institute to assess the potential of SRI in comparison to normal transplanting methods under flooded conditions. The verdict was unambiguous. SRI recorded higher grain yields of 6-65 per cent over normal transplanting practice at a majority of the locations. SRI is just one of several conservation agriculture methods, such as zero-till, alternate wetting and drying, and integrated crop management that are used to improve the efficiency of water use. SRI came out a clear winner, saving nearly 25 per cent of irrigation water without any penalty on yield unlike the other options.

However, many of the ICAR institutions, from IARIto the Central Agricultural University in Imphal are actively promoting zero-till, bringing the total land under this system to five million hectares. But as India’s water crisis deepens, policymakers will have to take a hard look at the options and decide which of these will work best to provide “more rice for every drop of water”. Crop intensification might turn out to be just the ticket.