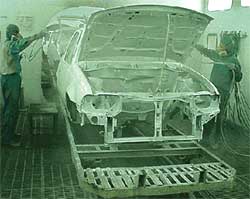 Though almost all the top-performers in each indicator have undertaken considerable efforts to lend their support to the environment cause, there are several grey areas which need greening. Most of these companies have adhered to some basic rules by formulating a procurement policy and taking specific initiatives to ensure that their supply chain is linked to the environment aspect. For example, General Motors and Ford Motors have been pushing their suppliers to get an iso 14001 certification and some of these vendors have already met with success due to these initiatives. The best global practice requires that polluting process is substituted with a non-polluting one. In such a case, despite outsourcing the process, the transfer of pollution does not figure predominantly in the company's supply chain. The company can even source the process from one of its own company or a joint venture. This will give the company the power to influence the environment performance of the vendor, since the former is a major stakeholder itself. Or else it can take in a competent vendor after verifying his credentials.

Since almost all the top-rung companies have most of the polluting process at their own production plant, the transfer of pollution does not figure predominantly in their supply chain. Some, to their credit, have at least partly (telco) or fully (Ashok Leyland and Scooters India Limited) eliminated polluting processes like plating the natural resources consumed at the company's production or assembly plant.

Worldwide there is a decreasing trend in water and energy consumption, use of less polluting energy sources and a shift towards renewable sources of energy. The top companies here have shown an inclination towards the same. Maruti Udyog meets as much as 50 per cent of its total energy requirements from clean gaseous fuels. Similarly Kinetic Motor and tvs Suzuki Ltd. have started water harvesting to meet its water requirement.

In process efficiency, installation of state-of-the-art painting technology to enable a more economic consumption and a shift towards water-based paints are the practices being adopted globally. All top companies have substantially higher paint transfer efficiency along with decreasing trends in paint and primer consumption. But no company has yet shifted to water-based paints. While most companies have been effectively recycling a substantial portion of exhaust from paint process for energy generation to reduce volatile organic compound (voc) pollution, they are stuck with the idea of throwing the other hazardous wastes like grinding sludge. Even in machining fluids, only coolants are recycled to a certain extent.

Treated wastewater quality of these companies is far better than the applicable standards. With continuous improvement in the final wastewater quality, very few of them have made an attempt to recycle the wastewater to reduce reliance on the etp for checking pollution. Most of these companies have in fact opted for better technology in their effluent treatment plant (etp) design so that they are able to treat the waste in a more effective manner.

As regard to air pollution, these companies have moved beyond the statutes and thus the quality of their air emissions is substantially better than the applicable standards. But they have a long way to go before they can install appropriate control equipment at all such sources which contribute to air pollution. While it is necessary that there be a specific guideline underlining various environmental criteria which have to be followed before deciding the material composition of the vehicles, these companies have yet to chalk out these. Where vehicle and engine design are concerned, some advance technologies have been incorporated to achieve a higher fuel efficiency and better driveability, but they are still to introduce some more features to make themselves more ecocompliant.

In the case of emission control equipment, most parameters are met with incorporation of three-way catalytic converter but there is a need to further improve technology. In emissions, overall design is still to move beyond status even though the emissions are far better than the regulatory norms. While the companies do have an environment department, can flash around the iso 14001 certification and have taken considerable interest in raising environment awareness of their employees, they need to monitor targets better and push for continuous improvement through a stronger system. The responsibility of the department should not stop at production plant only, rather it should cover sourcing the raw material, production process and development as well as product disposal and recycling. The last aspect is hardly taken care of by these companies.

Nearly all these companies have taken various steps for increasing consumer awareness. They have developed a transparent information system on the various negative aspects of the automobile like actual emissions, failure of control equipment, changes in emissions characteristics with time. Along with this, they have evolved easy to use guidelines for reducing the emissions and have conducted programmes for providing assistance and warranties through a network of dealers or service stations for proper maintenance of the vehicles during the product-use phase. But there hardly any efforts beyond that.

Despite keenness towards opting for better technology, there still exists a differentiation between developed and developing markets when it comes to so critical an aspect as environment. Automobile emissions are a big public health threat but the companies are still shy of going all out to address this huge problem.