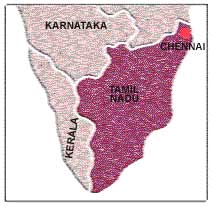 there is no cacophony of speeding two-stroke motorbikes, the ambience is serene and there is an abounding greenery that pleases the eyes. Self sustained with water, the zone is tobacco-free. This is not an ashram or a place of worship, but the Anna University campus in Chennai. One of the premier institutions in the country, the university is making all efforts to develop its campus into a sustainable and environment friendly one with minimised pollution by the end of 2001.

Vice chancellor of the Anna University A Kalanidhi is personally supervising the activities to ensure a pollution free environment within the campus and thereby create a healthy atmosphere for the students to concentrate on their studies. So much committed to the cause is he that even for trimming the branches of trees vc' s approval is required.

As a first step, parking slots have been earmarked within the campus so that traffic congestion gets reduced. Entry of auto rickshaws beyond a certain limit is banned. The authorities plan to restrict the entry of vehicles with two-stroke engines, which have a higher emission rate. These measures would help in controlling the vehicle emissions as well as noise pollution to a large extent, the vc says.

At present the gardens consume nearly 1.5 lakh litres of water per day, and the forthcoming plans to green the campus will need an additional amount. But the university is ready to manage this by recycling water that drains from the hostels and laboratories and reusing it. The institution has set up its own sewage treatment plant to treat the sewage water (four lakh litres per day) and reuse it for gardening purpose. In this way they are able to reduce the fresh water consumption.

The university has also taken up rainwater harvesting on a large scale and introduced percolation pits of 3m 3m x 3m with three bores of 10m depth from the bottom of the pit. The pit is filled with boulders, gravel and sand, facilitating easy percolation. Twenty four percolation pits were introduced within the campus. A few more pits were planned in other open areas. The ultimate aim is to have 100 per cent rain water harvesting system in the campus.

The hostel food waste is segregated and taken to a compost yard where it is mixed with the biomass generated within the campus and is converted as manure used for cultivation.

The vc is interested in making the institution an example in all round development. However, all this was not done overnight. As is well-known that student community cannot be forced but can only be convinced. Hence the implementation of the above measures was a slow but steady pace and has now became a student's movement. The university which is one of the premier academic institution in the country with the best of the brains is all set to provide an excellent example of an ambient environment for the students to deliver better stuff.