The blood-sucking pest is altering itself with changing environment. But studies on it are few and far between 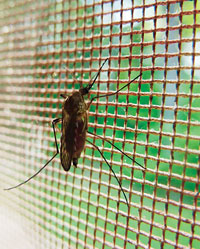 Dengue, malaria and chikungunya struck over 1.13 million people in the country last year. Of these, 766 succumbed. India bears a huge burden of mosquito-borne diseases, contributing 34 per cent of global dengue and 11 per cent of global malaria cases. Despite this, the country has made no headway in tackling the mosquito menace.

One reason for this is presence of only a handful of entomologists. Scientists of medical research institutes and universities working on vector and vector-borne diseases raised the issue at the first meeting of Vector Science Forum in 2010. Entomologists study how mosquitoes breed, their life cycle, behavioural patterns and adaptability to new habitats. “Controlling mosquito-borne diseases is a challenge without entomologists giving information on them,” says T Adak, senior scientist at the National Institute of Malaria Research (NIMR), New Delhi.

“At present, the country is heading towards a severe crisis of scientific manpower in pure sciences. Old scientists are retiring and there are very few trained and dedicated scientists,” says Adak, who retired from NIMR and was re-employed there. The condition in universities is grim, he says. Students prefer profesional subjects such as biotechnology and computer sciences to pure science subjects.

“In India, a lot of entomologists are required to study the mosquito—its identification, behaviour, habitat, breeding and resting pattern, and biting time, because the country has many climatic patterns and ecological conditions,” he says.

With rapid industrialisation and change in land use, the mosquito has adapted to the changing environment. Over the years, it has found new habitats. District-wise data shows West Bengal’s Burdwan district reported the highest number of dengue cases in July this year. As many as 350 people became victims of the disease in the district’s Dighnala village. “Dengue is new to this area. I fail to understand how the disease can emerge here because it is an urban disease,” says Dhiman Kumar Mandal, medical officer, Aandal block.

Similarly, Aedes albopictus, which lived in forest areas, has now found home in urban parts of northern India. “During our surveys in New Delhi Municipal Corporation areas we found the species in urban localities such as Lajpat Nagar and Narela,” says B N Nagpal of NIMR. “It indicates that change in land use plays a major role in migration of mosquitoes. It also indicates the need to extend vector surveillance in rural areas and change in control strategies,” he says.

Malaria-causing mosquitoes are also changing their habitat, states Nagpal in his yet-to-be published research on the disease. Between 2009 and 2012, his team studied eight districts in Assam. The state reports 5 per cent of malaria cases in the country because of the presence of Anopheles minimus mosquito, which breeds in running channels and streams with clean water. The mosquito species left the area because 615.94 square km of the state’s forest area was deforested. The number of malaria cases here have reduced substantially, says Nagpal.

The area is now home to Anopheles culcifacies, which gets attracted towards animals. “Change in ecology is so fast that the vectors have to adapt quickly. A span of four to five years is enough for them to change,” he adds.

This apart, “increase in global temperature is turning favourable for mosquitoes as warm temperature helps in their reproduction,” says Adak.

Industrialisation and urbanisation has also resulted in mosquitoes switching hosts—from monkeys to human beings, from cattle to human beings and vice versa. “It was bound to happen—people have occupied many areas which were once habitats of monkeys. So, mosquitoes have quickly changed hosts,” says Sujatha Sunil, senior scientist with the International Centre for Genetic Engineering and Biotechnology, New Delhi.

A study done in 2012 by the zoology department of Governmental Dungar College, Rajasthan, states that Anopheles annularis, which used to feed on human beings as well as animals in 1980s and early 1990s, now feeds only on animals. With reducing animal population, mosquitoes have developed a liking towards human beings, says Sunil.

The female mosquito needs blood protein to lay eggs. As long back as 1972, British scientists had found that Anopheles gambiae was attracted to type O blood group. This was published in Nature. Studies also show that it likes the blood of people who sweat more. This apart, men are more likely to be bitten by it than women. Sleeping habits of humans, their odour, large exposed areas of warm skin and accessibility of capillary blood vessels are other reasons affecting their behaviour. Its choice of host also depends on extrinsic factors such as availability, its flight range and resting habits.

Researchers at the Johns Hopkins Bloomberg School of Public Health, the US, found last year that the virus present in the mosquito which causes dengue increases its lust for blood. The activated genes of the mosquito also enhances its sense of smell and improves its feeding skills. In another study, published in the journal PLoS Pathogens this year, researchers analysed the mosquito genes before and after being infected with the virus. They found changes in 147 genes.

Viruses and their mutations

For Indian scientists, such gene mutation of the dengue virus is a matter of big worry. “Change in gene pattern, observed mostly in central and southern India, has weakened the effect of medicines available for treating dengue,” says R K Ratho, head of virology department at Post-Graduate Institute of Medical Research, Chandigarh.

There is a lineage shift in the Indian strains of the dengue virus, say scientists of Kerala in a study published in Virology Journal this year. The evidence is based from clinical cases from Kerala. In northern states such as Punjab, Haryana, Chandigarh, Himachal Pradesh and Jammu Kashmir, studies on genetic mutation of viruses in mosquito-borne diseases are yet to be conducted, says Ratho.

“Whenever there is immunity against any virus due to genetic change, a variant emerges,” adds Sunil. “It is a continuous process. Only research can tell what effect the mutations have”.

Studying virus mutation pattern in India is difficult because there is not enough reference material from the past. “We do not even have genetic markers for Indian mosquito species and viruses,” she says. Genetic markers are genes which identify species. This apart, the country still uses old technology for new research, she says. “But the problem in India is that researchers and bureaucrats do not work in tandem. Result: unsuccessful public health programmes, which lead to nowhere.

It’s not that research is not happening, but shortage of manpower, especially entomologists, is a big setback, says Adak. Vector Science Forum, which started in 2010, is at present funding 14 projects on vector-borne diseases. This includes studies by the Kerala unit of National Institute of Virology to determine vector of dengue and chikungunya viruses in Kerala; two projects by Desert Medicine Research Centre, Jodhpur.

Nagpal is working on a project to control dengue and chikungunya by controlling mosquito breeding in key containers in pre-monsoon season in one of the endemic zones of Delhi.

Meanwhile, the blood-sucking pest has more than doubled the cases of dengue in the past decade, shows the health ministry’s data. Cases of malaria and chikungunya, however, have reduced. Mosquito-borne diseases have their highs and lows. They break out, then become silent for sometime, and then emerge again with strength.

The country witnessed chikungunya in an epidemic form in the last millennium. Its cases have reduced now. In 1963, the disease struck Kolkata; in 1965 Puducherry and Chennai suffered in Tamil Nadu, Rajahmundry, Vishakhapatnam and Kainada in Andhra Pradesh, Sagar in Madhya Pradesh and Nagpur in Maharashtra, and in 1973, Barsi in Maharashtra was hit by the disease. Thereafter, sporadic cases continued. The disease completed its cycle and came back with strength in 2006 with 1.4 million cases. After 2006, chikungunya cases reduced.

Little research has been done to understand the impact of changing weather patterns on the pathogen. In “Fifty years of dengue in India”, a study published in 2012, scientists A Chakravarti, R Arora and C Luxemburger of Maulana Azad Medical College, New Delhi, compared the decadal data of dengue from the 1960s to 2000s. It states, the disease is caused mainly by four viruses—DENV 1, 2, 3 and 4. These have circulated in India for decades, but have had high and low periods. In 1960s, DENV 1 was dominant, followed by DENV 3, DENV 4 and DENV 2. By 1970s, circulation of DENV 1, 3 and 4 reduced and that of DENV 2 increased. From 1970s to 1980s, DENV 1, 2 and 3 increased till 1980s. In 1990s, it decreased again. DENV 4 remained silent from 1970s to 1990s. In 2000s, all viruses circulated in maximum quantities, with DENV 3 peaking among all viruses.

The four viruses have different manifestations—DENV 1 gives classic dengue fever, DENV 2 gives hemorrhagic fever with shock, DENV 3 gives fever without shock and DENV 4 gives fever with shock or profound shock. The viruses live inside the mosquitoes but do not hurt them. They spread the disease through saliva as they bite human beings. Understanding which strain is prevalent at what time would aid better diagnosis and treatment.

But the snail’s pace at which the country is treading shows the disinterest of the government on the issue. In 2010, at the meeting of Vector Science Forum, V M Katoch, director general, ICMR, had said that effective health programmes can be formulated only after refering to research by entomologists. Three years later, not much has changed.