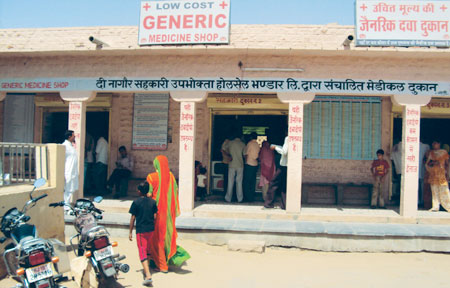 The district administration of Nagaur has managed to free the public health system from the stranglehold of pharma companies by adopting a multipronged approach. Doctors were persuaded to prescribe only generic medicines and these drugs were made available by opening GMSs in governmentrun health centres and hospitals.

Earlier, doctors were prescribing drug brands of reputed pharma companies, saying generic drugs do not have the right potency. Last October, the district administration appointed a panel of medical experts to identify pharma companies that manufacture quality generic drugs. The experts drew a list of 57 such companies and prepared a list of 570 drugs commonly prescribed by doctors. The listed companies were then invited to supply drugs through open tenders. The companies quoting lowest prices bagged the contracts (see table). To make sure doctors follow orders, their prescriptions are scrutinised regularly; the chief medical officer of Nagaur submits a weekly report on medical prescription patterns to the administration.

That the system is working well could be seen at the primary health centre in Basni village, nine kilometres from Nagaur city.

A long queue of patients waited outside the doctor’s room. Javed, a labourer, approached the doctor with symptoms of food poisoning. Mushtaq Ahmed, the doctor, directed him to the GMS at the health centre with the prescription. The medicines cost Javed Rs 67. “The same drugs would have cost him Rs 200 if he were to buy branded ones,” said Ahmed.

The generic drug store in Basni is proving a big hit ever since it became operational on May 5. It is giving the private chemists shops a run for their money. Sanjari Medical Store, a private drug store near Basni health centre, closed within a month of the GMS becoming functional. “We closed because our business went down,” said Fatima, whose son used to run the store. “We used to earn up to Rs 2,000 a day. After the GMS opened, our profits were down to Rs 100-150 per day,” she added. Another private store nearby, National Drug Store, is about to close for the same reason.

The GMS at the government hospital in Nagaur has similarly affected sales of the private drug store across the road. “My sales are down 60 per cent,” said Rahul Sharma of JP Medical Store. Seeing the success of GMSs, the chemists’ association of Nagaur is now offering generic drugs at prices 50 per cent less than the printed cost and has asked the authorities to publicize this. 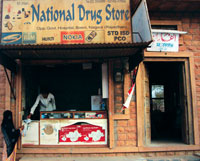 The concept of GMS is the brainchild of Samit Sharma, Nagaur’s district collector, who first introduced the scheme in Chittorgarh district where he served from July 2008 to September 2009. “I realised drugs are not costly, they are just overpriced,” said Sharma, a doctor by qualification. He said most government doctors were prescribing medicines by brand name which prevented competition and created monopoly in the market. This enabled companies to put a very high retail price on their products. Sharma decided to break the system to make drugs affordable.

The GMSs in Nagaur are self-sustaining. The bulk-procured drugs are sold after adding 20 per cent administrative and handling charges to the lowest tender price. This generates sufficient revenue to meet the pharmacists’ salary, electricity charges and other expenses. “The project also generates some profit which is used to add more low cost drug outlets,” said Rajiv Soni, district programme manager of the National Rural Health Mission in Nagaur.

The GMS experiment has also helped decrease the medical expenditure on pensioners in Nagaur. Data provided by the district treasury office showed the state saved Rs 39.22 lakh between October 2009 and March 2010 on health spending under the state pensioners’ medical fund. The scheme provides pensioners and their spouse free medicines worth Rs 5,000 a month. Incidence of pensioners exceeding the Rs 5,000 limit has decreased 40 per cent in a year after drug costs decreased, said K Paliwal, the district treasury officer.

Another state where efforts to decrease spending on drugs has paid off is Tamil Nadu. The Tamil Nadu Medical Services Corporation, set up in 1994, procures affordable drugs through open tendering. The corporation has drawn a list of 260 generic drugs; hospitals can ask for drugs outside this list only in special circumstances like treatment for kidney ailments and cancer, said K Gopal, managing director of the corporation. Twentyfive of the 32 districts in the state have warehouses for storing generic drugs. Hospitals are allowed to draw a month’s supply at a time. Branded drugs can be purchased in special circumstances.

But there are some practical problems in promoting generic drugs. Some healthcare experts believe going generic is not the long-term solution for providing affordable medicines. C M Gulhati, editor of MIMS, said generic medicines can be prescribed for single-ingredient products like aspirin. In the case of combination drugs, brand names would have to be prescribed (most generics are single ingredient drugs). It is not possible to write detailed composition and accurate quantities of each ingredient in prescriptions, he said.

Besides, all drugs patented after January 2005 are monopoly products. Marketing their generic versions is banned till the patents are in force. The generic drugs also do not cover many life saving combinations. “Some of the latest patented drugs may provide better relief in case of diseases like cancer, AIDS and diabetes,” said Dara B Patel of the Indian Drug Manufacturers Association (IDMA).

Jyoti Mirdha, member of Parliament from Nagaur, cautioned that the Nagaur model is only a stop-gap measure.

“If this measure becomes a rule, it could prove counter productive, as India does not have an anti-trust law like the US,” she said. The law discourages companies from forming cartels and fixing the price of a product.