In the months of August and September 1994, panic gripped the country as news of the plague epidemic in Surat spread. Few had cared to ponder over the possibility that the Latur earthquake would have a deadly sequel. That the rodent-borne disease which had struck its deadly blow as far back as 1966 would rear its lethal head again. But happen it did. And can happen again! Is there a solution? What? Vigilant surveillance? Greater hygiene awareness? Rodent extermination or control? In this two-part analysis, covering a recent study of what actually happened last year, Down To Earth examines diffvrent aspects of the plague problem 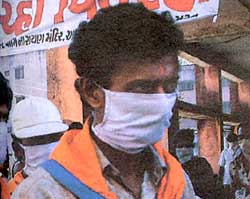 The flea that flayed

PLAGUE. It is a word that strikes terror in the hearts of most people. With its connotation of immense suffering and images of certain death, plague has always been associated with poverty and filth. That it should erupt in this day and age is undoubtedly a blot on the health standards of any country.

An infectious fever caused by Yersinia pestis, plague is primarily a disease of rodents transmitted by contact with a rat flea. The disease in humans has three clinical forms - bubonic, characterised by swelling of the lymph nodes, pneumonic, in which the lungs are extensively involved, and septicaemic, in which the bloodstream is so invaded by the bacteria that death occurs even before the bubonic or pneumonic forms have had time to appear. The cycle, rodent-flea-rodent as a rule is enzootic, present in the rodent community at all times but occurring in only a small number of cases. However, under certain environmental conditions it reaches epizootic proportions where it effects many animals in any region at the same time.

When plague broke out in Surat recently, predictably, it took both, the health authorities and the suffering, ill-informed masses by complete surprise. Despite initiating effective containment measures, the government made no effort to isolate, identify or characterise the causative agent either at the beginning or any other stage of the epidemic, giving rise to much speculation as to whether it was a plague epidemic in the first place. But by the time the Technical Advisory Committee (TAC) was constituted by the government to investigate the reasonq for the outbreak, the epidemic had died. It was against this background that the TAc, under the chairmanship of V Ramalingaswami, set out to examine the causative agent. The committee was directed to furnish details on what caused the outbreak besides outlining strategies to control and prevent future outbreaks. But the final clinching evidence could only be obtained after isolating the plague bacillus, a feat that involved extensive research work, which was carried out mainly at the Gwalior based Defence Research and Development Establishment (DRDE). Studies were also conducted at the wHo International Collaborating Centres for Plague; the Centre for Disease Control (cDc) in the us; the Institute Pasteur, Paris and the Plague Surveillance Centre, Stavropol (Russia). These studies were made jointly by the Indian scientists and A scientists in those centres. Since there was no access to freak clinical material, scientists had to rely on specimens thatweA collected earlier from patients in Surat with a suspected attack of pneumonic plague.

These clinical samples were collected and grown into In cultures of cells. Colonies of the organisl responsible for the outbreak of plague we probed and all the characteristics show colonies firmly established that it was Ypestm proteins (an antigen produced specifically by pestis) were attached to fluorescent antibody molecules which got highlighted on binding with these proteins confirming the presence of the strain. Lysis (breaking down) of the bacteria by a Ypestis specific virus further established the identity of the strain.

Two unusual features were revealed in the Surat isolates. An extra protein band in the 25 Kilo Dalton (KD) region and Ribotype S, a distinct ribotype (a type Of DNA found in bacteria)were observed in these isolates which had not been present in Indian strains of earlier episodes.

That the pneumonic outbreak in Surat was due to the Ypestis was established beyond doubt. But doubts persist about its origin. The hypothesis put forth says that in Beed the earthquake distuibed the pre-existing equilibrium between the wild and domestic rodents and fleas. Therefore, the large supplies of foodgrains available to domestic rodents, as a result of the displacement of the inhabitants, resulted in a striking growth in the Todent population. Consequently, a heavy flea nuisance erupted and rodents began to die, resulting in an outbreak of bubonic plague. In Surat, the unprecedented heavy monsoon resulted in the death of several rodents and other animals whose carcasses came in contact with the local residents who helped in clearing them once the floods receded. Moreover, a large migrant labour force from the neighbouring Maharashtra state (the scene of the first outbreak) to Surat may have also been responsible for spreading the disease. The annual Ganapati festival that followed resulted in the huge crowds converging and probably transmitting the infection further. The validity of these speculations is still to be established, though.

What are the lessons highlighted by this unexpected, recent setback in public health? The TAc report is fairly clear in its indictment. A flawed health management system. Among the reasons it enumerates are, an appalling complacency towards so called "coriquered" diseases, a lack of preparedness to identify the causative agent in such outbreaks, poorly developed public health laboratory services resulting in insufficient research into and diagnosis of disease-causing microbes, the absence of an integrated multi-level surveillance system and inadequate networking institutions and experts, poor information dissemination to generate public awareness and ineffective mobilisation of resources to combat an existing or a potential outbreak.

What is urgently needed to avert, thwart or pre- vent such health catastrophes? "A truly national sur- veillance and response system in India for infectious diseases," is the unequivocal conclusion arrived at by the advisory committee.

In order to create such a system, the committee suggests a national debate to explore the weaknesses of the existing surveillance system. This should be foi lowed by the formation of a national apex committee on surveillance and response for the control of plague with specialists and experts drawn from different disci ples, including government and non government sectors. Another important requirement in creating epidemic pre paredness would be to ensure co-ordina tion of work between National Reference Laboratories and a network of other lab ra orates and linking them with WHO Reference Laboiatories.

The TAC report also recommends research into traditional systems of medicine for possible discovery of active chemical compounds against plague and other infectious diseases which could help in bolstering the campaign against, plague and other such deadly diseases.

When dealing with the issue of how to prevent the re-emergence of plague, one needs to bear in mind that the enemy we are dealing with is a quiescent one. It has been known to resurface often, after long, deceptive lulls. To get to the root of the problem would therefore be in the best interests of everyone.