Illegality in an anti-insurgency college of Chhattisgarh

Illegality in an anti-insurgency college of Chhattisgarh 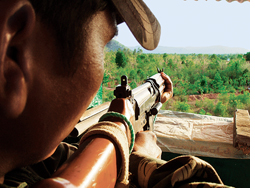 A journalist's work is often frustrating. Leads are a plenty, but most get nowhere. Once in a while though, one does hit pay dirt. Here is one such experience. During the last two years I have had many opportunities to visit the College of Counter Terrorism and Jungle Warfare at Kanker in Chhattisgarh. I was always impressed by the chief of the college--Basant Kumar Ponwar--and his trained commandos.

After his retirement from the Indian Army, Ponwar is now on deputation with the Chhattisgarh police. Before this posting he was the head of the Counter Insurgency and Jungle Warfare School in Warengate, Mizoram.

He says "Chhattisgarh's ex governor, K M Seth contacted me at Warengate one day. He wanted to send over some candidates for commando training to deal with the increasing Naxal violence in Chhattisgarh. I suggested that a few training sessions would not be sufficient. The forces would need training on an ongoing basis.And this is how the Kanker college was set up."

The ex-brigadier continues "I teach the men to fight a guerrilla, like a guerrilla." That is the main agenda of this jungle warfare college."
At Dantewada, I saw Ponwar's wards in action they provided an impressive contrast to the ordinary pot-bellied policeman. There was something reassuring about the confident way they shook hands with me.

Meeting the brigadier also left me with an overwhelming sense of pride. To see that to this day our country has officers like him the dedication and integrity of his wards towards the task at hand was exemplary.

I kept up our acquaintance. On one of my visits, Ponwar took me to the top of a hill. He told me, "I am having this hill dug up, to make a helipad." The ex-army official shared with me the outline of a Rs 72-crore project to set up the College of Counter Terrorism and Jungle Warfare. He informed me about the elaborate plans for a swimming pool, an auditorium and a guesthouse.

"When you visit next, you will not have to look for another place to stay," Ponwar told me in his inimitable style.
As journalists we tend to dig wherever we can and the digging of the hill by Ponwar inspired me to do some on my own. I wondered if the law was being followed in setting up a huge project on what looked like forestland. I found out that the settlement for this land was made in 1921-22, when it was known as village Gadh Pichhwari, and Singarbhaat. According to the old settlement, the two villages comprised about 140 ha, of which 68 ha was a forest.

In the recent settlement, the name of village Patharri has been added, and the size of the forest has reduced to 45 ha acres (about 37.5 ha covered with large trees and 17 ha with small trees). The old records make no mention of this village. It seems Patharri village came into existence much later.

The process for transferring the land to the police department began on May 25, 1998, when Kanker's superintendent of police wrote a letter to the district collector (reference 7/98). The department wanted this land for building a police residential colony. OnDecember 4, 1998 the collector, changed the land-use status of this tract from forest to residential.

Anyhow, allotment to the police department was approved by the District Planning Committee in a meeting on April 4, 2001. Satya Narayan Sharma, the then Chhattisgarh minister for higher education, was present at this meeting. It was announced that the district forest officer (dfo), Kanker, had given a no objection certificate for the change of usage, vide letter reference 2578/4.8.98. 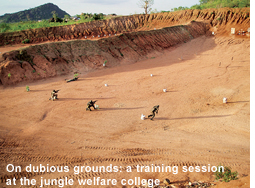 But by 2001 Kanker had a new dfo. And thus began an interesting exchange of letters between the new dfo and the district collector. On April 7, 2001, she wrote to the district's collector (vide letter reference DO M C/10), "The patch of land between village Patharri, and Singarbhat....was surveyed jointly by the patwari of the revenue department, and the deputy forest ranger and found suitable for inclusion in forestland. Subsequently this land has been transferred to the forest department. As such, the transfer of this land...is [in] breach of the Forest Conservation Act of 1980."

The collector replied on May 8, 2001 vide reference 344/reader/2001 "According to the letter reference F-16-10/7/2a/90 dated 13/8/1991, of the revenue department, the land with small and large trees has been freed from the protection of the Forest Conservation Act. However if an appeal is made against the transfer... I have no objection."

The dfo responded the very next day (vide letter reference MC/2001/591). She noted "According to a ruling of the Supreme court, dated 12/12/96,in the case of Godavarman vs Government of India, if the revenue department changes the land use/ownership of Forest land with small or large trees, then it will be considered not only a breach of the Forest Conservation Act 1980, but also of the structure put in place by the Supreme Court."

She added "Kindly refer to letter number 16-10-7/2A/90 dated 13/1/97 of the revenue department of the government of Madhya Pradesh, to the district collectors, for carrying out the directive of the supreme court, regarding the validity of any change in land ownership/usage... Please also refer to letter number 311/10/3/2000 dated 21/1/2000 wherein it is clearly indicated that land covered by small and big trees within the revenue land area will also be considered as forestland under the protection of Forest Protection Act of 1980. In view of the above situation, please do take necessary action at your end." After this exchange, the dfo was transferred, and the College of Jungle Warfare and Counter Terrorism is functioning on the said land.


Last year when Chhattisgarh's chief minister, Raman Singh, was planning to participate at an event at the college, a senior official in his office expressed reservations. The chief minister should desist from associating with an institution built on "illegal land", he said.

The official also wrote a letter to the Kanker's collector, calling for an explanation. He wrote back on June 15, 2006 "We are soon to initiate the matter of the transfer of land with the Central Environment and Forest Ministry."

But Ganesh Jain, the patwari in Kanker, said, "No decision regarding the land occupied by the Jungle Warfare College, has been arrived at. But they continue to occupy the land."

Ponwar is nonchalant. "I am not aware of any issues regarding the land. I will do my work on the land given to me," he says.

We want a school for every child. We also want a school for our soldiers. But is it too much to expect that a college set up for people responsible for ensuring law and order, be set up on legally sound foundations? After all this school teaches them to fight those who do not follow the law.

The article was first published on the website http//www.cgnet.in