In hope of benefit-sharing

In India, there has been a cautious move towards handing over control of natural resources to local communities

In hope of benefit-sharing 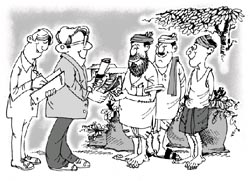 after an extensive consultation process involving stakeholders, the Central government has brought about a legislation, the Biological Diversity Bill, 2000, with salient features relating to access to biological resources of the country and securing sharing of benefits with local people. This has come as a result of public pressure and realisation within the government that the current policies of bureaucratic control are failing.

India is a signatory to the Convention on Biological Diversity signed at Rio de Janerio on June 5, 1992, the main objectives of which included fair and equitable sharing of benefits arising out of utilisation of genetic resources. But in India there has been a cautious move towards devolving control over natural resources to local communities. As such no clear mechanism exists for ensuring just and equitable sharing of benefits with the locals and regulating the process of biological prospecting.
A number of options for regulating benefit-sharing and biodiversity prospecting in the country can be sought which may include the following:

- Access regulation as has been mentioned in the Bill would enable local communities to safeguard their biological and intellectual resources, and to claim adequate compensation for them. In this regard recognising local community rights over "common property", like pastures, forests and water bodies, would go a long way in ensuring equitable benefit-sharing and provide a powerful incentive to these communities to conserve.

- A number of possibilities for generating financial returns for local communities exists. This can include fees to be paid to them at the time of collecting material or knowledge; royalties paid out of profits made from derived products; subsidies from government for biodiversity related activities; financial rewards for innovations; and insurance and credit systems can help communities who are conserving and using their resources sustainably. - Non-financial returns can include efforts to introduce socially and ecologically appropriate improvements in local technologies and practices which are already widespread and are getting greater attention in the context of the concerns raised regarding biodiversity. Such enhancement is especially being thought of in the context of medicinal plants and other non-timber forest produce. In the Biligiri Rangaswamy Hills of southern Karnataka, for instance, local groups are helping tribals to switch from selling the raw materials for the famous Ayurvedic medicine, Trifala, to processing these materials into some intermediary form so that they can get a better price.

- Benefits accruing to disadvantaged communities, traditional heelers' groups and other organisations not directly involved in biodiversity prospecting should not focus solely on financial benefits, which can often create conflicts. Where possible, benefits should take the form of infrastructure and capacity building, and should work through established and on-going community efforts.

- Biodiversity prospecting, drawing as it does on unique natural resources, must serve the national good. In order for this to happen, some form of national policy must exist. This must involve all stakeholders since it is not possible for each institution to undertake the responsibility of setting and implementing national priorities. It is important, however, that this process is not unnecessarily restrictive. The point is not to discourage utilisation, but to ensure that it is done in line with widely accepted principles. Benefits accruing from biodiversity prospecting as well as related economic activities should, where possible, aim to stimulate economic development in the most disadvantaged parts of the country. This might be through collection agreements, establishment of sustainable sourcing programmes and training.

- The complexity of benefits derived from biodiversity prospecting must be recognised, and their wide but effective disbursement over time and within different sectors in society may be seen as the most likely manner in which to achieve the diverse and highly ambitious objectives detailed in the Convention.

Biodiversity prospecting should be undertaken only as part of collaborations involving a great deal more than fees for samples. Many of the most significant benefits of biodiversity prospecting result from the research process. It is also important to recognise that institutions such as the creation of the National Biodiversity Authority, as has been mentioned in the Bill, are better placed to deal with the implications of sustainable use and equitable sharing of benefits and it may be appropriate to restrict activities to established institutions as opposed to individuals. Capacity for research and development must be strengthened by biodiversity prospecting. Indeed, this is one of the most significant benefits that can result from these activities. Universities, science councils and companies can collaborate and coordinate their efforts in order to improve the country's position in this field. If well structured, the research community could play a strong and active role in the international biodiversity prospecting arena. This requires co-operation within and between the many disciplines.

If a framework is not made to hammer out a transparent mode of regulating the use of indigenous knowledge, cultural traditions and biological diversity, the benefits that can be derived from benefit-sharing and the prospects of biodiversity prospecting may well remain just a pious hope.