In search of the palatable atta

An agricultural scientist discovers why some rotis are tastier than others

In search of the palatable atta 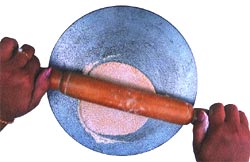 Imagine this is the India of the 1970s. The lush green of high-yielding rice and wheat varieties is spreading far and wide in the Indo-Gangetic belt. The much-awaited green revolution is on in full swing. Godowns in moffusil towns as well as cities are filled with sacks of imported pl-480 wheat thanks to the introduction of Mexican wheat germ plasm/varieties in India.

But there is a jarring note in this depiction of plenty. There are almost no takers for the contents of the overflowing Food Corporation of India wheat godowns. The reason: In the 1970s people were reluctant to use Mexican wheat varieties for preparing chapattis (flat, unleavened Indian bread). They found that the grains were reddish, the dough became discoloured on keeping; and chapattis prepared from Mexican wheat to be brown to dark brown in colour, brittle and not 'sweetish' to chew. This was in contrast to chapattis prepared from traditional wheat such as the Pb, k and np series varieties available at that time. These had bold amber grains, the dough did not darken on keeping; and chapattis made from these were found to be creamish in colour, soft, and 'sweetish' to chew.

Intrigued by the problem, Yash Pal Abrol, a young scientist at the New Delhi-based Indian Agricultural Research Institute (iari), decided to investigate. The reasons for Mexican wheat not having the desirable qualities for making chapattis were quite obvious. These wheat varieties had been primarily bred for making either bread or biscuits. Accordingly, these were either hard or soft wheat (according to the basic characteristic of the seed storage protein, gluten).

Abrol's enquiries also revealed that Mexican wheat varieties contained two to three times more polyphenol oxidase, an enzyme known to cause poor keeping quality of dough and discolouration of chapattis. Subsequently Abrol and his team developed a simple test, called the phenol test, to help plant breeders screen grains with low phenolase activity. They presented this test at the All India Wheat Research Workers Workshop in 1971 held at Hisar, Haryana.

But the top echelons of the Indian agricultural scientific community as well as politicians, were of the opinion that the need of the hour was to augment foodgrain production rather than address the issue of quality. Therefore Abrol's objections at agricultural meetings on the quality of exotic wheat grains were muzzled. After all, how could one dare talk about quality when the country was struggling just to feed its teeming millions. Not minding the criticism, Abrol personally found satisfaction in getting to the root of this "trivial" problem before plunging himself into more "scientific" forays.

Cut to 2002. Abrol is on a private trip to London to visit his son. To his utter surprise, he finds that Indians in the uk are plagued by a familiar problem: rotis made from wheat grains available there are hard and brown in colour. He does not waste much time in understanding why this is so: uk wheat varieties have similar characteristics to the Mexican wheat types that were imported to India in the 1970s. Bread and biscuits being the primary wheat products, scientists in the uk did not consider it necessary to breed especially for chapatti quality atta (flour).

There are about three million Asians in the uk -- a majority of them from the subcontinent. For Indians and Pakistanis, at least one meal consists of chappattis. But the chappattis made from the wheat flour available there were tasteless and hard, and nobody knew why till Abrol visited his son.

On the basis of his earlier expertise acquired in the 1970s, Abrol decided to take up their cause. Much to his chagrin, his efforts to highlight the issue through the British media and represent the same to British food authorities initially yielded little result. When he wrote to the firms that were selling atta in the market, their technical staff defended the quality of their product and pointed out that wheat bred for bread and general purposes (read: animal feed) was being used to make chapattis.

By and large, the opinion of the manufacturers was that they could not be bothered about the quality of chapattis as long as they did encounter any problem marketing their atta. One company executive even told Abrol, "We have received no complaints from our customers and our marketing department is fully satisfied with the sales, and we don't understand why you should be worried!" Some other "experts" attributed the difference to soil nutrient levels in uk and India.

Abrol then decided to write to Sue Salmon, the head of the milling section of Camden and Chorley Food Research Association, a public funded organisation similar to the Central Food Technological Research Institute in Mysore. Salmon agreed that "available varieties are developed primarily for bread, biscuits or animal seed stuff" and felt that the atta market was not sufficiently large enough in the uk for wheat breeders to invest in developing varieties specifically for this application. She also admitted to being aware of the role of the enzyme, polyphenol oxidase, in darkening dough and chapattis, and agreed that uk wheat varieties contained high levels of this enzyme.

Abrol's efforts finally paid off when a sympathetic miller came forward to say his "Indian clients deserved a better quality product," and agreed to explore the means to improve the quality of wheat flour used for making chapattis.

With the uk incident fresh in memory, Abrol returned to India and decided to do a literature survey of scientific papers published since the early 1970s on the topic of chapatti quality wheat flour. He was shocked to find that except for a couple of papers, no new work had been undertaken in India since then. But, scientific papers on bread and biscuit quality wheat varieties were aplenty, clearly indicating the obvious choice of the Indian scientific community. The reason is simple: commercial interests in atta are limited. Abrol also reveals that a team of non-resident Indians in the us has gone ahead and patented a process for mechanised wheat milling for chapatti quality flour. Seems like roti atta too is going the basmati way.