Will India toe the US line of capping carbon emissions from farming? 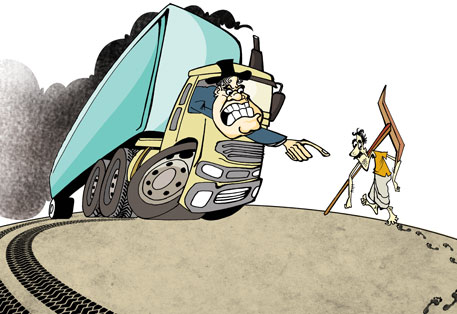 India seems to be bowing out of its long-standing position on climate change, as far as the farm sector is concerned. On January 19 this year, the Prime Minister’s Council on Climate Change, in its first meeting since it was re-constituted under the current government, discussed cutting emissions from the agriculture sector. The proposal was put forth by the Union Ministry of Agriculture.

Over the past few years, developed countries have been campaigning to force developing countries to cut emissions from agriculture and livestock. Till now, India has vehemently opposed bringing farm emissions within the ambit of climate action in an effort to safeguard its farmers, who are mostly small and marginal landholders. This has been an important component of its international climate position.

The new proposal, if accepted, will dilute India’s position on the matter.

According to World Resources Institute’s (WRI’s) 2011 data for sector-wise emissions, agricultural emissions account for 15 per cent of total greenhouse gas emissions worldwide. The same institute ranks electricity and heat sector as contributing 36 per cent of total emissions. Total greenhouse gas emissions from India in 2011 were 2,486.17 million tonnes of CO2, of which the agriculture sector accounted for 14 per cent. In line with the global trend, the energy sector was responsible for 77 per cent emissions.

The Western countries, led by the US and the EU, have pressed for the need to reduce emissions from the agricultural sector as they consider it a “significant” proportion of the total emissions, especially in developing countries that have substantial area under agriculture and large population of livestock.

But now, with the latest proposal to discuss reduction in agricultural emissions, India seems to be giving in to the developed countries’ agenda. On a general note, climate negotiations are West-centric. An overview of the climate talks makes this clear. The cornerstone of the climate regime, enshrined in the UN Framework Convention on Climate Change, is the principle of equity. This principle advocates “differentiation”, meaning it recognises the historical responsibility of Western countries to address climate change while taking into account developing countries’ right to growth and their need for financial and technological support from developed countries to undertake domestically suited climate actions.

However, from the Kyoto summit in 1997, which was the first comprehensive global summit on climate change, to the Lima summit in December 2014, this landmark principle of equity has been diluted. Developed countries have nearly succeeded in bringing all countries, whether developed or developing, on the same platform to address climate change. Instead of focusing on historical emissions, current international climate change negotiations are deliberately focused on current emissions, in the process denying developing countries their basic right to grow and develop.

India, like other developing countries, has meekly bowed down to the Western countries’ ploy of altering the course of the climate talks to suit their interests. The Lima climate change summit testifies to this.

In the final text adopted at Lima, the principle of differentiation expressed in the legal language as “common but differentiated responsibility” has the additional phrase “in the light of national circumstances”. This is touted as one of the major outcomes of the Lima summit, where the Western countries in a rather hegemonic manner re-interpreted the basic principle of the 1992 UN Convention.

Thus, in one stroke the rich countries shrugged off their historical responsibility to address climate change, limiting the developing countries development right. It is against this backdrop that the latest proposal in India to discuss cutting emissions from the agriculture sector needs to be understood. Though it has not been approved yet, it could very well happen in future meetings. If approved, this could be disastrous for developing countries in view of the approaching Paris summit this December, where a new climate agreement is scheduled to be formalised.

With growing economic and political clout, India is a crucial player in the climate regime. The meeting of Prime Minister Narendra Modi with US President Barack Obama on occasion of the Republic Day was crucial in this regard, when both leaders reiterated the need to address climate change and hoped for a successful outcome in Paris. Now in the run up to the summit, India must not under any circumstance give in to the demands of the West to further cut its emission targets or announce its peaking year or add agricultural emissions under climate action.

It is high time India got its act together in securing its right to develop and be energy sufficient. It should fight to bring equity back on the climate agenda by agreeing for a review of “intended nationally determined contributions” and play a pivotal role among developing nations to secure an inclusive and fair climate deal.