ON September 22, around 50,000 people gathered at Kharo Chaan, 150 km southeast of Karachi in Pakistan, for quite an unprecedented festival the Jashn-e-Indus Delta. Politicians and experts paid tributes to the river Indus, diyas (earthen lamps) were floated, a fair number of young men and women even danced in ecstasy. The event, organised by the Pakistan Fishworkers Forum, had special significance abundant rains this year had provided people of the Indus delta their share of freshwater after eight long years. Floods that followed the rainfall had swept away a recent bane the intruding water from the Arabian Sea.

Many, however, fear that the respite might be short-lived. "The damage is very high and the Indus delta needs continuous freshwater to be fully rehabilitated," says Naseer Memon an environmentalist with the international ngo, lead.A report of the International Conservation of Union's Pakistan chapter (iucn-p) puts the delta's problems in perspective . "The sea has intruded 54-km upstream along the Indus's main course. That this incursion is taking place against the gradient of the riverbed indicates an absence of any retarding factor such as a considerable volume of freshwater in the riverbed. The fundamental cause might be the progressive upstream diversion of Indus's waters and the gradual depletion of freshwater discharges downstream of the Korti barrage--the last of a series of barrages on the Indus," the report notes.
"Earlier, freshwater would reach our area in March and paddy cultivation would begin in May. But after the Sukkur barrage came up in the 1930s (see box Laid waste), freshwater began reaching us in April. And when the Kotri barrage came up in 1955, flows stopped completely," recalls Ghulam Mohammad a 69-year old Kharo Chaan resident. Many like him believe that this town in Thatta district of Pakistan's Sindh province is named after the salty water from the sea-- kharo in Sindhi means salty and chaan is a natural waterway. 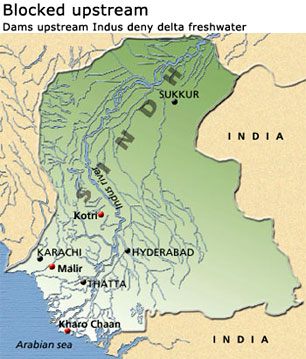 "After the mid-1990s, the delta has not received significant rains to rehabilitate its ecosystem. So, the problems created by the diversion caused by the Kotri got compounded. The aquifer also did not receive freshwater and turned saline due to perpetual tidal sweep. The sea encroached rapidly into productive land and aquifer rendering both unfit for human use," Memon says. Lack of drinking water, agriculture and pastures forced thousands to abandon their homes and migrate. According to government statistics, about half-a-million hectare (ha) has been deserted, but Memon believes that's an underestimate. "Local people say that at least twice that amount of land's been deserted," he points out. "At least 40 per cent of our land has become barren whereas Punjab has witnessed a 40 per cent increase in its land," says Mohammad, indicating the schism between Punjab and smaller Pakistani provinces.

"The 1991 water accord signed by provinces of Pakistan made it mandatory that 10 million acre feet (maf) of water should flow downstream Kotri barrage into the Indus delta and the Arabian Sea. But this has happened only thrice during the last 15 years," says Tahir Qureshi, director, coastal ecosystem, icun-p.
"However, after this year's unusual rainfall, the Indus swelled and irrigated the riverine areas downstream Kotri barrage up to the Arabian Sea. The mangrove forests were inundated and the fisheries sector has got a new lease of life. Fish will have lots of microorganisms for food," says Qureshi.

"Farmers and fisherfolk of the delta hope to have good days ahead," says Abdul Majeed Kazi a farmer from Hyderabad district. Many who had abandoned the riverine agricultural lands have a silt cover to sow rabi crops after several years. Their delight is palpable. "About 700-800 marriages have been arranged in Hyderabad district of Sindh province alone," says Kazi.

The promise of prosperity has made many recall good old days. "Here in Kharo Chaan there were tens of thousands of livestock. Boats laden with wool, ghee and butter would go to Karachi everyday. Grain was even exported to Iran," reminisces Mohammed. Arif Hasan, a town planner, who has written extensively on environmental issues, corroborates this. "Agriculture was seasonal and yields were high. It was carried out when the rivers receded. Rice was the main crop and most of it was exported to the coastal regions of India and the Persian Gulf," he says. Timber was another major export from the delta to Muscat, Aden and the Kutch peninsula.

"Prior to partition, Kharo Chaan had a medical officer, a police officer, a revenue officer, a forest officer and land and customs officers as well. We also had a post office. We have nothing today. There is only a dispensary that is very often short of medicines," complains Mohammed.

In neighbouring Keti Bundar, farmers grew rice in pre-partition days and trade with the Persian Gulf countries flourished. Fishing and livestock rearing had a secondary importance, but this was prior to the construction of dams and barrages upstream. But today this town of about 3,000 is marked by abject poverty. "I have no earnings. I have to make do by selling crabs. But almost all my daily earnings are taken up by the daily expenditure on fuel for the boat. The middleman says how can I give you flour when you don't have money," says Sultan, a fisherman from Keti Bundar.

Drinking water to the town is supplied by tankers that come from its outskirts. The people have to pay Rs 600 per tanker, says Karim, a Keti Bundar resident, who works as a middleman in the tanker business. "But in the rainy season, a tanker costs Rs 2,000 and the local people have to pay as much as Rs 15 for a 25-litre container a major portion of their earnings goes in buying drinking water," he says.

Karim also deals in fish. He purchases the catch in bulk from local fishermen and transports it to Karachi, where it is auctioned. "Prawn and several kinds of fish are available at Keti Bundar but their rates fluctuate according to those prevailing in Karachi," he says. About 1,000 kg of fish is transported in one trip. It costs Karim Rs 3,000. When the going is good, he sends two Datsuns to Karachi every day. But when the catch is small, one pickup is dispatched after every two days.

The riverine area (katcha) downstream Kotri barrage covers an area of about 255,000 ha. The area, a flat plane along with the course of the Indus, extends on either side in varying widths ranging from 5 km to 160 km of a flood-prone area. The forests provide timber, firewood, pit props for mines, forage and browse for livestock, tannin from bark, gum and honey. Shrubs and bushes are spread on an area of 35,000 ha."These forests in the past have been very thick and extensive and have been supplying charcoal to the Persian Gulf countries as well as some Indian cities, according to a recent publication of the Pakistan Fisherfolk Form, Indus Delta An environment assessment.

Today, the delta does not receive freshwater required for its mangrove forests, fishery, paddy rice and orchards. The silt load brought by the Indus has also reduced considerably, adversely affecting once rich pastures in the delta. According to Sindh irrigation and power department, the silt load was 400 million tonnes in 1880-82. After the construction of Sukkur barrage, it dropped to 225 million tonnes in 1940-54. It was further reduced to 100 million tonnes in 1977-92 following the construction of the Tarbela Dam. From 1992 onwards, the silt load has not been more than 30 million tonnes. Indus delta's productivity has suffered as a result. "It is now merely 20 per cent compared to good old days and this applies to fishery, agriculture and mangroves," says Iqbal Saeed Khan, a former director of the Sindh Environmental Protection Agency. Before dams and barrages were built, tributaries of the Indus crisscrossed the delta. Qureshi says that the Indus flowed with 13 tributaries into the Arabian Sea. The discharge from the river was large enough to affect the ocean currents up to over a hundred miles from the shore. 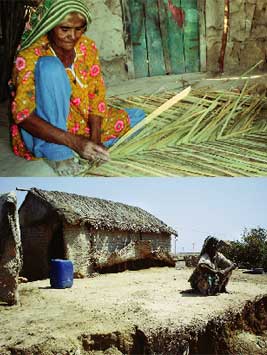 But today, only one tributary of the Indus, Khober, is functional, that too, only for two to three months; it becomes a creek carrying seawater for the rest of the year. "Only one of the eight mangroves species native to the region survives today. It won't be long when even this will be consumed by the desert," says Qureshi.

There has been a persistent decline in the socio-economic conditions of the local population, the Mohanas, said to be the oldest inhabitants of the Indus civilisation. "Most of the younger generation today suffers from malnutrition," says Mohammed.


The fate of people like Mohammed makes little difference to the Pakistani government. It is bent upon building new dams. Experts point out that the lucre of kickbacks afforded by mega water and power projects is difficult to ignore. "Building infrastructure projects in the developing world is a us $200 billion business. It provides numerous opportunities for corruption. According to Transparency International, infrastructure is perceived to be the most corrupt sector globally.

Approximately half of the World Bank anti-corruption unit's investigations that have led to specific corrective actions were linked to infrastructure projects. Bribes are paid to secure concessions and kickbacks are provided in exchange for contracts," points out Patrick McCully, executive director, International Rivers Network.