Away from human interference, the virgin Arctic islands are, ironically, more polluted than the distant industrialised settlements. And the reason is a filthy secret 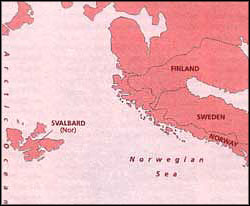 THE Arctic islands of Svalbard may be far from the madding crowd but are more polluted. Birds nesting on this last stop before the North Pole produce highly toxic faeces which build up layers of heavy metals on lake shores and peat bogs. And fish in the islands' many lakes contain more poisonous mercury and toxic organo chlorines such as pesticides than any in Europe.

The Arctic is rapidly turning into a long-range dustbin not just for Europe but for many other parts of the planet. The reason for this is a quirk of the planetary circulation system that causes some of the most lethal chemicals known to human beings - many of them now banned in Europe and North America- to end up in places such as Svalbard 1,000 km inside the Arctic Circle.

Scientists are gradually piecing together a picture of Arctic pollution from scattered fragments of research conducted in the region.This spring John Birks of the University of Bergen Norway presented to the European Union the results of research on toxins in lakes right across Europe from Spain to Svalbard. He found the gradient of the continent to be such that a greater concentration of toxins occurred in the north leaving the south -which houses industrial zones - relatively cleaner.

Meanwhile, Alistair Headley of the University of Bradford, UK, has also been at work in Svalbard. In an address to' a conference in Cambridge in February, he said that he had found concentrations of lead, nickel, copper and zinc at up to 200 parts per million (PPM) in the peat bogs of Svalbard adjacent to colonies of sea birds such as kittiwakes and gulls. The levels reflected closely those found in the birds' faeces and in the food they ate.

There is more. In 1992, Norwegian researchers in Svalbard found that the islands' famous colony of 5,000 polar bears had accumulated concentrations of polychlorinated biphenyls (PCBS), chemicals once widely used in the electronics industry, at upto 90 PPM, the highest in the world.

Svalbard is 1,000 km from the nearest land and 2,000 km from the closest industry. So where does it all come from? One answer is the phenomenon known as Arctic haze. Each winter, pollution from cities and metal smelters across Europe and Siberia form a smog that rides on the winds across the Arctic. Some of the pollution precipitates along with the ice and snow. In spring, it all melts and the toxic flush into the sea and lake waters is taken in by fish, and in tum by birds, sea mammals and polar beats.There is a biological concentration effect says Headley, of between a thousand and a million tonnes between the Metal concentrations in the seawater and in the bird shit and peat bogs."

But there is more to it than thatsaysBirks. Some pollutants notably pesticides appear to come not from Europe or North America but from the tropics. He believes that there is a global process that is systematically transferring these chemicals from warmer to colder areas.

The evidence is everywhere. Last July Canadian biologist David Schindler from the University of Alberta published findings which said that fish such as turbot and trout in remote lakes of the Canadian province of Yukon contained levels of the pesticide toxaphene that are 10 times higher than the safety limits set for Canadianfood.

Schindler also found that the fish had high concentrations of other pesticides no longer used in North America such as DDT as well as PCBS and mercury.The more lakes we investigated, the more problems we found, said Schindler. He has called for a thorough survey of the region's thousands of lakes. "There may be 200 native communities at risk which eat fish from these lake she said. I believe screening of all northern lakes should now bed one."

His dramatic findings emerged after a routine survey of fish in Lake Laberge, near Whitehorse where toxaphene concentrations reached 2330 parts per billion. Comparisons with neighbouring lakes found that those with the longest food chains had the highest concentrations of toxins in the fish because at each stage on the chain the concentration was increased.

Toxaphene is the major organochlorine contaminant in Arctic marine and freshwater biota," says Derek Muir of the Canadian government's Fisheries Institute. A complex mixture of chlorinated camphenes, toxaphene has been banned in Canada since more than a decade. Muir says that most of the toxaphene in the lakes of the Canadian Arctic probably comes from soils in tropical Asia and Latin America, where it is widely used. Like other chemicals surfacing in the Arctic, toxaphene readily evaporates, especially in hotter climates. Once in the air, it stays there for weeks or even years, until it reaches colder climates. There, probably at some critical temperature, it condenses out, and ends up in the ice.

In this mahner, thousands of tonnes of toxic chemicals are making their way into the Arctic regions. The entire atmospheric circulation system is operating like a giant distillation experiment in a chemistry laboratory. For the planet, it provides an immensely useful service. It cleanses tropical soils and the atmosphere off many poisons. But only at the cost of chronic pollution in the vulnerable ecosystems and native populations in the once- pristine Arctic.

More evidence comes from the barks of trees. Last September, Ronald Hites from the University of Indiana, US, published the results of an investigation of pesticides in the barks from 90 sites around the world. Pesticides such as toxaphene that readily evaporate were found in their highest concentrations not near where they are applied to crops, but thousands of kilo metres away on the edge of the Arctic. Hites saw this as further evidence of the global distillation effect".

According to Frank Wania from the University of Toronto in Canada levels of the industrial chemical hexachlorobenzene "are higher in Arctic plants than temperate and tropical ones".

Once they reach the Arctic, the poisons concentrate in the food chain reaching their highest levels at the top of the chain in the body fats of birds, polar bears and humans. Organochlorines in particular accumulate in body fats and cannot easily be purged from the body. Wania says researchers have found more lindane another pesticide in Arctic seals than in the seals of the North or Baltic seas which are normally regarded as being much more polluted.

But old male polar bears seem to be the worst victims. They may live for30years or more eating poisoned fish all their lives. Females pass some of the poison on to the next generation through their placentas and in their milk. Males just keep on accumulating.Canadian polar bears -like their Svalbard cousins -have more PCBS in their bodies today than 30 years ago when PCBs were widely used in Canada. Many scientists believe that the accumulation of these chemicals has not only been the reason behind the mysterious deaths of many animals in the northern waters innocent years but it has also rendered some male mammals infertile.

Organochlorine pollution of the Great Lakes in the us and Canada is held responsible by scientists for the disappearance of beluga whales in the St Lawrence Sound which links the lakes to the Atlantic Ocean. It was probably also behind the mass death oftens of thousands of seabirds in the Irish Sea in 1969. The chemicals are now banned in Europe and North America and their levels in soils and rivers are falling causing a revival of wildlife populations such as otters and eagles.

Ironically there is less data on humans than on some other Arctic species. But Muir has found disturbingly high levels of toxaphene particularly in the milk of nursing Inuit mothers. He reiterates the point that the further north one goes the higher the levels become. Levels among women in the north of the Canadian province of Quebec are now five times higher than in the more industrialised south of the province.

Much more poison may be on the way north. Already the northeast Atlantic Ocean stretching right into the Arctic Circle is probably the largest reservoir of PCBS in the world today. Ultimately some scientists believe almost all of human kind's production of many volatile toxic chemicals could end up in the Arctic region. And that means for instance some 370,000tonries of PCBs have been manufactured and discharged into the environment over the past 60years. Wania argues that there should now be worldwide bans on some of the chemicals turning up in very high quantities in the Arctic such as toxaphene.