Is the alarm justified?

Yes. The disease is spreading fast. Yet there is little scientific data to devise a strategy to deal with it

Is the alarm justified? 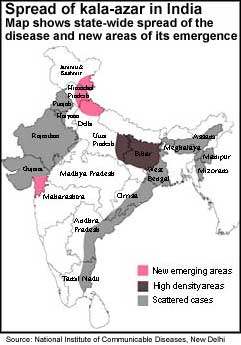 According to data from the National Institute of Communicable Diseases ( nicd ), Delhi, and the government of Bihar, 54,650 cases were reported in Bihar in 1990 and 59,611 cases of kala-azar in 1991. However, the numbers were placed close to 250,000 by an expert team constituted by the government of India in 1991. The team was chaired by C P Thakur, head of the Kala-azar Research Centre of Balaji Utthan Sansthan, Patna, who is now a member of Parliament.

With only one in five cases being recorded, discrepancies in statistics are to be expected, adding to the difficulty of assessing the magnitude of the problem. The most recent government data for Bihar records 15,485 cases for 1997 and 6,750 cases in 1998 (till May). Whatever the exact numbers may be, Bihar is definitely the worst-hit state (see table: Bihar: a state of turmoil ).Kala-azar cases are coming in not just from northern Bihar, which has invariably been the worst hit area in the past, but from all the districts of the state. "While northern Bihar is in the grip of kala-azar, southern Bihar is suffering from malaria. Both the diseases are poised to reach epidemic proportions," says Mahabir Das, former director-in-chief of Bihar's department of health. "The next epidemic will be a more virulent type as the disease has spread in all directions," says Thakur.

Kala-azar is now crossing geographical boundaries. From the plains of northern Bihar, it has spread to most parts of Bihar. In West Bengal, 1,647 cases were officially reported in 1991. A study by nicd , the principal national research authority for diseases such as malaria and kala-azar, shows that 181 cases were brought to Delhi hospitals in 1995. Uttar Pradesh, Mahrashtra, Tamil Nadu and Assam have also been affected, and Karnataka reported its first case in 1990. It is possible that kala-azar spread to these states through migrant labour populations from Bihar. But how the disease actually spread remains open to debate.

Earlier considered limited to villages, urban areas are also reporting cases of kala-azar now, nicd data shows. nicd officials point out that all cases reported in Delhi pertained to people residing outside the city. They claim kala-azar poses no threat to Delhi because urbanisation leads to a decline in kala-azar, using the reasoning that development leads to a decline in disease.

However, N L Kalra, kala-azar expert and consultant to the Malaria Research Centre in Delhi and also to the World Health Organisation, differs. "It is hard to say whether they are impor-ted cases or not. nicd has only collected data [in Delhi]. It is regrettable that they stopped there. They should have conduc-ted epidemiological studies and traced the origin of the cases."

" P argentipes (the sandfly) is prevalent throughout the country," Kalra points out. And urbanisation can mean an increased risk of transmission, he says. "Chances of picking up infection and transmitting it to another person are very high. In an urban area, risks are much higher [than in rural areas]." Kalra postulates that the lack of cattle in urban areas means that humans will be the source of blood for the sandfly.

From a global perspective, kala-azar remains in the background as a poor person's disease. Economic and political agendas determine which diseases are researched and those that are to be left out. Tropical diseases get a backseat in international research ventures. Tore Godal of who 's Tropical Disease Research ( tdr ) programme in Geneva sheds some light on the situation: "Despite the fact that 90 per cent of the global disease burden occurs in the tropics, only about 5 per cent of global health research and development investment is directed at reducing that burden."

Besides, most drugs to treat kala-azar are not reliable any more. About 40-50 per cent of the patients have developed resistance to drugs available in the market, says T K Jha, medical director of Kala-azar Research Centre, Muzaffarpur. Another worrying aspect about chemical drugs is their toxicity and side-effects.

The first line of treatment is the drug sodium antimony gluconate ( sag ), to which patients have stopped responding. The second-line drugs - pentamidine, amphotericin B or allopurinol - are more toxic than sag .

P R Arbani of the South East Asia Regional Office of who in New Delhi points out that the transmission dynamics of kala-azar are not clear.

He questions why a cluster of houses in Bihar can be found affected by kala-azar while houses 50 metres away have no kala-azar. But, before international attention comes, the national programme must also be strengthened. At present, there is no separate government programme for kala-azar. Control of kala-azar falls under the National Malaria Eradication Programme ( nmep) , and is seen simply as a side-benefit of malaria control.