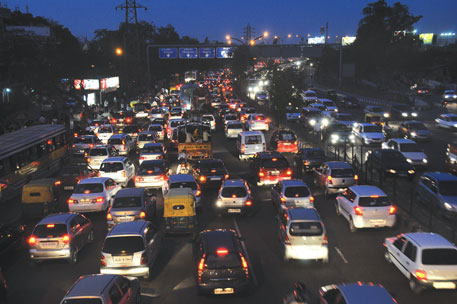 To curb heavy traffic on city roads, the Union Ministry of Urban Development is considering levying charges on car users, who occupy maximum road space. The ministry has issued a policy advisory in this regard to state governments for adoption based on its potential and viability. The advisory has been prepared by the ministry’s autonomous body, the Institute of Urban Transport.

Congestion charge is a fee levied on entry of vehicles to a legally defined zone where heavy traffic causes delays, waste of fuel and time, and pollution. The charge is expected to decongest such zones. For instance, people may avoid the congested areas or shift to public transports like bus or Metro. A study by the School of Planning and Architecture (SPA), Delhi, shows imposing a congestion fee of Rs 10 will reduce traffic flow by 20-25 per cent in Connaught Place, Delhi’s financial hub. Several global cities, including Singapore, Stockholm and London, have successfully implemented the scheme (see ‘To London’s relief’).

Congestion charge was first proposed in the National Urban Transport Policy of 2006, but then the ministry did not take it on board. This time, the move seems to have received impetus from the 12th Five Year Plan, which proposes introduction of congestion charge and hiking of parking fee to control the use of personal transport and thereby augment public transport. The Plan suggests analysing forms of road pricing followed worldwide to manage mobility in large cities. A study by urban infrastructure consulting firm Wilbur Smith Associates for the ministry in 2008 forecasts that by 2030 the peak hour traffic speed in large cities in the country is likely to drop to 6 kilometres per hour. This means traffic in these cities will virtually come to a halt.

Experts agree on the benefits of congestion charge but doubt if the scheme can be successfully implemented owing to the huge differences in the size of cities, their population and travel patterns. They emphasise on introducing a strong public transport system to make the scheme effective. P K Sarkar, professor at SPA, says it is important to scientifically estimate traffic reduction through congestion charge. “Proper knowledge and handling of logistics and administration and management of such a system are also imperative.”

Piyush Kansal of RITES Limited, an engineering consultancy enterprise of the Government of India, says, “We tend to underestimate the intelligence of our commuters and their willingness to pay. People in metropolitan areas need good infrastructure and are ready to pay extra for it. This is evident from surveys done in Mumbai for transport infrastructure. We were ready for congestion charging five years ago, but no attempts were made.” Kansal emphasises on informing people about the benefits of congestion charging and on implementing the scheme in phases.

There are substantial costs associated with implementation of congestion pricing, related to technology, public outreach and alternative modes of transport. But benefits to society are also immense, which include reduction in congestion, pollution and fuel consumption, time saving, increase in revenue from the charge as well as from fares from improved public transport ridership. The balance between the costs and benefits will help cities take a decision. A strong public transport system can clinch the deal.