Dolphins, the most playful and beguiling mammals of water, are on the verge of extinction. Awareness programmes will go a long way in preserving the species 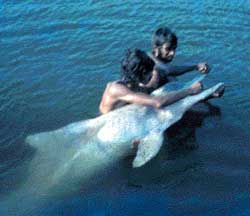 as the long, sleek-bodied dolphins break the surface of water to rise ten metres in air and swoop down again to its depths, children break into squeals of joy while adults gasp at the swiftness of their motion. But how many dwell on the painful and rigorous training that these mute mammals might have undergone to thus delight and thrill the audience?

Unfortunately, such visual feats may soon be a thing of the past as dolphins, all over the world, face threats of extinction. Conservation experts, reportedly, fear that tourism is taking its toll on the animals and soon a study will be conducted on how tourism is affecting the 100-strong population of dolphins in Port Phillip Bay, near Melbourne in Australia. Australian environment and conservation minister Sherryl Garbutt said the Sustainable Dolphin Tourism in Port Phillip Bay programme would ascertain whether tour operators' activities were having a detrimental effect on the bay's bottle-nosed and common dolphins.

The highest number of dolphin deaths is reported from the south Pacific where they get snared in the purse seines used for tuna catching. In India, river dolphins, particularly the Ganga river dolphins (Platanista gangetica) have been dwindling at an alarming rate. While thousands of them were found in the depths of the Ganga-Brahmaputra river system in the last century, a Worldwide Fund for Nature (wwf) survey puts their number at 2,500 only. In mid 1999, in Vellapatti, a coastal village near Tuticorin, 45 carcasses of common dolphins (Delphinus delphis) were washed ashore. This was the first case of such mass mortality of these peace loving, harmless mammals at the Tuticorin coast. Again three of the same species were killed in Mahabalipuram, Chennai, and fishermen from Beypore beach in Calicut were prosecuted for killing three more.

Yet, how is it that these aquatic animals, which are killed with such regular frequency, are found to be man's best friend? In Italy, recently, a boy was saved by a dolphin in the Mediterranean sea. And this is not an isolated incident for there have been numerous accounts of the dolphins' heroic deeds documented in celluloid and print. Yet, ironically, humans have been the largest predators for these mammals. Some kill them for their meat and oil, others kill them for feeding on their catch. But majority of them are killed accidentally, out of sheer ignorance on the part of the fisherfolk, who come in constant contact with these fun-loving, frolic-filled animals at the river and the sea.

It is amazing how people in general, and forest officials, in particular, know nothing about these marine animals. When a public interest litigation was filed against the fishermen of Beypore beach in Calicut for killing three members of the common dolphins it was difficult to convince the forest officials, including the district forest officer, that dolphins are wild animals. They are included in Schedule 1 of the Indian Wild Life Protection Act, 1972 and killing dolphins or eating their meat is a non-cognisable offence attracting a five-year jail term and a fine of Rs 5,000. The World Conservation Union (iucn), too, has declared dolphins an endangered species in 1996.

The Gulf of Mannar, one of the richest regions in India for marine bio-diversity located along the southeast coast of India, houses 14 species of the Delphinidae family. Common dolphins come to the inshore waters frequently for feeding. This is an oceanic species widely distributed in tropical to warm temperate waters of the world.

Although isolated stranding of common dolphins has occurred in Indian waters, the 1999 incident is totally different and unique. Such huge mortality of 45 dolphins including males, females, juveniles and newly born is a unique case and is a clear indication of a diversion of their route or some unusual happenings in the coastal environment. So far, six stranding of common dolphins have been reported from the east coast of India and nearly 145 specimen were caught accidentally at different times in gill nets near Quilon in Kerala from 1982 to 1987.

Many theories have been propounded to explain this mass mortality. Among them the most plausible is that the mammals might have migrated offshore for feeding on sardines, anchovies, and other pelagic species. When such marine animals move to the shallow waters, in certain seasons for feeding, there are high chances of them getting stranded because their echolocation facility fails to work. The latter is a special attribute of the dolphins who send out sonar waves which hit on objects in their path and come back to be registered in their brains. This is how dolphins locate themselves vis-a-vis their surroundings.

Moreover, scales of fishes and beaks of squids found in the gut contents of the stranded animals indicate that the dolphins had entered the shallow coastal region for feeding. It is here that they most often get stranded.

It was also interesting to note that the anchovies, sardines and squids, which form the favourite food for common dolphins were found in good quantities in the inshore waters of Tuticorin at the time that the dolphins were stranded. Moreover, this mass mortality of dolphins has occurred during full moon. Due to shallowness of the coast, a wide area is exposed during the low tide on the full moon day. If the stranding of common dolphins has occurred during the lowest low tide, their chances of going back to the deeper waters were bleak.

According to a recent survey conducted along the Kerala coast, at least 1,000 dolphins are killed every year mainly in the gill nets. The number of humpback dolphins (Sousa chenensis) is dwindling alarmingly, mainly because these are near shore species often entering the estuaries and backwaters. Studies show that the young ones are more susceptible to getting entangled in the gill nets as they are inexperienced and playful. Often the fishermen cut the caudal fluke or the flippers of the dolphins and release them back into the sea to die.

Dolphins, despite their sophisticated echolocation capabilities, often get entangled in the gill nets. These nets have floats and sinkers and stand like a wall in the sea for three to four kilometre. India has about 2.2 million gill nets along the coast. These nets are transparent and the dolphins' flippers and beaks get cautht in the nets. Moreover, the dolphins often get entangled while trying to take the fishes caught in the nets.

The dead dolphins are used to extract oil from their blubber which is then sold for Rs 50 or Rs 200 a kg depending on the availability of oil and socio-economic profile of the customer. "The dolphin oil is popularly used as an aphrodisiac, as a fish bait and also for medicinal purposes," says Jaspreet who is looking after the river dolphin research project in wwf. It is also used for soap making and tanning. Its meat is sold at Rs 15-20 a kg.

The greatest number of dolphin deaths are reported from the purse seines operating in south Pacific for the tuna fishes. Around two to three million dolphins are killed in the purse seines every year.

As the Indian Ocean is declared by the International Whaling Commission as a sanctuary for whales, fishing for dolphins and whales in the Indian Ocean is prohibited. But many fishermen are not aware of this. It is quite feasible to bring down the mortality rate of this remarkable animal if awareness programmes are initiated. The Dolphin Protection Committee has arranged awareness programmes and informed the people about the death of the animals in the gill nets. The wwf, too, is carrying out awareness programmes, says Jaspreet. "Fishermen need to be taught that dolphins are at the apex of the food pyramid and killing them will destroy the entire marine food chain," she said. The wwf has started a six-month project on creating awareness and education on dolphins.

But unfortunately, many fishermen consider dolphins to be their enemies and intentionally hunt them as they feed on their catch. What they fail to comprehend is that it is we, human, who are encroaching on the dolphins' natural habitat and taking away a share of their feed.

Dolphins, particularly the Ganga river dolphins (Platanista gangetica), are threatened by a rapid destruction of its habitat. "Construction of dams, barrages in rivers have genetically isolated the dolphin population. Because of the sluice gates and other obstructions in the river, dolphins are no longer able to move about freely.

"They are restricted to particular zones and this has lead to their dwindling numbers," says Jaspreet. The shrinking waterlevels in rivers is also squeezing them out of their habitat. There is also a heavy rate of siltation caused by massive deforestation in the catchment areas. Increased navigation in rivers, too, cause deaths to a number of these creatures. Besides, the extremely polluted river waters do not actually provide ideal living conditions for these animals. Bio-accumulation of trace elements like lead, arsenic, mercury are also playing their part in gradually reducing the vitality and health of the dolphins. "The river dolphins are especially susceptible. They feed on small fishes which themselves feed on polluted materials. This slowly leads to an accumulation of toxic elements in their bodies which gradually cause them to die," says Jaspreet.

Apart from such biological hazards, dolphins also have to cope and fight with human avariciousness and their bizarre needs. Man makes use of dolphins for entertainment and pleasure. They captivate and train them to keep them in dolphinariums which have now spawned into a multi-billion dollar business. Many of these freedom-loving, sensitive animals die in captivity as they cannot bear the strain of such rigorous training.

Unfortunately, there is very little political support in conserving the dolphins. Although the Wildlife (Protection) Act, 1972 mandates dolphin conservation as a priority issue, there has been no focussed endeavours towards its conservation.

When so much importance is paid globally to the protection of the marine mammals, heavy losses of such an intelligent animal should be a great concern. To protect this group and to preserve the bio-diversity in the marine biosphere reserve of the Gulf of Mannar, some strategy should be developed for the protection and preservation of this mamal so that such mass mortality is avoided.