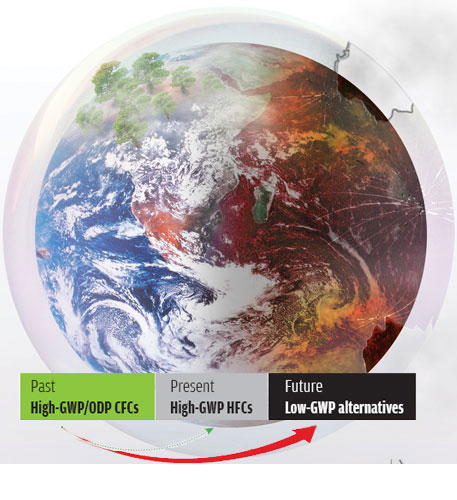 THE WORLD is at a crossroads. Just like in 1990. That year, countries agreed to phase out the use of gases like chlorofluorocarbons (CFCs) that deplete the ozone layer of the atmosphere. Ozone protects the earth by blocking ultraviolet radiation that can cause diseases like skin cancer, damage crops and threaten the lives of other organisms.

CFCs, used as refrigerants, are also super greenhouse gases. A molecule of the most commonly used CFC—CFC-12—is 10,600 times more potent in causing global warming than a molecule of carbon dioxide (CO2).

Under the Montreal Protocol, an international treaty to protect the ozone layer, developed countries phased out the production and consumption of CFCs by 2000 and developing countries by 2010. Countries moved from CFCs to hydrochlorofluorocarbons (HCFCs). HCFCs were touted as an interim solution as they were less harmful to ozone than CFCs. But they too caused global warming. The global warming potential (GWP) of HCFCs is a thousand times that of CO2 but comparatively less than that of CFCs.

But in 1990, countries had the option to move to a completely different type of gases called hydrocarbons to replace CFCs in the refrigeration and air-conditioning sectors. Hydrocarbons, such as butane and propane, are excellent refrigerants which do not deplete ozone and have very low GWP. But the economic interest of the developed countries and multinational companies triumphed, and instead of non-patented hydrocarbons, patented HCFCs were forced on every one.

Since 2004, developed countries have started substituting HCFCs with hydrofluorocarbons (HFCs). HFCs are again patented fluorinated gases pushed by multinational companies. Though they do not deplete the ozone layer, they have high GWP, comparable to HCFCs’ and in some cases higher. Most developed countries have moved to HFCs. Now it is the turn of the developing countries.

The question is whether India should move to HFCs.

HFCs: too hot to handle

At present, the total contribution of HFCs to global warming is about 1 per cent. But with the scheduled phase-out of most HCFCs by 2030, it will increase.

HFCs are fast replacing HCFCs in refrigeration and air-conditioning equipment, blowing agents for foams, aerosol sprays, fire protection systems and solvents. Between 2004 and 2008, CO2 equivalent emissions of HFCs increased by nearly 8 per cent annually, mostly in the developed countries. At present, 80 per cent of all HFCs are emitted by developed countries but the contribution of developing countries is increasing sharply.

According to various studies, the emissions of these gases, if unchecked, could reach between 3.5 billion tonnes and 8.8 billion tonnes CO2 equivalent per year by 2050, contributing 7 per cent to 19 per cent of the total greenhouse gas emissions in a business-as-usual scenario. For comparison, the current emission of all greenhouse gases in India is about 2 billion tonnes CO2 equivalent. So, HFCs are a serious threat to climate and need to be urgently tackled at the global level.

What should India do?

India has the option to move to HFCs but it will not pay in the long run. HFCs are one of the gases whose emissions are regulated under the UN Framework Convention on Climate Change. India has no mandatory obligations to reduce emissions under this convention. In the near future, however, India will have to take obligations to reduce emissions. It will then have to phase out HFCs because they are super greenhouse gases.

However, they are flammable and this has been the most significant barrier to their widespread application. In 1990s, the fluorinated gas industry used the flammability scare to kill the development of hydrocarbons. To support its companies, the US till recently banned the use of hydrocarbons as a refrigerant. Thankfully, Europe and some Asian countries went the other way.

Companies have found that hydrocarbons can be used safely in applications ranging from household refrigerators and air-conditioners to commercial and industrial cooling and foam blowing. They have done this by redesigning the equipments as well as by training technicians to ensure they follow safety guidelines.

Obviously, addressing flammability entails additional costs but these costs are offset by lower gas prices and superior performance. This is precisely the reason companies across the world are moving to hydrocarbons. In domestic refrigerators and freezers the use of hydrocarbons is rapidly increasing. Globally, close to 50 per cent of all new products use hydrocarbons. In India, Godrej has sold close to 10 million iso-butane refrigerators without any fire-related accident.

In polyurethane foams sector, HCFCs are being substituted with hydrocarbons in developing countries. Indian companies are moving to cyclopentane.

It is quite clear that it would be rewarding, both economically and energy-wise, for India to make a one-time transition from HCFCs to non-HFC options like hydrocarbons. The million-dollar question is: will India leapfrog or will it keep protecting the interests of a few companies to the detriment of the whole sector?