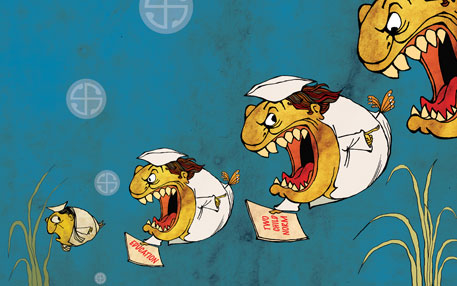 On the face of it, the laws appear progressive. But experts say that they are just a mechanism used by state governments to keep institutions of local self governance in check. The trend is not new and Rajasthan is not the only state in the country to have passed such laws. On November 9, 2014, Gujarat made voting compulsory in municipal and panchayat elections. The law goes against an earlier provision of the same government which called for electing local representatives by consensus, instead of polls. Under the provision, titled Samras, a village gets Rs 10 lakh if panchayat members are chosen through consensus.

The beginning of such laws can be traced to the late 1990s when several states barred people having more than two children from contesting municipal and panchayat elections. The rule was conceptualised as a measure to check population. Whether it helped or not is yet to be assessed, but many studies have indicated that marginalised classes—women, dalits and minorities—have been targeted by such provisions. A study by Delhi-based non-profit Hunger Project showed that till 2007, about 900 women in Madhya Pradesh and 800 in Chhattisgarh had been disqualified for violating the two-child norm.

“We have documented hundreds of cases where elected women, dalits, and people belonging to the minorities were made to resign. Cases of forced abortion, abandonment of children, divorce, forging of birth certificates also became rampant due to such laws,” says Shaheena Parveen of Hunger Project. “The 73rd amendment of the Constitution ensured reservation of 50 per cent seats for women at the local level, but such provisions have come under attack by draconian laws made by states,” she adds.

Parveen is working in Bihar on issues

related to women empowerment. There are cases that substantiate her point. In 2011, Rehana Khatoon, 35, was removed as ward councillor in Patna’s Phulwari Sharif municipality after the birth of her fourth child. “I had three daughters when I was elected ward councillor,” says Rehana. “Desiring a boy, my husband compelled me to have another baby. Later, the state election commission removed me from the post,” she says.

“In another case in Gaya district, a dalit woman representative was removed in 2010 through a conspiracy by opposite parties. They forged documents to show that the woman had had her third child after she got elected. But this was not the case,” says Parveen.

In 2005, the Union Ministry of Panachayti Raj issued an advisory to Madhya Pradesh, Himachal Pradesh, Andhra Pradesh, Odisha, Maharashtra, Rajasthan, Chhattisgarh and Haryana to do away with the two-child policy. But only Himachal Pradesh and Madhya Pradesh have done so. In 2007, Bihar too introduced the policy in urban local bodies, with the promise to include such provision in panchayats.

Right to remove is another provision which has faced severe opposition. The rule, which is in force in all the states of the country, empowers bureaucrats to remove elected representatives on criminal or corruption charges, says S C Behar, former chief secretary of Madhya Pradesh.

In the absence of clear guidelines, the rule is often used by bureaucrats, at the behest of their political bosses, to target leaders belonging to opposition parties. “There are no defined regulations to implement this law,” says Amitabh Singh, a Bhopal-based social worker who studied the impact of the provision. “Bureaucrats make arbitrary rules and officials of sub-divisional magistrate rank are empowered to remove elected representatives,” he says. 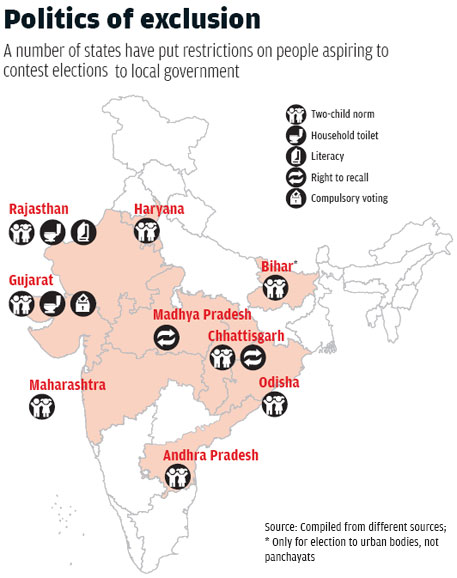 In 2010, while hearing the case of Sharda Kailash Mittal, who was removed from the post of councillor in Madhya Pradesh’s Muraina district on charges of corruption, the Supreme Court termed the removal illegal. “The judgement pointed out that such laws are an insult to local democracy,” says Singh.

“During the British period, the government had the right to dissolve elected bodies. This provision reminds one of that era,” says Behar. After the 73rd Amendment in 1993, states cannot keep local bodies in a dissolved state for more than six months, but the removal provision has raised new questions, Behar adds. “Empowering bureaucrats to remove elected representatives belittles the democratic process. Empowering gram sabhas to remove its representatives would have been a better move,” says Ved Bhardwaj of Hunger Project. Madhya Pradesh has a similar provision in its panchayat rules under which people can be allowed to recall their representatives to local bodies. But the provision has not been implemented.

Yogesh Kumar of Bhopal-based non-profit Samarthan says such laws are aimed at keeping local governance weak. “The Centre does not want strong states and the states do not want strong local bodies,” says Kumar. “We call it a politics of exclusion,” says Subhas Mendhapurkar, a Himachal Pradesh-based social activist working on local governance issues. “The class which wields power imposes its wishes to exclude those who are weak.”

Experts also argue against the educational and compulsory voting provisions. The literacy criterion is another way of telling women and tribal people not to contest, says Renuka Pamecha of Jaipur-based non-profit Vividha. Nandana Reddy, convener of Karnataka-based Gram Panchayat Hakkathay Andolan goes a step further and says the rule is unconstitutional. “Literacy certificate is not the sole criterion of being intelligent, nor does it guarantee incorruptibility,” she says. Similarly, the compulsory voting provision of the Gujarat government has not found much support. “The decision is not going to stand the test of law,” says T R Raghunadan, former joint secretary in the Union Ministry of Rural Development. “It is constitutionally unacceptable. If I have the right to vote, then I also have the right to not vote,” he says.

B K Sinha, who is working for strengthening local governance in Bihar, offers the clinching argument: “Why doesn’t the government implement such provisions for MLAs and MPs?”