Ministry in a hurry

Ministry in a hurry 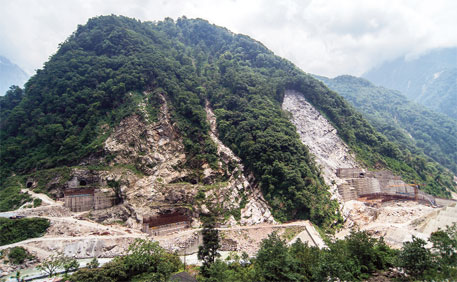 Giving in to demands made by the governments of Sikkim and Andhra Pradesh, the Union Ministry of Environment and Forests (MoEF) seems to be reducing the size of protective zones around national parks and wildlife sanctuaries so that development projects can bypass the mandatory wildlife clearance.

As per orders of the Supreme Court, no project can be allowed within 10 kmÃ”Ã‡Ãªof the boundary of national parks and sanctuaries withoutÃ”Ã‡Ãªthe approval of the National Board of Wildlife (NBWL), the highest body on wildlife regulatory issues, unless a site-specific Eco-Sensitive Zone (ESZ) is notified around that park or sanctuary. Once an ESZ is notified, developmental activities inside it are regulated as per the notification. But the court order has been openly flouted in Sikkim. At least five dams were started near protected areas (national parks andÃ”Ã‡Ãªsanctuaries) in the state between 2006 and 2011 without NBWL permission (see map).Ã”Ã‡ÃªWhen NBWL raised objection last year, MOEF did not take any action. Instead, it issued draft notifications on ESZsÃ”Ã‡Ãªon February 21 and March 12, ensuring that theÃ”Ã‡Ãªdams fall outside the zones.

In total, MOEF has notified nine ESZs in Sikkim and Andhra Pradesh between January and March 20 this year. For the eight parks and sanctuaries in Sikkim, the ministry declared ESZs merely up to 25m-200m from their boundaries. For the Pulicat sanctuary in Andhra Pradesh, the ESZ spans up to 2 km from the boundary, allegedly to allow construction of a major port bypassing NBWL clearance.

A site-visit report by the NBWL standing committee on Teesta IV dam, which lies within 6 km of Khangchendzonga National Park and Fambonglho Wildlife Sanctuary in Sikkim, pointed outÃ”Ã‡Ãªin August last yearÃ”Ã‡Ãªthat at least five more dams were coming up within 10 km of the sanctuaries without NBWL approval. Several more dams are proposed in the region, says the report.

The Khangchendzonga National Park has the world’s third highest mountain peak. Protected areas in Sikkim are also home to wild animals like the snow leopard, Himalayan black bear, Tibetan antelope, barking deer, flying squirrel and the red panda. They harbour 5,000 species of flowering plants, and the lakes and rivers in these protected areasÃ”Ã‡Ãªare considered sacred by local communities.

The NBWL standing committee report demanded that work on all dams inÃ”Ã‡ÃªtheseÃ”Ã‡ÃªareasÃ”Ã‡Ãªbe stoppedÃ”Ã‡Ãªand an inquiry constituted by the ministry to find how the NBWL clearance was bypassed. It also recommended to MOEF that all the proposed dams in the state be assessed by NBWL for their cumulative impact on wildlife and clearances not be given in a piecemeal manner.

While no action was taken on the NBWL report, Sikkim extensively lobbied with the MOEF to get its proposal of 25m-200m ESZs notified. MOEF did send the proposal back to the state for modification but Sikkim refused to change them.

The state government has defended the small sizeÃ”Ã‡Ãªof ESZs. “Eighty-two per cent area of Sikkim comes under forest cover. Unlike other states, we are only left with 18 per cent of the total land for cultivation, settlements or development activities. Besides, 30 per cent of the state comes under protected areas—the highest in the country. How much more do you want for the protection?” asks Arvind Kumar, principle chief conservator of forests and principle secretary (environment) of Sikkim. 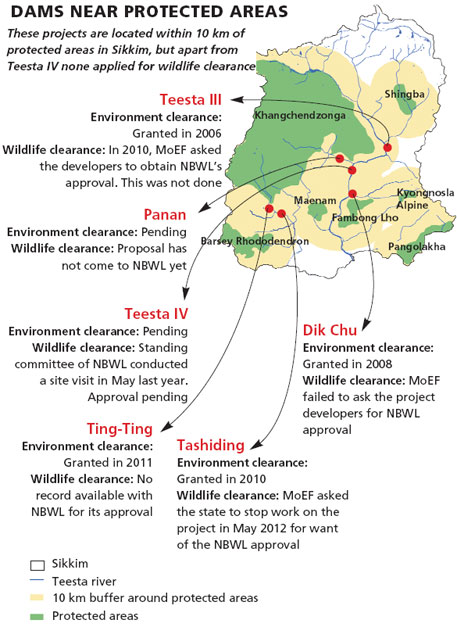 M D Madhusudan, former member of NBWL standing committee and part of the team that visited Teesta-IV dam, wonders about the intent behind ESZ notifications.

“Broadly speaking, there are two ways of drawing ESZs. The first is to use ecological criteria to identify sensitive areas, and draw an ESZ to include such areas. The other way is to be guided more by what one wants excluded. Regrettably, in this case, it looks like the latter approach has won,” he says.

“Twenty-five metres is absurdly small. Isn’t it worrisome that areas within the Khangchendzonga Biosphere Reserve, which the government itself had notified earlier in recognition of its biodiversity and cultural values, do not find a placeÃ”Ã‡ÃªwithinÃ”Ã‡Ãªthe ESZ?” asks Madhusudan.

Down To Earth had reported in November last year how several states were making ESZ proposals to allow industries in ecologically rich areas (see ‘Eco-sensitive zones subverted’, Down To Earth, November 15-30, 2013).

The ESZ around Pulicat lake in Andhra Pradesh was notified in a hurry to make way for a port within 10 km of the lake, a highly placed source in MoEF told Down To Earth. Pulicat Bird Sanctuary, spanning northern Tamil Nadu and southern Andhra Pradesh is the second largest brackish water ecosystem in India. Thousands of migratory waterfowl throng the lake from October to April, including flamingos. Conservation bodies such as Bombay Natural History SocietyÃ”Ã‡Ãªand Salim Ali Centre for Ornithology and Natural History are making efforts to get it declared a wetland of international importance.

The chief wildlife warden (CWW) of Andhra Pradesh had recommended notifying a 10 km area from the boundary of the Pulicat Bird Sanctuary as ESZ in 2007. Down To Earth has a copy of the letter sent by the CWW to the state government to this effect.

While the ESZ notification was still pending, the Union governmentÃ”Ã‡Ãªdecided to set up a major port at Dugarajupatnam near the sanctuary in 2012. Given the possible impactÃ”Ã‡Ãªof the port on the sanctuary, getting wildlife clearance from NBWLÃ”Ã‡Ãªwas seen as a major hurdle. In September last year, the Union Ministry of Shipping notified the port. On March 4, as per media reports, MOEF too finalised the ESZ notification, keeping the proposed port site out.

“There was equal pressure from the state and from within the ministry to keep Dugarajupatnam port site out of the ESZ,” said a source in MoEF.