The Chipko movement halted commercial tree felling in UP's Chamoli district, but the women who led it are still fighting corrupt and indifferent forest officials and fund constraints to maintain the pace of development 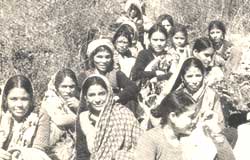 TWENTY years after the women of UP's Chamoli district hugged trees to save them from contractors' axes, the echoes of the call "Chipko" still ring in the district's hills. With new challenges to be met, the women's fight to preserve the Himalayan ecology continues.

The Dasholi Gram Swarajya Mandal, which under Chandi Prasad Bhatt's leadership was in the forefront of the Chipko movement, is today trying to generate ecologically sustainable development through Mahila Mangal Dals (MMDs). The MMDs, involving all the women of a village, undertake a wide variety of activities ranging from forest protection to managing government programmes.

Women have now become sarpanches. Most van panchayats are constituted solely of women who ensure formulation and implementation of village development plans according to their needs and priorities. This has raised the women's status and totally transformed many small, poverty-stricken, deforested, dry villages like Bacher, Tangsa and Heuna around Gopeshwar town.

Before the MMDs started work in these villages, agriculture and animal husbandry existed only in name, forcing the people to migrate to far-flung regions for a living. The women, the worst sufferers of an ecologically degraded "money-order" economy, spent eight to 10 hours every day walking upto 12 km, foraging for fuel and fodder.

The MMDs began by formulating strict forest protection laws and implementing them through fines and social ostracism. Tree felling, free cattle grazing and picking of dry leaves were banned. Guards were employed, with all the households contributing equally to their pay. The women, who earlier had no say in forest management, now regulate its use, including allotment of wood supply to each family for domestic use.

They even took up catchment area treatment and watershed development in the area between the rivers Govindi and Balkahala. Hundreds of quick-growing fruit trees like akhrot (walnut), utis (alder) and some of the citrus variety were planted every year. This provided the villagers additional sources of income.

Today, the fodder available not only meets their requirement, but the villagers earn about Rs 20,000 a year from the sale of the surplus stock. In 1987-88, the MMDs of Tangsa and Siroi villages donated a truckload of fodder free to the drought-hit Tallanagpur village.

Nearly 65 per cent of the households took loans and bought a Jersey cow each. The income from the sale of milk products and calves has enabled them to repay the loans. Introduction of these cows has reduced the number of free-grazing cattle from 300 to 140, aiding the preservation of forests.

Life in Heuna changed after the MMD's formation. Improving agriculture in the village was extremely difficult, so horticulture on agricultural land was taken up. All the families planted various quick-growing fruit trees like malta, lemon and banana. And within a few years the village was self-sufficient in firewood, fodder and timber.

But these successes came after prolonged struggles. The Bacher MMD was presented a bouquet of governmental threats, arrests and cases in 1985-86 when they "chipkoed" 1600 oak trees marked by the forest department for felling. Even today, they have to fight corrupt forest officials, contractors and their men, says Kalavati Devi, president of the Bacher MMD.

For instance, a few years ago, they had to replace the village sarpanch who sold a part of the community forest. A woman was appointed in his place. The villagers also had to prevent stone contractors from felling trees.

While the people preserve the government-protected forest as their own, forest department officials continue to be indifferent towards their conservation. One summer night, in the absence of department officials, the villagers risked their lives to put out a fire in the forest. The officials strolled in only the next day.

Tangsa, 12 km from Gopeshwar, presents a different kind of challenge to the movement. The women have greened all the wasteland, government land and roadsides by planting trees every two years. But the harijans of the village, who own very little agricultural land and cattle and depend on wage labour for a living, often cut the trees.

The villagers of Heuna are faced with a problem whose solution is beyond their reach. Thousands of malta, lemon and oranges rot without any buyers. The Garhwal Vikas Mandal's schemes for buying fruits at remunerative prices have not reached Heuna. As a result, the villagers are forced to go to far-off Pipalkoti to sell oranges at ridiculously low rates. The MMD's limited resources rule out teaching the villagers preservation and marketing techniques and the concerned departments are not bothered.

Similarly, lack of resources prevents the villagers from buying improved breeds of cattle. At the same time, they find no justification in selling the surplus fodder just for half-a-litre of milk as they have to work the whole day to feed their cattle.

A total halt to commercial tree felling was just one of the Chipko movement's objectives. Among other goals was development of home-based industries after the closure of the forest-based industries in Garhwal. But that has not happened yet. The movement is at a crossroad on the way to that goal.