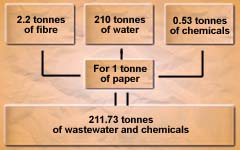 As the name suggests, Mukerian Papers Ltd ( mpl ) has its plant at Mukerian, about 40 km from Pathankot in Punjab. Although mpl has been making profits in the past, its turnover and profitability have declined continuously since 1996-97.

The company does not have a documented environmental policy statement, though the management claims it has adopted an environmental policy in 1976. The company says it believes in implementation and strives to maintain the limits prescribed by the Punjab Pollution Control Board ( ppcb ). But let alone being proactive about improving its environmental performance, mpl has failed even at meeting the effluent standard set by ppcb . It does not have a formal environment department and lacks a policy on renewable raw materials and energy sources, though it is showing positive signs in recycling of wastepaper.There is no provision for environmental auditing by an external agency, though an internal audit is undertaken annually.

mpl 's raw material requirement is met through imported pulp, wastepaper and bagasse, among other things. That mpl relies on agro-residues for raw material gives it some advantage, and its ecological footprint to produce one tonne of paper is a mere 0.024 hectares. On this count, the mill has scored 1.98 out of 2 points. Another point in favour of the company is that it uses rice husk for power generation.

mpl 's fibre-use efficiency is slightly higher than other Indian agro-based paper mills, but is way short of the global standards. The mill's average water consumption per unit has been continuously decreasing. In three years, it came down by 50 per cent. The figure now stands at 210 tonnes per tonne of paper produced. Yet the Indian worst is 200 tonnes, and the mill has not scored any points on this. The figure seems remarkably high. The technically best option is to reduce water consumption to 25 tonnes.

The mill's average per unit consumption of pulping che-micals also tells a similar story. Though the consumption has been declining, it still stands at 266 kg per unit, whereas the Indian average is 100 kg. The company consumes remarkably high amounts of chlorine even by Indian standards. The bleaching process used by the mill is primitive, and relies heavily on chlorine.

ppcb has not granted mpl consent for water discharge since May 1976. The mill was discharging effluents without meeting the standards into the river Beas, which flows about five km away. ppcb had served a closure notice to the mill for this. After receiving the notice, the factory seems to have stopped this practice, though the local community still doubts it. The board had asked mpl to install a chemical recovery system by December 1998. But the mill has been unable to meet this deadline due to lack of funds. Moreover, as on March 1, 1999, mpl is on the Central Pollution Control Board's list of defaul-ters who not having adequate pollution control measures.

Although the mill bought 79 hectares of land for growing eucalyptus trees, its effluent is more than what can be used for irrigating the plantation. The rest is discharged in nearby areas, allege local residents.