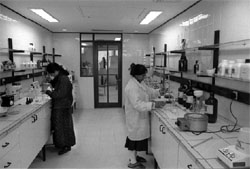 The Centre for Science and Environment (CSE)New Delhihas recently set up a laboratory to monitor pollution. Its aim is to conduct scientific studies and generate public awareness about pesticides and heavy metal contamination of foodwater and soil. It provides scientific services at affordable prices to communities that do not have access to obtain scientific evidence of pollution. This is crucial insaya court case that a rural community might be fighting against a polluter.Given the state of scientific research in India -- most of it is restricted to national defence and food security -- this is an effort to use science to achieve ecological security. The laboratory provides paid services for financially self-sufficiency. The Deutsche Gesellschaft fur Technische Zusammenaabeit (GTZ) Gmbhbased in Bonnand the European Union have provided the funds for setting up the laboratory.


Endosulfan is highly hazardoussays the US Environmental Protection Agency. The pesticide has been in the eye of a storm in developing countries. After the Philippines banned it in 1993the multinational giant Hoechsta manufacturer of the pesticideobtained a court injunction against the Fertiliser and Pesticide Authority of the Philippines. "Several studies and review documents from different sources consistently show that endosulfan is highly poisonous and easily causes death and severe acute and chronic toxicity to various organ systemsincluding mental and developmental toxicityliver and kidney damagecardiac arrestblood disorderrespiratory depressionskin irritationand many others" wrote Romeo F Quijanoassociate professor in the department of pharmacology and toxicology at the College of MedicineManilain the October/December 2000 issue of the International Journal of Occupational and Environmental Health . We present findings of some scientific studies of health effects of endosulfan poisoning.

ACUTE TOXICITY: Endosulfan is highly toxic if ingested orally. Its LD50 value (lethal dose at which half the exposed population dies) is 18-160 parts per million (ppm) in rats7.36ppm in miceand 77 ppm in dogs. It is very toxic when absorbed through skin -- LD50 value among rats (when absorbed through skin) is 78-359 ppm. The a -isomer is considered to be more acutely toxic than the b -isomer. Tests on rats show those deprived of protein are twice as susceptible to its toxicity. Stimulation of the central nervous system is the major characteristic of endosulfan poisoning.

CHRONIC TOXICITY: In ratsoral doses of 10 ppm per day caused high rates of mortality within 15 daysbut doses of 5 ppm per day caused liver enlargement and some other effects over the same period. Administration of this dose over two years in rats caused reduced growth and survivalchanges in kidney structureand changes in blood chemistry . The ability of animals to fight infection can also become lowereda phenomenon called immuno-suppression.

REPRODUCTIVE EFFECTS: Female mice fed 0.1 ppm of the compound every day for 78 weeks at per day suffered damage to their reproductive organs . Oral dosage for 15 days at 10 ppm per day in male rats caused damage to the semeniferous tubules (semen-bearing tubes that comprise testicles) and lowered testes weights. Endosulfan is an organochlorine. Organochlorines are suspected of disrupting the endocrine systemresulting in reproductive and developmental defectsamong other things.

GENOTOXICITY: A substance is genotoxic when it directly affects the functioning of genescausing changes in their functions. Both a -endosulfan and b -endosulfan have been shown to be genotoxic to human liver cells . The b -isomer is a more potent genotoxin.

MUTAGENIC EFFECTS: Mutagenicity refers to the induction of permanent changes in the amount or structure of genetic material of cells or organismswhich can be transmitted to the coming generations . Endosulfan has been shown to be mutagenic to bacterial and yeast cells. Endosulfan has also been shown to cause mutagenic effects in mammals. Evidence suggests that exposure to endosulfan may cause mutagenic effects in humans if exposure is great enough . Changes induced in cells by a mutagen can cause cancerwhile damage to the egg and sperm can cause adverse reproductive and developmental outcomes.

CARCINOGENIC EFFECTS: In a long-term study on mice and ratsthe males of both groups experienced such a high mortality rate that no conclusions could be drawn. The females of both species failed to develop any carcinogenic conditions 78 weeks after being fed diets containing up to about 23 ppm per day. Further testing is required to know if endosulfan is carcinogenic or no.