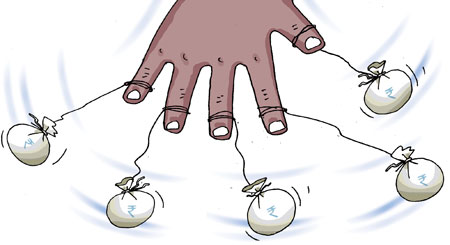 Panchayats and municipal bodies will now have three times more money to spend—at their own will. The 13th Finance Commission has pushed for greater autonomy for local governments by vesting spending power in their hands instead of the state, while increasing their non-plan expenditure from Rs 20,000 crore to Rs 63,000 crore. The money is to be distributed among local bodies in the next five years, which amounts to Rs 12,000 crore per year or Rs 4 lakh per panchayat.

Also known as untied fund, nonplan expenditure is the money local bodies decide where and how to use, and no government scheme is attached to it. The state has no say in the use of these funds. Yet soon after the commission announced its guidelines for distribution of funds in September this year, the panchayati raj ministry sent an advisory to panchayati raj institutions putting conditions on fund utilisation.

The advisory says the funds allocated to local bodies are meant for infrastructure alone, former panchayati raj minister Mani Shankar Aiyar pointed out. In June, while responding to Parliament’s Standing Committee on Rural Development, the ministry had said it “has advised the states to consider using the funds for manpower, office building and other infrastructure for panchayats, information and communication technology, e-panchayat, etc”. Aiyar alleged this amou nts to redefining ‘untied’ to mean that state governments, not panchayats, will be free to spend the money as they wish.

When asked the panchayati raj ministry said it was not aware of such an advisory and would withdraw it if it had been circulated. Chairman of the Finance Commission, Vijay Kelkar, confirmed the advisory had been sent. “It was based on a misunderstanding that the 13th Finance Commission funds were to be allocated untied to the state governments who would distribute them to local bodies,” he said.

Who should control funds?

The 13th Finance Commission was constituted in November 2007 to review and submit its suggestions on the Centre-state fiscal relations during 2010-15. It submitted its report to the President on December 30, 2009. The Centre approved its recommendations but they are yet to be implemented.

While the Commission makes it clear that the grant is non-planned, opinions on limiting state’s role differ. M A Oommen, who has worked on local governments and is chairman of the fourth State Finance Commission of Kerala, said, “The autonomy must be granted to local bodies but to ensure accountability we do need the funds to go through state governments.” George Mathews, director of the Institute of Social Sciences in Delhi, noted that when funds are given to the state governments panchayats get marginalised.

“Instead of the people deciding through gram sabhas what they need, most state governments and departments get to choose what is to be done with the money,” he said. “While the money may be going to the local bodies it is not being used by them.” Agreed Krishan Swarup Gorav puria, member of the Fatehabad Zilla Parishad in Haryana. “This often leads to divergent results because intermediary departme nts do not know what is going on in villages as well as the panchayats do,” he said.

Even the 13th Finance Commission report shows that state intervention is hampering fund utilisation (see Funds not used). As on November 6, 2009, panchayati raj institutions had not drawn 7.42 per cent of the funds they were eligible for under the previous commission, while urban local bodies had not used 10.57 per cent of the eligible allocation.

“The percentage of amounts not drawn remains significant. Such a situation is not desirable,” the report stated. Problems related to devolution of funds do not end with allocation, civil society activists said. Funds are not released till all panchayats in a district submit progress reports. “So a number of panchayats are unable to continue work because other panchayats in their region do not submitted reports,” said Manoj Rai, director of the Society for Participatory Research in Asia that promotes democratic governance.

Mathews pointed out that the audits, where they exist, show funds allocated to local bodies are either released in the last quarter of the year or not at all. “This makes it difficult for local bodies to meet projected targets,” he said, adding that the 13th Finance Commission has made progress on this. The commission specifies that funds should be released within five days of a village panchayat submitting a proposal to the district panchayat.

From ad hoc to performance-based Mathews said by putting a percentage on the untied funds to be distributed among local bodies, the Commission has enabled the sum to increase as and when the divisible pool increases. Divisible pool is the total money, including untied funds, set aside for local government bodies.

The commission has also linked releasing a part of the grant to performance. The allocation will have two components—basic and performancebased. The basic grant will be 1.5 per cent of the divisible pool. The commission recommends the performance grant, effective from 2011-12, will be 0.5 per cent for the first year and rise to 1 per cent in subsequent years. This will create a regular source of funds for panchayats and urban local bodies. The last three commissions made small ad hoc grants to local bodies.

If the commission’s recommendations are followed, India might achieve decentralisation as envisioned in the Constitution, Mathews said.