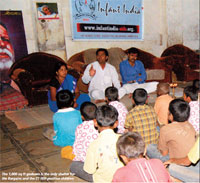 It was a warm evening in Beed. On a reporting assignment to this small town in Maharashtra’s Marathwada region, I decided to go out for a walk. As I passed by a dilapidated godown, strains of children singing wafted down the Imampura road. I could hear snatches of the Hindi prayer song Itni shakti hamain dena data… Curious, I peeped through the shutter and saw over 20 children standing, facing a blinking lamp, and singing. As I watched them, a man in his mid-thirties emerged from the poorly-lit godown. He greeted me and invited me in for dinner. I was tempted by the prospect of having home-cooked food and accepted the invite. I removed my slippers, washed my hands and settled down. My host introduced himself as Dattatrya Shankarrao Bargaje. Introductions over, I was quick to ply him with questions: Who were these children? Why were they all in this godown? Bargaje smiled as he helped me wash my hands after dinner. “There is a common thread linking them—a virus. They are all HIV-positive,” he said. He had adopted these children over the past two years and has been living with them along with his mother Gayabai, wife Sandhya and his three children. They have named the institution Infant India. The 1,000 sq feet hall is divided into a kitchen area and living quarters.Bargaje said he was inspired to work with children living with HIV/AIDS by social activist Baba Amte in 1998. Bargaje then used to stay in Bhamragad in Gadchiroli district. He was working in a government hospital—he is a trained medical lab technician—while wife Sandhya used to teach in the Raje Vishveshwarrao College. “Once we heard about Baba’s Lok Biradari Prakalp community project for the Gond tribals in Hemalkasa, an area surrounded by dense forest near Bhamragad. The centre was just over a kilometre from our house. We decided to visit him,” he said. Baba used to visit Hemalkasa once a month. “We started spending time with him, accompanying him on long walks in the forest. It was during one such walk that Baba sugges - ted we work for HIV-positive children and women.” Baba, recalled Bargaje, said HIV was akin to modern-day untouchability. In 2003, Bargaje was transferred to his hometown Beed. All those years he nurtured the thought of adopting HIV-positive children. “I told Sandhya and my mother about my desire.” Both readily agreed though his sisters opposed. Sandhya quit her job to join Bargaje’s work. In January 2007, an HIV-positive woman approached Bargaje. Her eight-year-old son was also infected with the virus. She asked Bargaje if he would take care of her son after her demise. A month-anda- half later she died; Bargaje brought her son home. Within three months, a second HIV-positive child came to stay with them. “We are in touch with several nonprofits working in the state such as Sathi in Mumbai, Snehalya in Ahmadnagar, Vanchit Vikas in Pune and Gramin Vikas Mandal in Ambajogai, who refer HIV-positive children to us,” said Bargaje. In June that year, the Bargajes registered the project and formally opened the institute for orphan HIVpositive children. But no one in Beed agreed to offer a rented space for the children’s home because of the stigma attached to HIV/AIDS. In 2008, Alijahan Pathan, a businessman, offered his godown on rent. The children moved in, along with Bargaje and his family. “But the contract was for 11 months and we despaired.” Dhundiraj Shastri Patankar, a religious figure in Beed, came to their rescue. “He offered us his godown free of rent. We shifted to this godown in January this year and have since been living here,” said Bargaje. Sandhya and Gayabai, who were listening to our conversation chipped in. “When my husband is away in the hospital, my mother-in-law and I spend time with the children,” said Sandhya. Added Gayabai: “I live in this godown with them because they love me and cannot live without me. I bathe them, wash their clothes and play with them.” But taking care of HIV-positive children who need regular medication and care is not easy. “The time for administering medication is fixed. We make sure not a single dose is missed,” said Sandhya. At present Infant India receives free medicines and antiretroviral therapy from a government medical college at Ambajogai, about 100 km from Beed. Sanjay Jalone, a child specialist in Beed, visits them once a week for checkup; he does not charge any fee. All the 21 children— seven are girls—go to a nearby state government school. “During the admission the teachers had volunteered to contribute for their school fees, uniform and text books,” said Bargaje. The school headmaster bears the rickshaw fares for all the children. “The cost of taking care of a child— children at Infant India are between six and 18 years—comes to about Rs 900 a month, excluding medical expenses,” said Bargaje. In the absence of any government aid, the couple has spent more than Rs 2 lakh from their pocket in the past two years. Their application for grant is pending with the commissioner of the women and child welfare department of Beed for the past six months. While their application is pending consideration, the Bargajes have prepared a list of famous citizens of the district whom they wish on their birthdays and other memorial days. This way they have built up a network of 15-20 people who help the institution from time to time with money or food grain. The MLA of Beed, Sunil Dhande, recently gifted a television, a video player, clothes and vessels. The biggest problem, however, is lack of workers. “No one likes to work with us because of the stigma,” said Sandhya. The Bargajes are undeterred. Infant India is now working on its plans to extend its shelter to destitute HIV-positive women. It was getting dark and I had to return to my hotel. I turned towards the children, now rolling out their mattresses. “I study in class six. When I grow up I want to be a doctor for Infant India,” said a 14-year-old.