Nations finally draft a treaty to combat the use of toxic chemicals like DDT and PCBs, which are known for their damning health effects 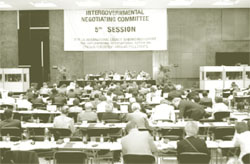 the case for using the 'precautionary principle' to protect human health has received a boost through recent negotiations for a global treaty to control toxic chemicals. Action can now be taken against toxic 'persistent organic pollutants' ( pops) as long as there is scientific evidence that they pose a risk to human health and environment even without complete certainty. Remedial action can begin without waiting for years for conclusive scientific data.

pops, which persist in the environment and travel long distances through ocean and wind currents, have long been associated with serious health effects, ranging from growth retardation in children to genetic defects in living organisms. At a meeting held in Johannesburg, South Africa, from December 4-11, representatives from more than 120 countries finalised a treaty to minimise and ultimately eliminate the use of pops. The treaty is scheduled to be signed in May 2000 in Stockholm, and will come into effect following ratification by 50 countries.

The precautionary principle is included in the objective of the treaty, but is also the guiding principle for including pops in the convention for restricting use, or for elimination. The convention text says that "lack of full scientific certainty shall not prevent the proposal from proceeding". This approach was opposed by the us-led coalition of industrialised countries -- Australia, Canada and Japan -- which called it "unscientific", pushing instead for a science-based approach. But the principle was strongly supported by the European Union (eu). The eu's position was that the precautionary principle must govern the objective and operation of the convention, and should be explicitly integrated in the provisions for adding new substances to the convention.

"This is the first time that the global community has come together and made firm commitments to eliminate chemicals that are directly toxic to humans at a global level," said Clifton Curtis of the World Wide Fund for Nature. "It has very strong language on precaution in the section for adding new pops into the treaty." The us was also pleased with the wording of the text, saying the treaty fulfilled its demand for strict and "rigorous" scientific criteria for evaluating new chemicals. "Not only is it a pretty balanced statement that expresses the precautionary nature of the treaty, but also well integrated into its scientific structure," said Brooks Yeager, head of the us delegation.

Although delegates were haggling up to the last minute, the final agreement was greeted with wide appreciation and support. "The treaty enjoyed the broadest possible support," said John Buccini of Canada, who chaired the negotiations. "People not only felt that we have a treaty, but that we have a good treaty".

Environmental groups had difficulty believing that the treaty had finally got through in the form that it did. "Some of us believed that we might go home empty-handed," said a relieved Karen Perry of the International pops Elimination Network (ipen), an international network of public interest groups. "After negotiating for the last 24 hours, the meeting produced a complete bracket free text, better than many of us dared to hope for, and we are still wondering how it turned out that way." For now, the agreement will target 12 pops, known as the 'dirty dozen' for which a reduction and elimination time frame has been decided. The list includes pesticides such as dichlorodiphenyl trichloroethane (ddt), industrial chemicals like polychlorinated biphenyls (pcbs), and byproducts of industrial processes such as dioxin and furans. A review committee established under the convention will consider additional chemicals to be brought under the convention in the future.

Production and use of nine out of the 12 chemicals will be banned as soon as the treaty comes into effect. Governments were however given till 2025 to find replacements for pcbs present in existing equipment, such as electrical transformers, as long as the equipment does not leak. An estimated 1.5 million tonnes of pcbs have been already produced around the world for commercial reasons, and hundreds of thousands of tonnes of the chemical are said to be in currently in use.


Debates over ddt's elimination have proven to be tricky in the past because of its use as a vector control in many tropical countries. Developing countries like India and South Africa argue that elimination is not feasible, given ddt's important role in combating malaria. The World Health Organisation (who), which has come under criticism from environmental groups for using ddt to fight malaria, maintains that it is the cheapest and most reliable option available. The treaty therefore allows 25 countries to use ddt for vector control in accordance with who guidelines, while the world attempts to find more viable and safer alternatives.

The discussion on the elimination of dioxins and furans was particularly contentious. The eu and Norway supported elimination, while the us called for a more 'realistic and practical' solution. The final decision calls for reducing the release of these byproducts, with the goal of their ultimate elimination where feasible.


The availability of funds to help developing countries get in line with the treaty gave rise to some contentious debates. From the beginning of the pops negotiations, which began over two years ago, developing countries have been adamant that it is impossible for them to bear the enormous costs of meeting the obligations of the treaty. Although accurate figures on the cost to industry are not available, the cost of implementing the treaty's provisions in developing countries is estimated to be between us $100-200 million per year over a period of two decades or more.

The crux of the debate in Johannesburg was whether developing countries would get a separate financial mechanism, as demanded by Brazil, China, India and South Africa, or whether financial assistance would come mainly from the Global Environment Facility (gef), as proposed by industrialised countries. Using gef as the main financial mechanism for the convention would ensure that the industrialised donor countries would retain control over how the money is used.

Finally, the decision on funding was that industrialised countries should provide new and additional financial resources to developing countries to help them meet their obligations under the treaty. gef was assigned to be the temporary financial mechanism, and will be 'strengthened' monetarily to incorporate its pops agenda. Although no amount has been specified, Jim Willis, a chemical expert of the United Nation Environment Programme (unep), estimates that it would be about a us $150 million a year. gef will function as the convention's financial mechanism until the first conference of parties. The conference will decide if gef will remain the convention's financing mechanism, or whether mandatory funding will be provided through a separate funding mechanism. Developing country commitments to the treaty will depend on industrialised countries meeting their financial commitments under the convention. Although the logistics of a mandatory funding system have yet to be worked out, developing countries remain upbeat.

From the very beginning, work on this treaty has been initiated by industrialised countries, particularly Nordic governments who have a high stake in its success. This closure brings with it the hopeful possibility that a new and safer order in the global management of toxic chemicals is about to emerge.