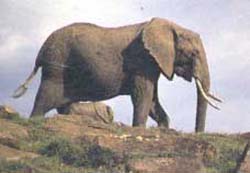 The consensus on allowing restricted trade in ivory was confirmed by a secret ballot, and angeredjhe protectionist groups, which had been trying to 4m- twist nations which were in favour of lifting the ban. The secret ballot also met with considerable opposition. But the issue had become sensitive - with considerable pressure on countries to comply with the viewpoint of the richer nations - necessitating a secret ballot.

Two views were presented by non-governmental organisations (NGOS) at the CITEs battleground. One view is supported by the 'greenies' from the us, UK and Australia, which believe that species can be saved only if there is total protection. The other is represented mostly by groups from developing countries, which believe that every species must pay its way to survive, and that poor countries - which so far have had to bear the cost of conservation - must benefit from the species through sustainable use of their natural resources. While government delegates did the actual voting inside the two committee rooms, local and western NGOS set up camp in the lobby of the venue - the Sheraton in Harare - flooding delegates with literature and free advice to push their point of view. At the centre of the debate was the African elephant, with Zimbabwe, Botswana and Namibia pushing for placing the species in Appendix II, and the 'Green Shield' opposing the proposal.

Zimbabwean President Robert Mugabe set the tone of the debate in his opening address at, the conference. "Every species must pay its way," he said, pointing out that conserving the elephant was costing Zimbabwe heavily. Millions of dollars were being spent in pumping underground water for wildlife and mobilising the army, the police and national park rangers to guard animals against poachers. The annual costs for guarding and for equipment to protect elephants worked out to over $ 400 per sq km. Tlk other view was voiced by well-known paleontologist RichLard Leakey at a reception hosted by the Species Survival Network, a group of protectionist NGOS including the Environmental Investigation Agency (EIA), the Humane Society of the United States (HSUS) and the Royal Society for Prevention of Cruelty to Animals. The statement said it was "a sorry world" in which animals were expected to pay their way. Leakey attacked Mugabe's statement, while claiming that he was proud to be called an 'ellie-hugger'.

Meanwhile, African countries in favour of the ban were threatened by groups from the us. The HSUS is already trying to persuade the us government to withdraw aid from the Communal Areas Management Programme for Indigenous Resources (CAMPFIRE) in Zimbabwe, and there were rumours; that the African states which have opposed the lifting of the ban have been promised additional aid for their stand. The three countries which wanted the ban lifted asked for a secret ballot, so that countries may vote without fear from the 'bullying' nations who use trade sanctions to push their point of view. "We have been told by of sister countries our many that they can vote in our favour only by secret ballot, since they have been threatened that aid to their countries will be cut off if they vote against the ban," said Chen Chimutengwende, Zimbabwean Minister for Environment and Tourism. The threats, he said, have so far come only from Western NGOS. Strangely, the secret ballot was opposed by groups like Greenpeace, who said it was against the convention's commitment to transparency (see box: Who is the bigger bully?). "It is skpr ising that groups from democratic countries are against the secret ballot, When it is the only way of ensuring that countries vote the way they want to," said Chimutengwende. While the 'ellie-huggers' were totally killing of elephants on 'moral grounds', others who were opposed pointed out that neither the exporting coun tries nor importing countries like Japan, adopted in 19 have foolproof methods of checking illegal trade in ivory. Fears were raised that the India joined t lifting of the ban may have repercussions tion is to regu for elephant populations in other coun that effective tries in Africa, as also for the Asian elephant, providing poachers an opportunity communities. for laundering ivory obtained illegally. Those in favour of lifting the ban said this ed by trade. was an excuse for not facing up to the principles of sustainable development and white rhino, rigorous measures for conservation. "We can wait for another 20 years and still the could become other range states will not get themselves ers 2,300 spe organised and start managing their elephant populations properly," said Luckson Masule, a community chief from make subject Botswana. "Why should we suffer for their required in co mismanagement?" The Conf Finally, an amended version of the proposal, drawn up by a working group chaired by Norway, received the necessary two-thirds majority from the 128 countries participating in the convention. The aamendments were considered necessary to ensure control over illegal trade and poaching in other elephant range states with smaller elephant populations.

According to these amend- ments, the three nations will be allowed export of sport hunting trophies for non-commercial purposes, and export of live elephants to appropriate and acceptable destinations for the time being. There will be no trade in ivory products, however, for the next 21 months, after which an experimental quota will be allocated to each country (25.3 tonnes for Botswana, 13.8 tonnes for Namibia, and 20 tonnes for Zimbabwe), subject to approval from the working group.

The will only be countries allowed to trade with Japan, provided that there are effective trade controls in place. The standing committee can halt trade if it feels that there is an escalation in illegal hunting and resumption of illicit trade in elephant products. Meanwhile, other countries with existing stockpiles The Indian delegation to CITEs strongly opposed the listing of the some NGOS - that they sell their ivory to donor countries or agencies. "We are looking for sustainable trade gered Asian elephant big step by finally upholding the principles of sustainable International trade in ivory and poaching development. It gives us hope that we will be able to preserve the our resources for generations to come," he added at clusion ofthe conference.

The African elephant was listed in Appendix I Of CITES as a species threatened with extinction in 1989. But populations of elephant in these countries have grown since then - currently placed at around 150,000. An excess population has led to destruction of the home range of the species, as well as conflict between humans and elephants (see graph: Competing for resources). Moreover, since the ban was introduced, large stockpiles of ivory have built up - some confiscated, some from natural mortality of the elephants - and these countries want to use the funds from sale ofsuch ivory for conservation, anti-poaching activities and rural development. Each of them expects to earn between us $ 4-5 million from the sale of their stockpiles. The tale of ivory trade of ivory will have to register the Hunted down Ivory exports from Africa first peaked amounts at the earliest, to prevent it Poaching of tuskers has reduced in the late 19th century and early 20th from getting into the illegal trade, once elephant population in India century, coinciding with the colonisalegal trade resumes. One amendment tion of Africa by Europeans and -the also states that the money accruing rise of big game hunting. The second from the sale of stockpiles will be managed through a board of trustees, and lasted till the late 1980s, fuelled by including the governments, donors a demand for ivory from markets in and the CITES Secretariat,,set up in each Europe, the us, and East Asia, especially Japan. According to one estimate, money is used to enhance conservation, monitoring, capacity building and about 80 per cent of those in East and community-based programmes. Africa, were eliminated in this period. "This clause questions the integrity of In 1977, CITES placed the African the range states," said the delegation elephant in Appendix ii to regulate from Nigeria. But Botswana, Namibia trade in ivory. In 1985, they put a and Zimbabwe considered this a far SO,,,c,: Vivek Menon, 1997, A God in Distress, Asian quota system to tighten controls. better proposal than the one offered by Elephant Conservation Centre While legal ivory trade came down as a result of these measures, illegal trade continued. Many countries adopted domestic legislation to stop the import of ivory in 1989, the year Kenya publicly burned 13 tonnes of ivory.

Finally, at the 7th cop on CITES in Lausanne, Switzerland, in 1989, the African elephant was placed in Appendix I. But a special compromise was worked out - the Somalia Amendment explicitly noted that not all elephant populations qualified for placement in Appendix I. It established specific criteria for the transfer of stable or increasing populations back to Appendix ii. A special panel of experts was appointed to look into future cases.

At the 8th cop in Kvoto, Japan, in 1992, five countries - Botswana, Malawi, Namibia, Zimbabwe and Zambia - proposed bringing the African elephant back into Appendix II. The panel found that Botswana, South Africa and Zimbabwe ,Wet the criteria for transfer of their elephant populations to Appendix ii. Despite these findings, the proposal was not accepted by a majority of nations. At the 9th CITES meet in Fort Lauderdale, Florida, USA, South Africa placed the proposal once more, this time asking for trade in only non-ivory products from Kruger National Park, consisting mainly of hide. Sudan'also sought one-off disposal of nearly 50 tonnes of ivory, in government custody since 1988. But the proposals did not have the support of the majority of the African range states and were withdrawn.

The illegal trade in ivory and the increase in poaching has been central to the debate on the proposals of the southern African countries. India has supported a complete ban on trade in ivory, since there has been a greater international demand for Indian ivory than for African. In legalising international trade in ivory, illegal trade - dependent on poaching - is also likely to be set off, affecting the Asian species. With a much smaller population and a low male-female ratio, the Asian elephant is the more vulnerable of the two species (see box: The endangered Asian elephant). Scientific methods being developed for distinguishing between legally and illegally acquired ivory are not foolproof, and are expensive.