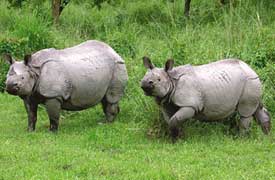 A few decades back, the declining rhino population of Assam was a major conservation problem. But after the 2006 rhino census, the tables have turned. Assam's rhino population has gone up substantially. In Pobitora wildlife sanctuary, for example, there are now 81 animals -- a ten per cent increase over the last six years. But the success in conservation has only increased the worries of this park's managers. The 37.7 sq km sanctuary is today overcrowded with rhinos.

Pobitora was declared a reserve forest in 1971 and a wildlife sanctuary ten years later. Its humid grasslands interspersed with woodlands and wetlands make Pobitora the perfect habitat for the one-horned rhino (Rhinoceros unicornis). But the park's growing rhino population has exposed a serious limitation: experts say that an ideal rhino habitat should have a pair of rhinos per 2 sq km and 81 rhinos are a bit too much for the 37.7 sq km protected area.

A mere 16 sq km of the park's 37.7 sq km is actually good rhino habitat. The remaining area is jagged with hillocks. "Pobitora has exceeded its rhino-bearing capacity and is overpopulated. The animals have begun moving outside the sanctuary in search of food, and chances of serious man-animal conflict are quite rife," says Assam's chief conservator of forests (wildlife) Mohan Chandra Malakar. Besides, the straying animals run the risk of contracting diseases that afflict domestic animals.

The sanctuary is surrounded by villages on all sides and so there is little scope of expanding the protected area, other officials say. They fear that the animals are more vulnerable to poachers than ever before.

Experts also note that overpopulation is sure to lead to fierce competition among the animals for food, space, shelter and mates. "The birth rate of rhinos is, in fact, declining. This is very likely a result of overpopulation," remarks Malakar. "But more research is needed to substantiate this hypothesis," he hastens to add.

"Under the circumstances, translocation seems to be the only way to protect Pobitora's rhino population," says Malakar. Some of the animals will be shifted to other sanctuaries in Assam: Manas, Laokhowa, Dibrusaikhowa and Orang. Malakar feels that this will bring down the intense competition among the rhinos.

The programme is supported by the wwf, the International Rhino Foundation, Save the Rhinos Campaign of Zoological Institution Worldwide and a few local ngos. It's part of the ambitious Indian Rhino Vision (irv) programme, which aims to have 3,000 rhinos in Assam by 2020. The plan takes into cognisance Pobitora's shaky situation and states that its priorities include "reducing the population in Pobitora so that it is within the ecological and sociological carrying capacity of the reserve."

N Mahanta, a wildlife official of Assam who has been involved in the translocation of rhinos in Nepal, says the new habitats will have all the essentials to sustain a rhino population. He says that the officials have taken all steps to prevent complexities. Translocation is expected to start in February 2007. Assam's forestry and wildlife minister, Rockybul Hussain says that a request for funds has been submitted to the central government. "All the possibilities regarding developing the sanctuary and exploiting its potential up to its fullest are being studied and work will start in right earnest soon," the minister said.

Only time will tell if irv revives Pobitora's sagging fortunes. But the fact remains that the park has been vastly neglected. Floods are a routine problem. In 1998 and 2002, the sanctuary was totally submerged and several animals, including rhinos, were washed away. The wildlife department has created several highlands within the park where rhinos can take shelter in times of floods, but these are rarely effective. Besides, excessive use of insecticides and pesticides in agricultural plots adjacent to the sanctuary has affected the grassland's quality. Grazing of livestock inside the sanctuary is another persistent irritant.

Surya Narayan, Assam's conservator of forest (wildlife), says lot of the problems stem from a paucity of funds and human resources. "We are not neglecting the sanctuary by any means. We can only put forward our requests for funds to higher authorities. There is precious little one can do, if they don't respond favourably."

Narayan has a point. Paucity of resources is a pretty serious problem. For example, the forest department has set up 22 camps to monitor the park but it has only 8 wireless sets. Forest guards told this reporter that the shortfall created major difficulties particularly during the monsoons.

But in spite of these difficulties, the forest department has done a fair job. The mortality rate of rhinos has come down, though not satisfactorily: in the last ten years there were 19 natural deaths compared to 26 such deaths in the preceding decade. Poaching has been checked to an extent and that is believed to be the key reason behind the increase in Pobitora's rhino population. In the last ten years poaching has come down by almost 50 per cent, with only 15 rhinos being killed by poachers.

The sanctuary's officials feel that mortality rate and poaching will go down further, if they are provided better equipments and facilities. The irv 2020 programme now holds all their attention and forest officials are eagerly awaiting the intra-state translocation of rhinos in Assam.