A quarter of a century ago, a jeep driver decided it was time to make a change. Ralegan Siddhi, made into a model village by Anna Hazare, faces challenges of a different kind today 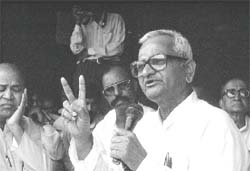 One small village in Maharashtra is the teaching ground for five state governments today. Anna Saheb Hazare is the benevolent teacher. He teaches common sense. Rules of simple and sustainable living that the nation has learned to forget. Practices that have made Ralegan Siddhi an example for the numerous developmental activities throughout the country.

Flashback to 1975. The village is caught in a web of abject poverty and illicit liquor trade. The per capita income is unbelievably low at Rs 271.

Enter Hazare, who has retired as a driver from the army. He decides to settle in the village. Under his guidance, people transform the village.

Today, agriculture flourishes in Ralegan. Water is abundant. Greenery has clothed the barren landscape and there are no liquor dens. Ralegan Siddhi is much more than a village. It is a model. The Madhya Pradesh chief minister, Digvijay Singh, made a week long visit to the village just before starting a state-wide watershed development programme. Hazare is a member of the state's planning committee for the watershed development programme. Andhra Pradeh chief minister, Chandra Babu Naidu, has instructed his officials to visit Ralegan. Hazare visits the state every month to interact with villagers and state officials. "The magic of Ralegan lies in Anna's simplicity," says D K Mukherjee, chief principal conservator of forests, Andhra Pradesh. Other states learning and imbibing the essence of Ralegan's success are Gujarat, Rajasthan and Uttar Pradesh.

Thousands of people pour into the village annually. Individuals and non-governmental organisations get inspired by the people of Ralegan to replicate the success in their own areas. Hazare's ideas have taken root.

Why do so many states wish to emulate a village's experiment in sustainable living?
The arduous climb of the village out of its dismal past is well reflected in the dramatic figures. The per capita income of the village shot up from Rs 271 in 1975 to Rs 2,257 in 1985. Today, more than 40 per cent of the households have an annual income of more than Rs 48,000. An envious figure for any village in India. More than one fourth of the households have an annual income above Rs four lacs per annum. Bitthal Baba Pathare, a resident, says "While my father used to earn Rs 25,000 from agriculture, I am earning Rs 75,000 from the same field." Earlier out of his 5 hectares of land only 2 hectares could be cultivated during monsoon. "Our village has many private wells now and consequently an increased cash crop yield," he says.

Plantation of trees like guava, custard apple, mango and tamarind on private lands has earned villagers incomes as high as Rs 14,000 per hectare. The Sarpanch (head of the village council) of Ralegan narrates, "There is a surplus of fuelwood and fodder. We now help neighbouring villages in their time of need."

Almost all residents grow seasonal vegetables apart from the large-scale cultivation of onion. The cropping intensity is now 180-190 per cent higher than 25 years ago. In one year the land is in use for 10 months. The statistics match that of Punjab.

Women's participation through self-help groups has been crucial to the social structure of the village. These groups mobilise marginal savings and use the money to generate of business opportunities for themselves. Now there are 11 such groups with 200 members and a savings of more than Rs one lakh. The bank in the village provides a loan equal to one-fourth of their savings for taking up self-reliance activities like enterprenurship development programmes. "These groups contribute a lot towards enhancing the status of women in the village", says Ratna Ganapati, manger of the Ralegan branch of Bank of Maharashtra. "With the increase in village wealth, women have been able to use their time more productively," reaffirms Shantibai Namdev Mapani, who has started a tailoring unit in the village.

Ralegan boasts of a 100 graduates and 250 people pursuing jobs outside the village, with an average income of Rs 2500-3000 a month. Above 60 per cent of the households have motorcycles, there are 67 jeeps and 12 autorickshaws in the village.


It has taken 25 years of hard work and Hazare's vision to reach here. To begin with, he donated Rs 3,000 to renovate a local temple. In the same temple, he baptised the villagers with his five commandments, namely: prohibition, family planning, ban on open grazing, ban on felling of trees and voluntary labour. The last commandment meant more than it seemed initially. It meant minimum dependence on the government for doles. "It socialised the costs of projects." explains Hazare. Even those who were working outside the villages contributed to the development by committing a month's salary every year.

Work began with the government constructed percolation tank in the village. In 1975, the tank would not hold water. The embankment wall leaked. Hazare rallied people to voluntarily repair the embankment. The repaired tank made the seven wells below it to swell with an abundance of water.

For the first time, in the living memory of the people, the wells had water in summer. People realised Hazare had something worthwhile to share with them. The village never looked back.

The social leader made clear that the youth had to be at the forefront of all social and development work. The Tarun mandal (youth group) was formed. The group worked to ban the dowry system, caste discrimination and untouchability. Liquor distilling units were removed and prohibition imposed.

Open grazing was completely banned with a new emphasis on stall-feeding. Cultivation of water-intensive crops like sugarcane was banned. Crops such as pulses, oilseeds and certain cash crops with low water requirements were grown.

At the same time, Ralegan Siddhi became a unique case of consensual politics. All elections to local bodies began being held with consensus. "It made the community leaders complete representatives of the people," says Ganpati Rai Aavti, head of Ralegan's village council. A system of Nyay Panchayat (informal courts) was set up. Since then, no case has ever been referred to the police.

The Rs 22 lac school building was constructed using only the resources of the village. As a principle, the village refused to take any donations. Money, if needed, was borrowed and duly repaid. The success of the village is, thus, built as much upon the people's pride as their effort.

A new system of sharing labour grew out of this infusion of pride and voluntary spirit. People volunteer to work on each other's land. "This is the ultimate symbol of prosperity. As a result, a more intimate community life has developed," says Ashok Tarunkar, a resident. Landless labourers also gained employment. Today the village plans to buy land for them in adjoining villages.


Another generation, meanwhile, has grown up, in the 25 years, with its own set of expectations and aspirations, wishing and demanding more. "Like cities our village doesn't have buses and roads," laments Manisha, a 12 year old school girl. She has not seen the Ralegan that her father saw. She was born when the school building was already under construction and the village had already become famous.

In villages across India, migration of labour is a result of poverty and lack of employment opportunities back home. In Ralegan, albeit, prosperity is the cause of working women and men migrating to urban centres. The people are educated and qualified. Many doors of opportunities are open for them in cities.

Arun Pathare, a village elder, observes in Manisha the dilemma of Ralegan's future, "The future is difficult to predict as prosperity has come to the village. The new generation has a different approach to life. I can't say whether they would stay in the village to look after its welfare. Another Anna might not happen to Ralegan."

"With easy access to education, the concept of living has changed," says Anna Hazare (see interview: Changing times). "Ralegan will see more and more of its people going outside for better jobs."

Such facts set Hazare thinking. "Ralegan's social character has changed beyond recognition. Agriculture, despite being very productive, may not be the first choice of people anymore.I cannot say how the future generation will treat the village and its legacy."

Santosh, a guide at the village, echoes his worries. "The regular stream of visitors has exposed Ralegan to the modern world. With ample money in hand, villagers are adopting a lifestyle that does not suit us. Soon we might have all those modern accessories of life, but will we forget our past?"

The high agricultural productivity has come at a cost. Overuse of fertilisers and pesticides. Ashish Kothari, a Pune-based natural resource expert, says, "The overuse of pesticides should be controlled." An attempt to shift to organic farming is underway.

The succinct answer to the question of the village's future without Anna lies in Anna's own words. "The process of Ralegan's evolution to an ideal village will not stop, with changing times people tend to evolve in new ways. In future Ralegan might present a different model to the country."