Solutions do not come easy. However, there are ways to avoid a bigger crisis: give water back to the people and rediscover the water harvesting traditions 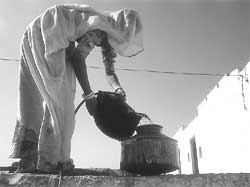 FOR THE PEOPLE , BY THE PEOPLE
So far, the planners have done their best to leave communities out while conceiving projects. It has not worked, India needs to give water back to its people, the planners need to involve the masses.

Almost all the countries that face a water crisis today can trace the roots of this to the discontinuity in their water management strategy since the 19th century. In most cases, the State has emerged as the water provider, replacing communities and households as the primary agents.

After innumerable faulty projects, the government agencies have now realised that if they want the water programmes to succeed, things have to change. More crucially, community participation is one of the most important elements India's policymakers need to address. "There is need for a supply-driven approach rather than a demand-driven approach," Hashim explains.

Community participation in most of the water supply schemes is zero. "The state supply agencies are merely engineering bodies and they do not understand the social issues involved, or the needs of the people," says Norden. Even an expert committee report of the ministry of rural areas and employment commented on the lack of people's participation: "The community was not made aware of its entitlements -- that is the right to know the details of the scheme and the funds being utilised, the right to be made aware of the technical aspects and the right to know its new obligations."

After a project is sanctioned, the work is usually handed over to contractors. Social issues and community participation figure at the bottom end of the contractors' priorities. "The people give up their own efforts, when they see the government doing all the work and is not bothered about what the masses feel, think or want," agrees Hashim. However, not all projects ignore vox populi . That the clue to all such programmes lies in community participation has been aptly highlighted by the success of the water missions in Madhya Pradesh ( see Down To Earth, Vol 7, No 15). The masses need to be involved for the rest of India's villages and towns to follow the examples set by Alwar (see box: Partners in progress ) and Jhabua: if you give water back to the people, more will flow. REVIVING TRADITIONS
India must learn to value the raindrop. It must catch rain where it falls. These are some of lessons the traditional modes of harvesting water taught us

Water harvesting as a strategy for meeting human needs in management essentially means re-establishing the relationships between the people and their environment and turning water into what is -- an element of nature to be used judicially. It also means empowering urban and rural communities so that they begin managing their own affairs.

Today, what India needs is a revitalisation of all its ancient traditions of conserving and harvesting water. These traditions are now languishing for every little attention they can possibly get. India receives most of its rain in about 100 hours. For the rest 8,660 hours of the year, there is hardly any water. The people who practised water harvesting in the ancient times and their modern counterparts -- all knew if they did not catch rain as it fell, there would be nothing later. Not all the traditions are dead, though. The people of Rajasthan developed the art of making kundis, a water harvesting system, that goes on to this day. All it requires is a sloped patch of land with its slope directed towards the centre. The people place either cement or limestone on this artificial catchment to increase the run-off and gather it in the central depression. Ladakh, Rajasthan's polar opposite, also faced intermittent water shortages. So they learnt to capture the evening glacier run-off and use it later.

There are many such examples. Himachal Pradesh ( hp ) a hill state in India's north, receives some 1,134mm of annual rainfall. Still, most of the state's 59 urban settlements face a water shortage. For instance, the average water supply available in Shimla is 101.79 lpcd, much less than the 150 lpcd suggested by the state's planners. Water supply method here mostly involve lift schemes, as most of the residences are on the hill top and the water is collected downhill. The answer: "Catch water at the top of the hill," says R K Sood, joint member secretary at the State Council for Science and Technology.

Buried beneath the houses and gardens of Jakhu hill, Shimla's highest point, are many snow pits that people once collected and stored water for the summer months. But today, hotels dot the hill slopes. These inevitably dry up during the summer, as tourists throng the cool hill station.

But if state chief minister Prem Kumar Dhumal has his way, the scenario will soon change again. The state cabinet has decided to make rainwater harvesting mandatory for all new constructions. hp becomes the first state to do so, close on the heels of the Madras metro board. "The cabinet has approved it. Only the modalities have to be worked out now," says Rajwant Sandhu, secretary in charge of forest, rural development and science and technology. India is lucky enough to have a huge quantity of water, theoretically as much as 173 mham, which is lost as evaporation or as soil moisture every year. This water can be easily captured directly as rainwater or as run-off from catchments. Capturing floodwaters of a river can further boost water availability. If even 20-30 mham can be captured, a tremendous load will be taken off India's ground and surface water sources.