Four-hour deluge washed away not just crops but also soil from 5,000 hectares in Maharashtra. Experts warn of more such weather events. Is the government ready for the challenge? 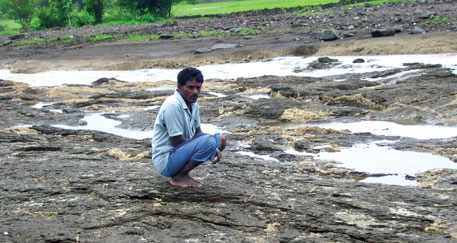 Suresh Ingle was the owner of a twoand- a-half hectare (ha) orange orchard till the night of June 14. The next morning, a swift stream had materialised on his land, taking away half of the 300 trees and causing a well to collapse. Rest of the trees were either covered with debris or had the earth swept away from around the roots. That morning, his neighbour Subhash Raut found smooth rock where his half ha farm used to be. “About two metres of soil has been washed away,” says Raut. “I cannot grow anything on this land ever again. It is a disaster that no relief or help can rectify.”

Ingle and Raut are victims of an unprecedented tragedy that struck Mangrulpir and Manora tehsils of Maharashtra’s Washim district on the intervening night of June 14-15. A record 374 mm of rain poured over the region within a span of four hours. The resulting floods washed away one to two metres of soil of some 4,900 ha of agricultural land along the numerous streams and rivers and rendered most of the land unfit for cultivation for years, probably decades.

While the district administration blames the disaster on a freak weather event, farmer-activists, climatologists and soil scientists say several forces, right from degrading soil health to encroachment and changing crop patterns, were at work. But the question before farmers is that with the frequency of intense weather events rising, will such disasters also become frequent in future? If yes, then how can one protect the precious soil from being washed away or make the eroded land fit for cultivation?

Irreparable loss
The Washim district administration has classified the affected land into “reparable” and “irreparable” categories and has placed 135 ha in the “irreparable” category. The state government declared a compensation of Rs.25,000 per acre (0.4 ha). But there is no information on the criteria the administration used to make such categorisation or what kind of repairs it intends to carry out. Farmers feel their land is lost for good. “I am now left with only murram on my land,” says farmer G L Kalapar from Chinchala village. “Officials are talking of spreading silt from dams on the eroded land, but that will take at least 10 years to stabilise.”

Besides, it is an expensive measure, says Pravin Ghodchar from Warud village. His 2.8 ha field developed wide, three feet-deep gullies after the downpour. “It will cost me Rs.15 lakh per ha to replace the lost soil,” Ghodchar adds.

Vilas Kharche, professor of soil science at Punjabrao Deshmukh Krishi Vidyapeeth (PDKV) in neighbouring Akola district, agrees. “Soil takes thousands of years to regenerate. Even if silt is laid on the land, I doubt if it will work at all. The loss cannot be made up.”

Farmers who still have some soil left on their land are levelling it and planting crops in a desperate bid to get some income. Ghodchar, who has planted soybean on his land, says, “My crop looks like a joke. The fertile topsoil is gone, but I cannot afford to lose a crop.”

Climate change the culprit?
Both scientists and farmers say rainfall pattern in the region is getting more erratic by the year. “This year, our region saw Mruga nakshatra rains after 19 years,” says Gajanan Amdabadkar, farmer and Shetkari Sanghatana activist from a nearby town, Karanja Lad. The nakshatra (lunar day) heralds a good monsoon season. “People were happy. But the rains turned surprisingly heavy. We have never seen such heavy Mruga rains before,” he adds.

Subhash Taley, who heads the Department of Soil and Water Conservation at PDKV, says, the monsoon began in early June with light showers. By the time heavy rainstorms came in July, the land had adequate vegetation cover to hold the soil. But in the last decade or so, the season is beginning in July and with heavy rains, thus eroding the bare soil. While the number of rainy days in this semi-arid region has dropped from 50-55 per year some 30 years ago to 35-40, the rainfall is growing intense, causing severe erosion, says Taley. “Five thousand hectares getting completely eroded in one night is quite dramatic. I wonder if this phenomenon might repeat itself in future.”

There is a strong probability that frequency of such incidents will increase in future, says Ramchandra Sable, climatologist at Mahatma Phule Krushi Vidyapith in Aurangabad. Similar incidents were reported from across the state in the heavy rainfall years of 2005, 2006 and 2007. Farmers can expect rainfall of such intensity once or twice a decade, he warns.

But torrential rain is not the only cause of such large-scale erosion.

Soil health, land use pattern blamed
The change in climatic conditions is also impacting soil health in the region.

According to Kharche, organic carbon content in the region’s soils has reduced from a healthy 1 to 1.2 per cent to 0.40.6 per cent in the past few decades. Changing crop patterns have not helped, says Kharche. “Erosion-resisting and carbon enhancing crops like moong and urad have virtually disappeared from the region in less than a decade, and tur is on its last leg. Farmers hardly grow jowar, the main source of fodder and a farm yard manure.”

Farmers blame the erosion on heavily silted and encroached nullahs, which aggravate flooding. Farmer Virendra Singh Thakur from Mangrulpir village, says, “Our village is rapidly developing into a town, and nullahs are being recklessly encroached.” He alleges that a builder has encroached half the bed of a nullha flowing next to his farm. “Flooding in the nullah not only eroded my two acres of land, but also filled up my well.”

Riverine ecology expert Nilesh Heda, from non-profit Samvardhan in Karanja Lad, says land use pattern in the region has undergone a sea-change in the past three decades. The two tehsils had extensive grasslands which have been destroyed by encroachment.

The number of rainy days in the semi-arid Vidarbha region has reduced, while rainfall is becoming intense

As if this were not enough, the government has proposed a spate of irrigation projects in the region despite opposition.

Nine projects are planned in Manora tehsil alone. “Merely deepening the tanks and nullahs would have solved both the flooding and irrigation problems,” says Amdabadkar. Heda says villages like Wapti Kupti and Bhivri, where his non-profit Samvardhan de-silted nullahs and deepened tanks, escaped the floods on June 14-15 despite the deluge. Collector Ramchandra Kulkarni agrees that de-siltation work has been neglected in the district. “All proposals are stuck in cost revisions,” he admits.

In July, while announcing the flood relief package for the Vidarbha region, which includes Washim district, Chief Minister Prithviraj Chavan has provided for dredgers to desilt and deepen nullahs, and ordered district administrations to prioritise clearing of nullahs and rivers.

But this may not be sufficient without ecosystem restoration. “Proper compartment and contour bunding of farms, along with restoration of bund vegetation like grass and trees for soil conservation is a must,” says Taley.

“Traditional crop patterns and grasslands must be restored to improve cattle numbers and soil health.” Sable says given the increasing frequency of intense rainfall, the government should also set up early warning systems. Automatic weather stations can warn farmers as soon as air pressure drops prior to heavy rainfall. Farmers can then breach their farm bunds in strategic places to let out water and minimise damage, adds the climatologist.