In theory, rainwater harvesting can drought-proof every village in India. In theory, drought-proofing requires strong and functioning village-level institutions. Travelling through Chattisgarh state officially declared drought-hit -- gives me a chance to see if theory and reality intersect 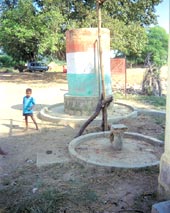 In theory, rainwater harvesting can drought-proof every village in India. In theory, drought-proofing requires strong and functioning village-level institutions. Travelling through Chattisgarh state -- officially declared drought-hit -- gives me a chance to see if theory and reality intersect.

Part of India's rice bowl, Chattisgarh's villages used to run on water collected in tanks. These tanks are visible even today. In some villages, they are looked after. In others, they are just bits of masonry fallen apart. In all, the picture looks bleak: the tank system is barely alive. Could their maintenance have saved Chattisgarh from the drought? I cannot answer this question, I can only ask it.

The villages I pass through also have government-run water management programmes. I must take note of them, I tell myself. What role do these programmes play at the village level? How do they unfold? Like drought, these programmes are officially declared, it occurs to me. Of course, in the case of Chattisgarh, there is the complication of having inherited such programmes from the time the state was a part of Madhya Pradesh. How has the transition affected the way water is being officially managed?

Take the case of village Thakur Diya Kala, in Chattisgarh's Mahasamund district. It has 2 ancient tanks the 1000-odd villagers use for nistar (domestic uses, bathing and washing). The village practices rainfed agriculture but this year the rains failed. The village's survival capacities also plunged. I was told of people leaving to look for work as labourers on the highway, or leaving for the railway station and thence to cities. But not everybody could leave; certainly not women and children.

When I reached the village, it was battling a dilemna. 70 per cent of its crops had already been destroyed; now, the December crops were in a critical condition. Villagers gathered to debate the question: could the nistar tankwater be diverted to the fields? Said a stressed Tarak Ram Patel: "We can save the crops but then we will have to go without baths and the cattle will not have water for drinking". Perhaps 1 tank could be breached, some of the crop could be saved.

How did such a situation arise when water management programmes such as the Rajiv Gandhi Mission for Watershed Development (rgmwd) and the Indira Gaon Ganga (igg) -- the former initiated by the Madhya Pradesh government and the latter initiated by the Ajit Jogi government in 2002 -- are present in the village? "We were promised facilities for water by the government, but that never arrived," says Patel. The 3 rgmwd percolation tanks are silted and checkdams are crumbling; the borewell installed under the igg pumped water into the ancient tanks, but it has been defunct for 2 months and the tanks are almost dry.

Villagers complain that the rgmwd village committee has collapsed. "All the money of the committee has been misused," alleges Jawahar Singh, the previous sarpanch. "We need money to deepen the rgmwd tank, and it will solve our irrigation problems, but no one knows where the mission money has gone," informs Patel. Villagers also feel neglected: the present sarpanch is not from Thakur Diya Kala; the panchayat is useless, they say.

At present the panchayat the village falls under covers 8 blocks. Villagers want smaller panchayats, that can solve local problems. They feel drought can be avoided if the mission is revived. As I leave, they are yet to decide how the little water the tanks contain are to be used. As Singh puts it, "In two days we have to decide, or we cannot save the remaining crops."
The 500-strong hamlet of Maupad, dwarfed by the huge steel plant at Bhilai in district Durg, also has a non-functioning panchayat. The rgmwd committee here is alive and committed, but hanging in the balance. "We are not sure what is happening," says a pensive Sita Ram Patel. "We hear mission officials are planning to hand over the responsibility of the tanks to the panchayat."

The villagers are quite clear that the percolation tank the rgmwd built is a great benefit. A new tank lies half-finished; the mission could not provide funds. Till matters are sorted out, it will remain so. "Due to watershed activities, we have not faced crop failure during this drought," says Patel. A borewell sunk by the igg also helped to mitigate drinking water crisis. But what will happen if the next monsoon fails? This is the question that Maupad does not wish to think of, far less answer.


The last village on my itinerary is Bhimcha, in Belsunda block of Mahasamund district. Its 5,000 strong population is a happy crowd. That's because the village teems with water: its 17 tanks, built a long time ago but maintained perfectly even today, are full.

The village uses 4 of these tanks for domestic purposes. Another 7 are leased out to fisherfolk by the panchayat; the former have been given clear instructions to maintain the tanks. The rest feed the vast tracts of paddy land that surround the village. "The secret behind our village surviving 2 consecutive droughts is our dedication towards looking after the ancestral tanks," says Jaylal Bhoi, village ex-sarpanch.

Every year, 2 or 3 tanks are desilted through voluntary labour. The villagers do not depend on any external funding anyway; the panchayat uses to the full the money allocated to it. The effects of such planned activity are there for all to see: like other years, in 2002 the village managed to take 2 crops of paddy.

As in other villages, the igg has made its presence felt, borewell and all. But for the villagers, it is like an added bonus. " igg helped us because we have less crowd in the village taps to collect water," says Radhabhai Chandrakar, the current sarpanch. Water levels in the bore well remain high, thanks to the percolation into the ground from tanks.


Bhimcha survives because of the presence of a strong local government. The awareness level among villagers about the need to keep its water resources intact is very high. Village-level institutions work in comfortable tandem with their local electorate, because the officials are as convinced about water harvesting and watershed development as the people. In this way, it has managed to break through the drought trap.

It is ironical that Chattisgarh suffers from drought, and has high rates of out-migration. A network of 45,000 rainfed tanks dot the state; there is one in every village. But 60 per cent of these lie neglected. Is this wastefulness the reason the state is becoming a parched land? Clearly, something in wrong in the water management plans and priorities this newly-formed state has set itself. Instead of taking precautions, Chattisgarh is hurling itself in the direction of groundwater overuse: whereas it now has constitutional mandate to plan its future and could take up rainwater harvesting, it takes up solutions such as the igg, a short-term and reactive one.

Would it be too much to imagine that Bhimcha can be replicated state-wise? Among other things, to allow travellers like me to come away with hope? I have the right to dream; can it not become reality?