The healthy city project is, if nothing else, a pointer to the direction that Indian cities need to move in 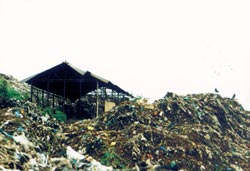 When asked about the 'healthy city programme' (hcp) in Kottayam, a municipality health department employee looked surprised: "Does it still exist?" But Joshi T Jose, coordinator of hcp, asserts that it does. hcp was conceptualised by the World Health Organization (who) in furtherance of the belief that social, environmental and economic factors play a larger role in 'health' than medical care and technology. The Kottayam project was modelled on a similar initiative in Toronto, Canada.

hcp aims to improve health and environment conditions through awareness generation, community participation and partnerships with local and municipal agencies. Jose says hcp was launched in Kottayam after it had been tried, and failed, in bigger cities. While Jose attributes this failure to lack of enthusiasm and group work, A K Sengupta, national professional officer, who, disagrees, "Those projects are still being implemented. They take time to trickle down. Earlier hcp was tried in small pockets, for instance in a slum in Mumbai, then the need to spread it across a whole city was felt. Thus, Kottayam was selected for the project."

The Kottayam project was launched under the initiative of the department of public health, Mahatma Gandhi University. The Kottayam municipal council adopted a resolution in January 1998, and a steering committee headed by municipal council chairperson Sunny Kalloor was formed. The project is structured on a decentralised plan of action. It is, thus, broken up into various settings, such as healthy home, healthy neighbourhood, healthy village and so on, leading up to the healthy city, and ultimately, a healthy district.

To attain the status of a healthy city, Kottayam has to measure well on several environmental, health and socio-economic indicators. "Given the high standard of living in Kerala, the state has already achieved almost 80 per cent of the required indicators. If the project continues at a reasonable pace, Kottayam can achieve its goal within five years," says Jose.

The Kottayam project is funded by the municipal council and Nirmal 2000, a programme involved with the sanitation of the city. Financial aid in the form of grants up to Rs 10 lakh can be obtained from the who country budget. Small amounts also come from interested industries and agencies. Some of the projects were completed with the cooperation of the People's Planning Programme (ppp), and was financed by it. For bigger projects, the council requires who recommendation to the World Bank or other international bodies for monetary help. So far, almostRs 40 lakh has been spent on the project.

With no deadlines to conform to, the project is moving at its own pace. One area of concern is taken up at a time, and dealt with. The period from August 1998 to May 2001 was an active one. But since then, practically no work has been done on the project. There have been projects on healthy schools and work places, and upgradation of health services. The latter involved setting up health assemblies in 32 wards of Kottayam municipality. A waste management survey was conducted in K K Street, conceptualised as a 'healthy street'. Yet another example: 200 latrines were built in areas with inadequate sanitation facilities. In another infrastructure-intensive programme, the 'tap for a home' programme, 120 taps were installed. Work on the 'healthy village' concept is proceeding at Eerattupeta, with the building of bridges and toilets. "At present, the committee has sent a proposal for a new project on solid waste management, and is awaiting approval," says Sunny.

But inertia has set in. "The project should involve the community as a whole. Only a handful of people display genuine interest; even the municipal council lapses into inaction," says Jose. Sengupta has a point to make too: "The role of state governments and local bodies is important. When who and other agencies move out, the state government needs to keep the project running. The project aims at a healthy lifestyle, and therefore, has no time-bound agenda." But perhaps a deadline is just what the project needs to achieve its target.