Rising from the ashes

Rising from the ashes 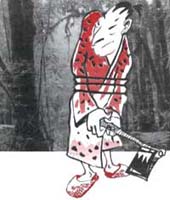 WOOD forms an integral part of the economies of both India and Japan, but in spite of their sizable forest areas, both continue to be wood-deficit countries. While the pressure in Japan mainly comes from the demand for industrial wood (the country's burgeoning paper and pulp industry is a major consumer of forest products), fuel-wood continues to account for the main demand in India.

However, Japan holds an advantage over India in this issue. Today, reportedly 66.6 per cent of Japan's total land area is under forests and other wooded lands, as against only 23 per cent in India. Japan has followed a tradition of afforestation which India can learn from: Japanese farmers have played an important role in raising plantations by participating in state- sponsored afforestation programmes on private lands. India has huge expanses of degraded private lands. By afforesting these lands with multi-use tree species (with the involvement of farmers through state-sponsored innovative programmes of subsidies and loans), the country can meet its commercial demands and fuelwood needs, besides easing the pressure on its natural forests.
Wood has been a part of Japanese culture and society from ancient times. Evidence dating as far back as the Jomon era (10,000-300 BC) - the New Stone Age of Japan - attest to the dependence of the Japanese on forests. As the nation's economy grew, Japanese feudal rulers embarked upon grandiose projects like building capital cities, shrines and monuments, which used up voluminous amounts of wood. For example, the Todaji temple built around AD 749 required 800 tonnes of charcoal for making the casting of a huge bronze image of Lord Buddha. This exploitation reached its peak during 1603-1867, a period when Japan was ruled by the feudal lord Tokugawa leyasu, who took the title of shogun (generalissimo).

Broadly, there were three categories of forest lands during the Tokugawa rule: the government or the lord's forests (jikiyama), which belonged to the shogun and the feudal lords; village or community forests (iriacichi) managed by villages; and private forests, owned and operated by individual households, temples and shrines. However, realising the commercial potential of forests, the Tokugawa rulers exercised monopoly rights and strictly regulated the production and distribution of forest products. In exercise of these rights, they occasionally declared a forest or parts of a forest as jikiyama, thereby prohibiting or strictly limiting public access to it. By the beginning of the 19th century, virtually all forests containing high-quality timber were expropriated by the Tokugawa shogunate.

In January 1868, the Tokugawas were replaced by imperial rule under Emperor Meiji. Seeking to put Japan on the trajectory of high economic growth, the government transformed Japan's highly fragmented forest systems into a uniform and modern one. Forest and wooded lands belonging to the shogunate and feudal lords, and that of most temples and shrines, were nationalised by the Meiji government. These, along with large areas of community forests, were combined to constitute the national forests.
PRE-WORLD WAR II: The Meiji government set up an institutional apparatus, the forest bureau, in 1879 to manage the national forests and oversee the implementation of the forest policy. The Forest Law was enacted in 1897, giving legal basis for the various forest categories such as reserved and protected forests. The special management project of national forests was initiated during 1899-1921 to undertake afforestation programmes on a large scale. The afforestation target under the project averaged about 4,000 ha per annum in the initial years, to a peak of 40,000 ha per annum in its final years. About 380,000 ha were estimated to have been afforested during the project period. The project also undertook anti-erosion and flood control works on a large scale. The government also tried to motivate the non-national - municipal and private - forests to take up activities to further forest development. The 1907 amendment to the Forest Law made it obligatory for municipal- and temple-owned forests to make their management plans for afforestation. In 1920, the Government Afforestation on Public Forests Law was enacted whereby the government promoted afforestation activities on municipal forests through a provision of seedlings and credit on a proceeds -sharing basis. A nationwide programme of afforestation, called Shokuju Shorei Kisoku, followed.

POST-WORLD WAR II: World War II led to unprecedented tree-felling and denudation of Japan's woodlands; a staggering 400,000 ha were laid bare in 1944. Restoring Japan's forest cover and rebuilding the war-ravaged economy were the major tasks confronting the government in the post-war period.

The forest cooperatives were reorganised in 1951, enabling forest owners to join or leave at will. However, memberships were made more advantageous to forest owners by introducing subsidies, loans and tax concessions for them. The government tried to encourage private forest owners to undertake afforestation activities through subsidies, soft loans proceeds -sharing arrangements, compulsory afforestation and other -schemes. A rise in timber prices following the increasing demand for timber and other forest products also improved the incentive for afforestation.

The Agriculture, Forestry and ration (AFFC), set up in Fisheries Corporation (AFFC), set up in 1953, extended loans for largescale afforestation activities. This was particularly beneficial to large forest land lords who were not eligible for afforestation subsidies. Acts such as the Law for Establishment of Forest Resources, (Shinrin Shigen Zosei-ho), enacted in 1946, and the Law for Special Measure for Afforestation (Zorin Rinji Sochi-ho), enacted in 1950, were introduced to promote aforestation activities. Under the first scheme, a planter could buy government-issued afforestation bonds at a cost of half the amount of the total cost of afforestation. This was to be purchased by the government at their par value upon completion of afforestation, which implied that half the amount of its total cost would be subsidised by the government. Under this programme, 157,000 ha were brought under forests.

Under the Temporary Measures Law for Afforestation around 1948, a five year plan was formulated to promote compulsory afforestation in cut- over forestry. Forest owners designated by the governors were obliged to afforest their cut-over forest areas within five years of the enactment of this measure. If a forest owner was unable to implement this, the governor was empowered to invite a third party to undertake the afforestation work and arbitrate a proceeds-sharing contract between the planter and the owner. As afforestation under this programme accelerated, the total afforested area rose to as high as 935,000 ha.

Under another scheme, denuded and cut-over areas in the up-country headwater zones were afforested. Two-thirds of the funds for the project were provided by the national government and the remaining one-third by the pre-fectural government. About 15,000 ha were afforested annually under this project between 1950-1956. The project continued subsequently as a government afforestation project from 1957- 1960 under the amended Government Afforestation on Public Forest Land Law, 1956. Later, from 1961, it was implemented by the forest development corporation and extended to municipal, hamlet or private forests located in headwater zones with proceeds-sharing arrangements. The annual area of afforestation, which was to the extent of 70,000 ha during 1945-47, rose to 400,000 ha after 1952. The total area afforested between 1951-1960 was estimated at 3.75 million ha.

However, once the forest cover was considered to have been restored sufficiently, the subsidy patterns changed. While afforestation subsidies were initially available for replantation works, gradually and especially after 1964, those works were eliminated from subsidy programmes. After 1973, they were available only for new plantings and for converting natural into human-made forests.

Data on Japan is from Forest Use and Management in Japan and India: A Comparative Study, 1996, by K N Ninan, published by the Institute of Developing Economies, Tokyo