The Andhra Pradesh government is all set to purify Musi river, which has been given top priority under the National River Conservation plan, by dumping effluents 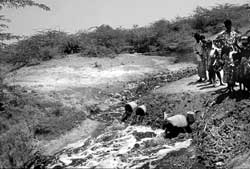 on december 2, 2001, prime minister Atal Bihari Vajpayee inaugurated a Rs 296-crore project to beautify Andhra Pradesh's Musi river. Top priority was to be accorded to cleaning the water body under the National River Conservation Plan. The state government, however, seems to have set its own agenda. In compliance with a 1998 Supreme Court (sc) order on curbing pollution in the Patancheru industrial belt and its adjoining areas, it intends to divert the effluents from this region into Musi river. Far from purifying the Musi, the authorities are likely to hasten its putrefaction.

An 18-kilometre pipeline will be laid to carry industrial effluents from Patancheru to the sewage treatment plant (stp) in Amberpet. Untreated as well as treated municipal sewage is already discharged from this site into Musi river, which emerges about 90 km to the west of Hyderabad and joins Krishna river in the Nalgonda region of the state. Now, effluents will also be released into Musi river after dilution with sewage. Incidentally, excessive pollution from Hyderabad has already killed the river in that stretch.

The sc had earlier observed that 56 industries were responsible for pollution on account of dumping of untreated effluents in the Isakavagu and Nakkavagu areas (tributaries of Manjeera river, which in turn is a major tributary of Godavari river). It directed the Andhra Pradesh Pollution Control Board (appcb) to issue notices to these units and identify other industries responsible for discharge of effluents, causing environmental degradation (see box: Peak pollution ). A recent report of the Comptroller and Auditor General has found gross irregularities in the implementation of the sc order.

The administration's solution of dumping waste into the Musi instead of the Manjeera or Godavari "amounts to merely shifting pollution from one area to another", says J Rama Rao, chairperson of Forum For a Better Hyderabad, a group of non-governmental organisations (ngos). Senior sources in the appcb admit that the stp is not designed to treat industrial effluents and is, in fact, not even able to deal with all the sewage reaching it currently. After the pipeline is laid, effluents from Patancheru to the domestic sewage line will include non-degradable and non-treatable inorganic salts, heavy metals and traces of pesticides and persistent organic pollutants.

Environmentalists have asked the authorities to roll back their decision and not portray it as the only solution. The alternatives to this pipeline include segregation and treatment of waste water at the level of the industry, installation of liquid incinerators for zero discharge of high organic wastes and changeover to cleaner waste minimisation technologies and processes requiring minimum water consumption.

As the Musi is likely to be awash with contaminants in the near future, only the state government knows how it plans to beautify the river.

With inputs from Binayak Das in Hyderabad