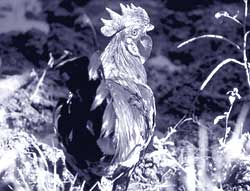 as much as 60 per cent of chicken genes correspond to those in humans, according to scientists who prepared the first avian genetic map -- of the red jungle fowl (Gallus gallus), a forerunner of the domestic chicken. This means majority of genetic material (meant for essential functions) has been conserved since birds and mammals started to evolve from a common ancestor about 310 million years ago.

The finding is gleaned from the draft chicken genome sequence, reported by the International Chicken Genome Sequencing Consortium in the December 9, 2004 issue of Nature (Vol 432, No 7018). A master blueprint of the human genome was announced in February 2001. After their lineages diverged, birds gained genes for proteins used to make feathers and beaks, while humans acquired genes for hair proteins and lost genes related to egg albumen and yolk.

The consortium constituted researchers from several Western countries, China, Japan and Singapore. The scientists also found the chicken genome is more compact than the human one. The former contains significantly less dna than the latter, but almost an equal number of genes. Researchers estimate the chicken has 20,000-23,000 genes in its 1 billion dna base pairs (base pair is a step or rung in the dna double helix ladder), compared with the human count of 20,000-25,000 genes in 2.8 billion dna base pairs. The difference is because the human genome has far more repetitive non-coding dna.

The draft genome was deposited in free public databases in March 2004. Over the past nine months, the scientists analysed and compared it with the genomes of organisms that have already been sequenced, including that of the human, the mouse, the rat and the puffer fish.

Some results of the genome analysis caught even the researchers by surprise. One was that a group of genes for odour receptor proteins has dramatically expanded in the chicken genome -- a finding contrary to the traditional view that birds have a poor sense of smell. But birds might not have such a great sense of taste. When compared with mammals, chickens have a much smaller family of genes for taste receptors, particularly those for detecting bitter sensations.

According to reports in Nature, the findings will also help poultry scientists breed better strains by recognising dna sequences for attributes such as egg production.

The chicken genome fills a crucial gap in our scientific knowledge as it is located between mammals and fish on the tree of life. Scientists believe that by comparing the genomes of a wide range of animals, they can better understand the structure and function of human genes, eventually resulting in new strategies to improve human health.

Birds are thought to have descended from dinosaurs in the middle of the Mesozoic era 225-65 million years ago. Chickens were first domesticated in Asia, perhaps as early as 8,000 bc.