This is the least value of "unproductive" work done by women in a year in India, and it is close to government's annual budget 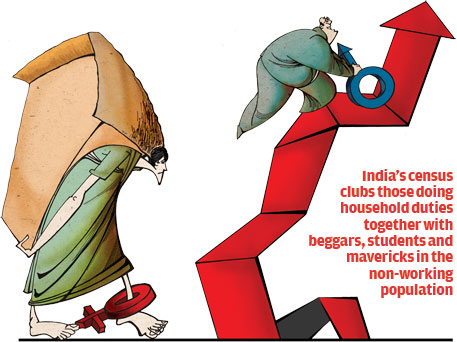 The government is perpetrating gender bias by not measuring women’s role in making up the gross domestic product (GDP) of the country. India’s census clubs those doing domestic chores together with beggars, students and mavericks into the non-working population. Census 2011 estimated the number of non-working population at 728.9 million. The authoritative definition says these are the people who had not undertaken work of any nature in the reference time period. Of these, 165.6 million persons’ main work was “discharge of household responsibilities”. They are mostly women—96.5 per cent or 159.9 million. Only 3.45 million men’s main work is homemaking.

If one believes that washing clothes, cleaning the house, cooking food and caring for children, the sick and the elderly also amounts to work with economic value, one will be able to better appreciate women’s contribution to the GDP. Most significantly, rearing children ought to be considered a highly specialised task.

In 2004, the Delhi High Court, when hearing a case of compensation for a woman’s death, had considered household work equivalent to skilled labour. It did so because there was no other scientific measure available to gauge the domestic work. Now let’s evaluate the economic worth of the work done by women considering the household work as a skilled job. Wage rates for skilled work vary from state to state, from Rs 224 a day in Gujarat to Rs 935.76 a day in Uttarakhand. The average minimum wage works out to be Rs 283 per day. At this rate the annual wage bill for 159.9 million women categorised as “non-working” population would be a whopping Rs 16.29 lakh crore. This is slightly more than the revised estimate of the annual budget of the Government of India at Rs 15.90 lakh crore for 2013-14.

What’s more, women render these services day after day, year after year, without a break and in silence. There is no leave or holiday for them. Nor do they go on strike. This segment of the population is beyond the usual definition of organised or unorganised work.

There is a clear need to not only recognise this work but also redistribute it. Household duties should be shared among the members of a family. A study in Uttarakhand, published in 2011 in Mountain Research and Development Journal and titled “Women’s Contribution to Household Food and Economic Security: A Study in the Garhwal Himalayas, India”, drives home this point. Women in the mountainous region reported they “did not do any work”. However, when their activities were analysed, it was noticed that while the men in the region worked for nine hours a day on an average, the women were toiling for 16 hours. If the then applicable rate of minimum wages were applied, men would have earned Rs 128 per day, while women’s income would have been Rs 228 per day. When some of these activities were assessed on market rates, it was found that a family would have spent as much as Rs 34,168 in a year for obtaining things like wood, animal feed, honey, water and vegetables.

Evangelical Social Action Forum, a charitable society, and HealthBridge, a non-profit, carried out a similar study in Nagpur in 2009. Their findings show that if the work women perform as homemakers was to be paid for, it would fetch them Rs 1,350 per month in rural areas and Rs 2,750 per month in urban areas.

Women’s work as homemaker is a direct contribution to our economy. It must be acknowledged so that they are duly recognised as workers and their political, economic, social and cultural entitlements are secured. However, this group of labourers does not have any policy, programme or budgetary allocation to meet its rights pertaining to health, nutrition, motherhood, security, justice, economic independence and social equality. The National Food Security Act for the first time made a modest provision for motherhood, but the government does not appear to be inclined to implement it.

There have been occasions when courts have underlined the need to recognise the value of domestic work. Justices G S Sanghvi and A K Ganguli of the Supreme Court in 2010 raised the compensation to a family for the death of a woman member, keeping in view the ascribed economic value of the work done by her as a homemaker. The court had also expressed shock at the fact that in census data homemakers were equated with “beggars, prostitutes and prisoners”. The court had then observed that it “betrays a totally insensitive and callous approach...indicative of strong gender bias against women”.

In case of an accident, the compensation for the death of a woman is negligible compared to that for the death of a “productive” man. Whenever this aspect is taken up for a debate, a section of society questions the very need to measure the role of a mother, daughter, wife or a sister in monetary terms. Another section argues that after all, expenditure is also incurred on the food, living and medicines of women engaged in household chores. However, the same work when done outside one’s home acquires economic and productive status. Thus, two sets of yardsticks and beliefs are applied to the same labour.

The Ministry of Statistics and Programme Implementation is trying to bring some insight into this issue. It is set to start capturing women’s contribution to employment and economy through time-use surveys, which give a detailed breakdown of time spent by people on various activities, hour-by-hour and day-by-day.

Now that the country considers economic progress as a measure of “development”, it becomes all the more necessary to ascribe an economic value to women’s contribution.

The author is a social researcher, trainer and team member of Vikas Samvad , a non-profit in Bhopal