Pesticide regulations in India are lax. The industry has exploited the loopholes to corrupt the system. And the government has turned a blind eye to the problem 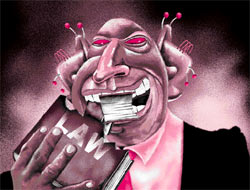 Pesticides are regulated under the Insecticides Act of 1968 and Insecticides Rules of 1971. In May 2000, the Insecticide (Amendment) Bill 2000, was passed under the shadow of suicide deaths of farmers because of spurious pesticides. This amendment made the punishment for adulterated pesticides more stringent. But it did little to clean up the regulations to register pesticides and to monitor this poison industry. The insecticide act regulates the import, manufacture, sale, transport, distribution and the use of insecticides to prevent any risk to people and animals. The registration committee, constituted under Section 5 of the act, registers an insecticide after verifying its efficacy and safety to human beings, animals and the environment. The Central Insecticides Board (cib) based in Faridabad, Haryana, advises the Union and state governments on technical matters. In 2001, a total of 2,718 applications were received for registration, of which 1,439 were approved, according to the government.

Basically, there are two types of registration under Section 9 of the Insecticides Act -- primary and secondary. When a new molecule is registered in India it gets a primary registration. Subsequent applications for the same molecule get the secondary registration. Registering a new molecule requires the generation of studies -- environment dependent data conducted under Indian agro-climatic conditions and environment independent data.

Environment independent data can be straightaway lifted from existing data elsewhere in the world. But generating environment-dependent data usually takes around 4-5 years. Data sets on various subjects including toxicology and phyto-toxicology need to be generated to register any new molecule. Once a primary registrant exists, others applying for fresh registration are given a secondary registration.

Of course, these are just rules prescribed by the government. These are rarely followed.


The first step to register a new pesticide is the generation of data. This is also the first step where corruption can creep in. A company has the option of either going to a government lab or a government-approved private commercial labs. "Companies usually prefer government-approved commercial labs as they can generate the desired results. And quickly. Bureaucratic hurdles in government labs can cause long delays," says N G Waghle, former vice-president, Pest Control India Limited. Private labs are primed to cater to the industry's demands, he adds. Where everything comes at a price.

"Indian registration procedures are hopeless. It is a big tamasha," says P D Deshmukh, a senior pesticide industry insider. With an experience of 30 years with the industry, Deshmukh has amazing tales to narrate. "I know of one lab which promised to generate toxicological data for a product within a day. Generating this data usually takes one to one and a half years. The head of the lab told me that he would prepone the exchange of letters by one year -- making it look as if the application was filed a year ago. Many multinational and Indian companies are a part of this racket," alleges Deshmukh. "It is scary to imagine how many dangerous pesticides would have made it to the farms without proper testing," fears Waghle.

Recounting his 35 years of experience in the industry, Waghle, recounts shocking tales of how companies have corrupted even top officials in pesticide registration bodies. "Companies are wary of directly approaching cib officials, so they use the services of a broker," he says. Agents act as a liaison between the industry and cib. Bribing of junior and senior officials at cib takes place through these designated agents. The industry has developed the bribing of officials into an art form. And the agent is an integral part of this racket.


The broker is usually a regular face at the cib, says Waghle. So even officials feel comfortable interacting with him. Industry pays this agent for all the dirty work that they want to get done -- registration of a new molecule or stealing data for already registered molecule or even bribing the registration committee members to influence decision-making at the top level. But the bribe is not always money.

Many top cib officials, including the registration committee members, regularly receive junket invitations, says Waghle. The company pays for all the expenses -- air tickets, five-star hotel accommodation and even shopping expenses. Again there is no direct involvement of the industry. It is done through the agent. "The official simply has to inform the agent, who then gets in touch with the company. The company pays the agent for all the dirty work," he adds. Waghle has given Down To Earth names of a few of the legendary agents and their clients.

The laws itself are geared to protect the industry. The endosulfan establishment has used these loopholes to great advantage. For example, the pck violated many regulations while conducting aerial spraying. The insecticides act makes it mandatory for a company to inform people about aerial spraying of pesticides. All waterbodies in the area must also be covered during spraying. But this was not done by the pck. "The cib has prescribed that the endosulfan spraying should be undertaken at a height of not more than 2-3 metres above the foliage. But even this was always violated in the pck plantations," says L Sundaresan, former director, department of agriculture, Kerala.

The Union government made some tired efforts to make pesticide use "safe". It appointed committees. These committees allowed the use of endosulfan with a word of caution: pesticides must be used very carefully and specified areas where they must not be used. In 1991, the Union government appointed a committee headed by S N Banerjee, former plant protection advisor to the government, to review whether some pesticides, including endosulfan, should be used in India. The committee said that the registration committee of cib should not allow the use of endosulfan near rivers, lakes, sea and ponds. The committee also recommended a warning must be displayed on all labels and leaflets of containers. As far as other warnings are concerned, companies display them in such small point size that it is unreadable.

Another committee headed by R B Singh, made similar recommendations in 1999. It reinforced the fact that labelling should be made mandatory in bold letters to avoid use of endosulfan near water sources. The 195th meeting of registration committee of cib, held in December 1999, agreed to implement the recommendations. But they were never actually implemented. The cib has chosen to sit on these recommendations. Endosulfan is still used indiscriminately, as the Kasaragod tragedy shows.

The pesticide industry does not like the regulations of the insecticide act saying that the cumbersome procedures for registration are strangling growth. But, seeing the way the industry has sidestepped, indeed, trampled over all procedures and norms of decency in the endosulfan case, it is clear that this "dirty" business needs more, not less, controls. But this time it needs monitors who will have public accountability. Otherwise, this industry of death will become even more deadly in the years to come.