The key actors in the government responsible for implementing the Supreme Court order do not share the vision to safeguard public health. An incredible effort is being made to secure the diesel market for the state-owned refineries, a segment of bus manufacturers and the corruption that pervades the diesel market.

Suffering at their hands are thousands of drivers and owners of cng three-wheelers spending harrowing hours at the filling stations. The total lack of safety regulations have further helped to raise doubts about the CNG technology. The media has highlighted many developments and difficulties but has often missed out pointing who is behind this mayhem in the city. And why.

Ministries responsible for implementing the court orders on CNG have constantly found new bogeys and bottlenecks to derail the order instead of taking proactive steps to implement it. MPNG , the central ministry responsible for allocation of CNG to the various sectors of the economy, supply of CNG to Indraprastha Gas Ltd (IGL) as well as its pricing says that it will not be able to provide gas to meet Delhi's vehicular needs. The ministry of road transport and highways (MRTH), which has been completely indolent regarding the setting up of adequate emissions norms and testing procedures, has slipped yet again by not putting in place any safety requirements for CNG vehicles. The saga of delays, incompetence and disinformation goes on. Here are reports on what these wonderful gentlemen have been up to? 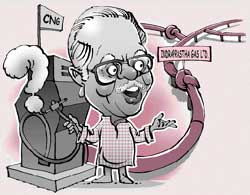 Ram Naik's Ram Rajya
Ram naik is a state capitalist. He oversees state companies. He is busy distributing state largesse. The ministry of petroleum and natural gas (mpng) , the ministry he heads, has been busy distributing natural gas to all and sundry through the Gas Linkages Committee, responsible for allocating natural gas to different users, even after the July 28, 1998 Supreme Court order. These include Essar Oil Ltd, Reliance Refineries Ltd, Indian Petrochemicals Corporation Ltd, National Thermal Power Corporation (ntpc) and others. Even the prime minister's constituency, Lucknow, and the minister of state for petroleum, Santosh Gangwar's constituency, Bareilly, have been graciously allocated natural gas for cooking purposes.br>
But Ram Naik is busy arguing there is no gas to meet the Supreme Court's order. If pushed, mpng can give cng to buses but not autos, taxis or cars. This is not all. Naik has been busy raising other fears. One, the entire city's bus fleet running on cng will come to a halt if the gas pipeline bursts or is even under repair. Two, cng prices will shoot up once the administrative price mechanism for petro-fuels is dismantled. The epca considered all these arguments but found them either unfounded or that they can be dealt with, of course, if there is a will to do it.

There is no shortage of gas per se . It is merely a question of allocating enough of it to meet the transport needs of Delhi on a priority basis that needs a mere 1.13 million cubic meter (mcum) of gas out of the hbj pipeline's capacity of 33.4 mcum in the initial years. Ironically, even as public transport is starving of gas, it is being supplied to five-star hotels and affluent households in posh South Delhi colonies where substituting lpg with natural gas will not make any difference to air pollution levels.

But why are there such long lines already forcing autodrivers to stand for hours on end in the sweltering heat of Delhi? Queues had already begun to form by March 2000 when the court hearings were taking place. Let us look at the track record of the MPNG since it started interfering. The ministry not only failed to ensure that all the 80 CNG stations mandated by the Supreme Court were built in time, the quality of the stations built was also poor. About 50 per cent of the CNG stations had no compressors. As a result, they dispensed gas at low pressure and left the tank partly empty - something which no auto driver wants. The result is that they all go to a few stations with compressors resulting in long lines in front of them. Compare the situation in Mumbai and Delhi. In Mumbai, there are only 24 CNG stations and all have compressors. In Delhi, there are 75 stations and only 35 have compressors.

Then there is Naik's threat to raise natural gas prices on account of large investments and losses incurred by IGL. Can any company incur losses with such a high demand for its product, over 100 per cent utilisation of its installed dispensing capacity, and the fact that there is no subsidy on CNG. Indeed, as can be expected, the annual report of the IGL shows that the company has been making a profit since its inception. Founded in late 1998, it had a net profit of Rs 40.5 lakh in 1999-2000 and Rs 1.8 crore in 2000-2001. Of course, when Naik wags the CNG cost tag don't expect him to link it with the countervailing health costs of air pollution, conservatively estimated by the World Bank at Rs 1,000 crore per annum in Delhi. In any case the public incentive for CNG comes not out of the price of CNG but in the price difference between CNG and petrol or diesel. The government can play an important role through taxation measures to keep polluting fuels more expensive. But don't expect Naik to touch diesel, the holy cow.

Naik cries foul about gas supply when, under the aegis of his own ministry, massive expansion plans for gas pipelines have advanced considerably. While any possibility of disruption in supply of gas is very remote, it is possible to store natural gas in several ways and would be desirable. But the MPNG has paid no attention to developing such contingency plans even after raising the fear of breakdown of gas pipelines. Aren't these contingency plans necessary in any case - for users of CNG like power and fertilizer plants, for households using gas for cooking, and, of course, for buses, regardless of whether one-third buses of Delhi run on CNG or all? Or has the government already made up its mind to supply natural gas as erratically as electricity? Gas storage is routinely undertaken in all Western countries to meet the peak demand for gas for heating households during the winter season. During off-peak periods, part of the pipeline gas is converted to liquefied natural gas (LNG), which is then stored in large tanks. The pipeline itself stores an enormous amount of gas. Natural gas can also be stored in depleted aquifers or underground caverns. Surely, our engineers who can make nuclear bombs and missiles and store used uranium from power plants, can learn how to store natural gas. Unfortunately, Naik doesn't think his engineers are that capable.

All these issues will now keep hanging till the Supreme Court takes a decision. Then the wonderful politician will cry 'judicial activism'.