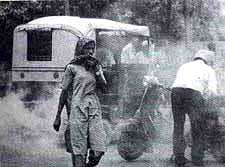 ESTIMATES of air pollution in Delhi caused by various sources vary, except in the case of vehicles. K P Nyati of the Confederation of Indian Industry (CII), says about 70 per cent of the air pollution is caused by vehicles, about 20 per cent by power plants and the rest is from industry and other sources. However, according to B Sengupta, a scientist with the Central Pollution Control Board (CPCB), power plants account for 10 per cent of the Capital's pollution, industries 16 per cent and others 4 per cent.

In the past, non-governmental organisations have highlighted the plight of pollution-affected areas and people. The government also did its bit, but NGOs seemed to have a higher success rate. Taking a leaf out of their book, the CPCB set up an NGO Cell in August last year to aid its pollution combat programme.

Says A P Srivastava assistant secretary in the CPCB, "The formulation of this Cell is a recognition of the good work done by NGOs and the fact that NGOs reach and convince people in a way that government-aided programmes do not. NGOs will plug loopholes and supplement work done by government agencies."

The NGO Cell will enlist NGOs involved in pollution control activities and promote the participation of such NGOs. It will establish a network in consultation with state pollution control boards. One of its major functions will be to train the NGOs and equip them with water testing kits, analytical instruments, books and literature. It will also organise and implement mass awareness programmes through the NGOs.

The CII, too, is taking up pollution control, but its attempt is to reach the root of the problem. CII advises industries to change manufacturing processes and raw material and convert waste to useful products. By this, manufacturers can not only ensure the use of least environment-damaging processes but also enhance income though waste recycling.

Says Nyati, who is senior adviser (environment) of CII, "NGOs can at best point out deficiencies and draw the attention of regulatory bodies to polluters. I'm not saying the NGO Cell is useless, but instead of indulging in short-term activities, the government should take a holistic view of the problem.

Activities such as cells, effluent treatment plants and pollution checks of cars should be done, but that's not the solution. The government should first address itself to the burgeoning population -- the less the number of people, the less you take from the environment and the less you return in the form of wastes."

In Bombay, the Clean Bombay Foundation runs a programme to collect and household The rubbish is sent to recycling units such as Excel Industries, which gets 50 tonnes of garbage everyday (See page 37). This system has led to better economic conditions for ragpickers and has generated awareness among the people.