Impending doom has prompted villagers in Bihar and Orissa to protect their forests from natural calamities. And humans 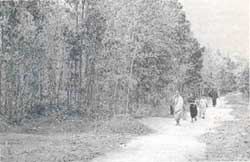 IN THE summer of 1970, Nunaram Mardi of Bhitardhari village in Bihar's East Singhbhum district espied a lone female monkey on a treeless rockface, desperately trying to shield her baby from the harsh sun with her body. "She was searching for shade, but could not find any," Mardi recounts. "On our return, we called a meeting to warn the villagers that we were likely to face the same plight soon." The residents of the small village of about 40 households of mainly Kurmi peasants realised that protecting the forests "was a question of survival", says Mardi. This sparked off an informal but collective conservation effort.

The regeneration and protection of local forests in most villages have been responses to particular crises: excessive exploitation, drought, or clashes with neighbouring villages. In Marangmali, in Bihar's East Singhbum district, a village near the industrial town of Tatanagar, a sustained drought from 1976 to 1979 ruined the forest cover. Many villagers who depended on these forests for their everyday use were left struggling.


"The situation was so bad that many were beginning to give up hope and were planning to go away, as we have no other resource apart from these forests," recalls Ban Bihari Sardar. Desperate to save their precious resource base, in 1979 the villagers started protecting the forests in an informal, word-of-mouth manner. In 1980, they set up a committee to regularise the protection, expanding the body to encompass 6 other nearby villages as well. The leadership is rotated annually among these villages; at present, it lies with Marangmali, with Sardar as the chairperson.

Unlike Marangmali, the crisis in Mayaram Jaradi and Basantpur was not caused by a natural calamity, but because villagers themselves ravaged their forests. Mayaram Jaradi, a village of about 500 people, mostly Munda tribals, lies in East Singhbhum district. "We had to do something immediately as the forests were heading for total destruction," says 50-year-old Babulal Simunda. Although no villager knows the exact area of the forest they have regenerated, Durgacharan Munda of the village panchayat estimates it to be approximately 60 ha.

Anil Mahato says that the regeneration effort began about a decade ago, after the forest department undertook tree planting around the village. "But all the saplings died within a year because no one bothered to look after the trees," he says. "We realised that if the forests have to be regenerated, we have to undertake the task as we are the users."

Basantpur, a village of about 500 marginal farming households, lies in a wide valley in south Bihar. Its forest is located at a distance of about 7 km. According to 85-year-old Radhanath Singh, a resident of the village, "The ruler of Podma (Hazaribagh) used to come to our village for leisure and also made use of our manpower for labour. When he asked us what we wanted in return, our ancestors asked for a patch of forest. So he granted the village this forest." The year of this largesse has, however, faded from collective memory. Adds 80-year-old Siri Sahu, "Many decades ago, we faced a severe drought as the forests were badly depleted. It became difficult for us to fill our stomachs." These experiences prompted the villagers to start protecting the forest as early as the '30s.

However, every time the forest grew back, it would be cut down, leading to another bout of protection. "We also used to take wood from this forest, but then we have a right over it," says Bhubaneswar Sahu, the mukhiya (head) of the village. "The problem started when villages without any rights to the forests started violating them." According to him, the violators justified their actions by saying the forest was on forest department land and as such Basantpur could not claim special rights over it. "But the forest is ours, which is why we are saving it," says Dariknath Singh of the village. At present, the villagers are protecting an impressive 600 ha.

A sense of ownership came with the involvement of the entire village community in deciding the methods and mechanisms of protection. Protection committees have been formed in all the villages, usually independent of the panchayat. At Mayaram Jaradi, the committee was made up of village elders and community leaders. At Marangmali, the elders assembled the entire village and discussed the need to protect forests. After this there was a formal election, in which the office bearers of the van suraksha samiti (forest protection committee) were chosen. The samiti then laid down the protection process in detail, after discussing it with the other members of the community.


In Kudamunda village in the Sambhalpur district of Orissa, the village youth club initiated the process. Here, the committee, which protects 40 ha of forest, is distinct from the panchayat but does not hold formal elections. Some villages, like Gumlai in Orissa, have women on their samitis as well, but in other villages, the women are not as involved in the decision-making process.

The role of these samitis is primarily to monitor the protection effort of the village. It has to decide how the forest has to be exploited under restricted conditions and what is to be done in case of violations. As in Lapanga in north Orissa, the samitis of most villages have decided to use only the minor forest produce of the forests. There are variations, however, depending on the kind of degradation as well as ecological and economical factors.

The village of Ramgarh, near Tatanagar in south Bihar, has been protecting its forests since 1984. Predominantly inhabited by Munda and Santhal tribals, the village had virtually become a desert. Now the mud track leading to the village from the highway is bordered by a lush green forest of young sal trees. "When the rainfall started decreasing, we realised that it was because of the depleting forest cover," Mohan Singh Munda. The villagers then decided to prohibit exploitation of the forests for timber. Initially, no one was allowed even to go inside. Now only the minor forest produce is allowed to be collected, that too when it is on the forest floor. The fact that this stricture was unquestioningly followed was evident as none of the villagers were willing to pick leaves from the trees, even for a photograph.

Similarly, Gumlai in north Orissa protects 130 ha of its total of 200 ha of forests. Here too, the village decided that, from these 130 ha, only minor forest produce on the forest floor would be used. The remaining 70 ha caters to the fuelwood needs of the village. Gumlai's forests have species like sal, piyasal, kendu and mohuro.

Unfortunately, not everywhere were the rules of forest use followed implicitly. "There is definitely occasional theft from the forest," says Subhash Sahu of Basantpur. "But more often than not, it is people from outside who steal."

All the villages have established their own mechanism to stem these thefts. Says Simunda of Mayaram Jaradi, "Right from the beginning, we started performing guard duty. A group of 22 to 24 men go into the forest every day and keep a look out for intruders." To regularise the affair, a register is maintained and a roll call is taken of those who are supposed to be on duty. In Basantpur, the group of guards consists of 10 men. Here too, the village committee maintains a register. Men from Marangmali do guard duty every alternate day. In Bhitardhari, however, the onus of keeping a watch does not rest on a particular group or person. Anybody who goes to collect minor forest produce also has the additional responsibility of looking out for intruders. "This way, in our village, everyone -- men, women, and children -- is directly involved in protecting the forest," says Mardi.


Some villages find it more convenient to employ guards. Some, like Lapanga, even have 2. "Earlier, we used to worship a deity of the forest by the name of Dalki Devi. The fear of offending this deity used to keep intruders at bay," says Purna Chandra Das. "But the effect of this wore off after some time." Radhashyam Dhurva, one of those who guard Lapanga's protected forest, says, "I know the value of the forest for the people of the village, so I am willing to protect it with my life." Each guard is paid half a kilo of rice a month by each household for his labour.

Violators face a range of punishments, from warnings to fines. "If we catch someone from our own village stealing wood, the person is completely ostracised from the community," says Dulal Mahato of Mayaram Jaradi. "We do not even let that person use the village well," he adds.

At Basantpur, the punishment is less severe. "When we catch someone, we take away the stolen wood and warn that person to not return," says Radhanath Mandal. "We also try and explain to the person why we are taking such steps so that our effort spreads to other villages as well," he adds. At Marangmali, intruders from outside are given a sound thrashing before they are let off. The protection committee of Kudamunda has a stratified systems of fines. "The rich have to pay more as fine than the poor, as fines are decided depending on the capacity to pay," says Aditya Badhai. At Sangramal, in Orissa, the villagers impose a fine to keep intruders away.

Yet, most other villages prefer to have the forest department fine the offenders. "After all, we are not doing all this for financial gain. We do not need to go out to the city and spend money to buy wood from the market," reasons Chandan Bhoi of Gumlai. "The intention is to ensure that the village will have a constant supply of wood for a long time," says Radhamohan Das, former president of the village protection committee. "We are not vested with the authority to demand monetary fines," adds Mohan Singh Munda of Ramgarh.

The Lapanga village committee has, however, found a way to beat this: it fines offenders and, in the samiti accounts, shows the money as "compensation" for the wood cut. The Lapanga protection committee has amassed Rs 10,000 from such measures and has a fixed deposit in the local bank. The interest from this is used for community expenditure such as celebrating festivals, building tanks or repairing the school building.

Once people realised that the receding green spelt doom, they took their destiny into their own hands. Forest management techniques based on experience and tradition mingled with commonsense were tried out. The economic benefits of such afforestation are becoming apparent and nobody wants to look back.