Nightmarish laws and an insensitive government keeps thousands in the dark 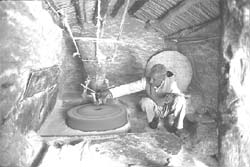 In India, the Central Electricity Act, 1948, does not allow individuals, communities or cooperatives to take up electricity generation and distribution. Only a private company bound to sell power to the government can do so. Of course the company has to sell power at rates the government fixes. Since such rates are usually subsidies, projects become economically unviable. A joint study of India's rural energy market by the World Bank's Energy Sector Management Assistance Programme and the Winrock International observed: "It becomes clear that the biggest barrier to the commercialisation of renewable energy is political."

Ask watermill ( gharat) owners in Uttaranchal, a solid body of more than 70,000, each a potential electricity producer. Convinced that the government grid could not reach them, they have been demanding that the gharats be upgraded and allowed to generate electricity for local use. "Our basic and primary need is lighting at night. And it is more important for the schoolchildren," they say. In up 's Chamoli district where the Chipko movement started, electricity is the last thing that the local residents can dream about. This, despite the national grid's omnipresent pylons. For months residents go without electricity and life comes to a halt in the evening. In Uttaranchal about 3,000 villages are yet to be electrified. Ironically, these are the villages with maximum hydropower potential. "Two small hydropower stations near our village are not functioning for the past five years," says Jayanti Prasad Matiyal, a resident of Gadora village in Chamoli and also the secretary of Chamoli Watermill Owners Association, formed to fight for rights to electricity generation through the gharats . Similar stories abound in India's 10 Himalayan states that have 70 per cent of India's total hydropower potential. Though the potential of small hydro projects is estimated at 10,000 mw, only 210 mw has been tapped till now through 267 projects.


Rural electrification in India is a state subject and comes under the jurisdiction of state electricity boards. But the nodal agency is the Rural Electrification Corporation ( rec ) which implements national programmes through the state boards. By 1995, more than 85 per cent of the 580,000 villages were electrified. Even then, only 30 per cent of households can access electricity.

There is desperation for electricity in rural areas and villagers are ready to pay for it, says Anil Joshi of the Himalayan Environmental Studies and Conservation Organisation ( hesco ), a Dehradun-based ngo . Highly centralised and heavily subsidised, conventional generation makes electrifying hill villages difficult. Centrally generated power may be cheaper, but transmission and distribution to these remote areas pushes up costs. Enter subsidies to maintain a low tariff: for the state electricity boards, a financial crunch. Chances of these remote villages getting connected to gridlines appear to be bleak.

Government subsidies on conventional (non-renewable) source of electricity makes renewable electricity sources unviable. The share of hydelpower in the total installed capacity in India has been declining in successive plans. In 1967-68, hydro projects had a 46 per cent share in the total installed capacity, which has already declined to 24 per cent in 1998. Only one-third electric supply is consumed in the rural areas, despite the fact that three-fourth of total population is living in rural areas.

"A decentralised power generation is the best thing to happen," admits Praveen Saxena, director, ministry of non-conventional energy sources ( mnes). This ministry is the nodal agency to implement small hydro-power projects. Since mnes has a mandate to manage hydro projects for up to 25 mw requiring investments of Rs 10-20 million per project, the government has focussed on private commercial participation. The government of India declared a 'policy on hydro power development' in August 1998 to exploit the hydro potential of the country at a 'faster pace'. Says Dilip Singh of Tata Energy Research Institute ( teri), New Delhi: "If you build a powerhouse in these remote areas and don't involve the community then it is not going to work." In the northeastern the governments set up few run-of-the-river power projects. "The local demand and local participation were never considered vital for these projects. So turbines worth millions are lying unused," he says.
"We are obsessed with the grid quality electricity and big projects," says Anil Joshi. "The government forgets that the remote villages remain in darkness despite their enormous hydropower potential." "These villages suffer from a system that insists on big projects and doesn't want to give up its control over the generation of electricity," says Anmol Jain of Rural Entitlement and Litigation Kendra ( relk), a Dehradun-based ngo . Says M Kannappan, the minister of state for renewable energy sources: "A country like India must commit itself to sustainable levels of generation and consumption of energy, so as to ensure energy to the future generation." He was speaking in context of the proposed new renewable energy policy that advocates community participation for rural electrification. In fact, only in the Ninth Plan, India for the first time focussed on a long-term energy policy. The proposed new renewable policy is an attempt to correct the past mistakes. The lack of political will to decentralise the power is evident from the experience of the agitating gharat owners in Uttaranchal. Since 1989, gharat owners have been demanding upgradation (see box: wheels of power ).

Going by the estimate of the National Watermillers' Association, half a million gharats can generate about 2,500 mw of electricity, at the rate of 5 kw per gharat , and a cash generation of Rs 1,200 million per hour. Though the Indian government realises their potential, a political will to go for a decentralised generation is lacking. Of course, mnes does have some microhydel programmes, but they are just demonstrative projects. Despite the government's apathy, many states are realising that the community-based run-of-the-river hydel projects can do away with their power crisis. States such as Kerala and Himachal Pradesh have initiated their own version of decentralisation in power generation. In Kerala, under the people's plan, panchayats are giving more and more allocation for microhydels (see box: Southern connection ).

"A state like Himachal Pradesh is 100 per cent electrified, but still there are many settlements on remote hills that still have to be electrified. For that we need community-based power generation," says Anil Kumar Kochi of Himurja, the state's nodal agency to implement renewable energy programmes.

Himachal Pradesh is the first state to initiate tangible changes in regulations for involving community, ngo s and cooperatives in power generation. Says Prem Kumar Dhumal, the chief minister of the state: "Electricity being the basic need of the community, they should manage it. Despite legal hurdles, we will work towards giving them the right to manage it." The state government pushed through a landmark amendment to the Electricity (Supply) Act, 1948. With the President's assent to this amendment in April, 2000, the state is now ready for processing proposals from community or cooperatives of users. According to officials, there are already a dozen proposals from communities. As a part of its community-based electricity generation policy, the government has decided to upgrade the g harats by up to 3- 5 kw .

Back to Sahashradhara. The thousand streams and as many reasons are reminders as to why the powerhouse was abandoned. But Rajendra Prasad is optimistic. "It would open one day," he says. Indeed. Sahasradhara's children can study at night, if only the example of Nepal's Piughar is emulated.

With inputs from S S Jeevan and C Surendranath in Kerala