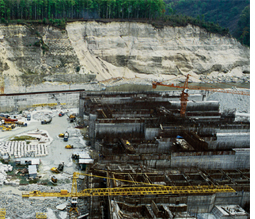 Saturday, July 7. It's day 18 of an indefinite hunger strike by tribespeople of Sikkim's Lepcha community and there's no end in sight. Protests against the imminent influx of a series of dams on the river Teesta and its tributaries in the remote mountain regions of North Sikkim district have gathered steam over the past month, but with chief minister Pawan Kumar Chamling away on an overseas vacation, talks with government are deadlocked.
Two months ago, Dawa Lepcha was desperately looking for means to rouse his fellow Lepchas against the "irreparable damages" that the proposed dams would cause to North Sikkim's ecosystem. He had been working at it for three years--gathering information, travelling to distant villages and talking to local people--but just couldn't make much headway. "It's a really, really uphill job," a frustrated Dawa had said then. "No one listens."

But now, people are paying attention.On June 20, Dawa, who's a 33-year-old documentary filmmaker and Tenzing Gyatso Lepcha, a student, went on an indefinite fast, demanding all six mega-hydel projects in the Dzongu Lepcha Reserve be scrapped. They've also demanded the state review the impact of all 27 hydel projects proposed. Protesting under the banner of Affected Citizens of Teesta (act), Dawa's group is getting overwhelming support from different local outfits and from across the country and abroad. Lepchas from Darjeeling and Kalimpong have been gathering in front of the Bhutia-Lepcha house in Gangtok where the 'satyagrahis' are ensconced. Several are even joining the fast for a few days. Dawa, despite being on liquid-only diet, is upbeat. "Initially, we were a bit apprehensive but the overwhelming support that we have been getting has reassured us," he says.
There are plans for 27 projects on the Teesta and its feeder rivers and tributaries. Contracts for three of these, including the Teesta Stage v project at Dikchu in North Sikkim that is nearing completion, have been awarded to the 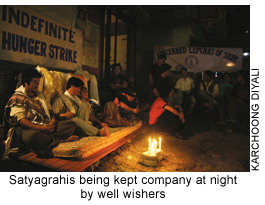 National Hydroelectric Power Corporation Ltd (nhpc), a public sector unit. The rest are to be set up by private developers. So far, Teesta Stage v is the only project under construction. The rest are in various stages of clearance.

Plans for taming the Teesta, which flows through almost the entire length of Sikkim before entering north Bengal, are not new. A proposal has been in place for harnessing the river since the 1970s. More recently, in 2001, the Central Electricity Authority calculated the state had a hydel potential of 8,000 mw and identified 21 possible dam sites. In 2003, Sikkim launched an initiative to harness 5,000 mw of this potential by the end of the eleventh Five Year Plan.

"Sikkim will get 12 per cent free electricity from each of these projects, which it will sell to other states," says A K Giri, chief engineer with the state energy and power department. Sikkim at present has a 35-mw power deficit, which it makes up by importing power from the central sector generating stations. After the projects are completed, officials estimate that Sikkim could expect around Rs 750 crore by selling the surplus power generated.

However, the proposed projects have raised concerns among environmentalists and peoples' activists regarding theircumulative impact on the landscape and its people. Teesta is a highly volatile, flood-prone river. The river and its tributaries constitute a basin, which with its deep forest cover and rich biodiversity, is considered an integral part of the Indo-Myanmar biodiversity hotspot, one of the 25 such hotspots in the world.The Teesta River Valley system sustains a host of indigenous communities, including the Lepchas, Bhutias, Sherpas and Nepali ethnic groups, who have traditional natural resource-based livelihoods. The area is also earthquake-prone and includes a series of landslide and landslip zones (see box No safe play).


For the Lepchas who are opposing the projects though, the issue goes beyond environment and livelihood concerns. The dams, they feel, are a threat to their very identity as a people.

Believed to be the original inhabitants of Sikkim, the Lepchas (along with the Bhutias, who are said to have come from Tibet during the 15th and 16th centuries) were once the ruling elite of Sikkim. But large-scale migration of people from neighbouring Nepal over the past century has changed the demographics. Sikkimese of Nepalese origin now constitute almost two-thirds of the state's population of 500,000, while the Lepchas who number an estimated 45,000, make up a mere 9 per cent.

Dzongu, which was declared a 'Lepcha Protected Area' in 1956 by the then maharaja of Sikkim, is the only remaining Lepcha bastion. Entry to the area, which borders the Khangchendzonga Biosphere Reserve, is restricted and no outsider, even other Sikkimese, can own land here. About 6,000 Lepchas live in Dzongu in small villages among the forested slopes of the reserve, high above the Tholung valley through which the Rangyong river runs. The Lepchas call themselves rngkup, or "children of the Rng valley". For them this land--which they call "hidden paradise" or "land of eternal purity"--is sacred. They believe the first Lepchas lived here.

The plans for six mega hydel power projects--from Tholung to Lum--would upset the natural order of their sacred land, say Lepchas. "Location of

projects are in some cases just a few kilometres from each other and at places the entire river will disappear into tunnels. That will destroy our culture which is deeply connected with the Teesta and Rangyong rivers, says Testen Lepcha, chief coordinator of act.

Already concerned about being eclipsed by the expanding Nepali population, Lepchas worry that the projects would lead to an influx of outsiders--labourers and contractors--into their land. They fear that this could lead to a dilution of their dwindling tribe and their ultimate marginalisation, even in the reserve area. "We will become strangers in our own land," says Testen.


To have greater say in matters regarding their land, the Lepchas are considering campaigning to get Dzongu listed under either Schedule v or Schedule vi of the Indian Constitution.

When Sikkim was annexed to the Indian State in 1975, it wasn't considered for Schedule v or Schedule vi status. However, Article 371-f of the Indian Constitution gives special protection to the rights of Sikkimese people and upholds the old, pre-accession laws of the state. Since Dzongu was declared a protected area by the erstwhile king of Sikkim, its special status is upheld by the Constitution. But this protection isn't very strong, as it is subject to the caveat that the pre-accession laws can be overridden by the president, if required.

Tribal areas listed under Schedule v enjoy greater protection of the tribes' indigenous identity, including the right to self-government, and protection from land alienation. Schedule vi, which deals specifically with the north-eastern states of Assam, Meghalaya, Tripura and Mizoram, grants a degree of autonomy to areas listed under it. 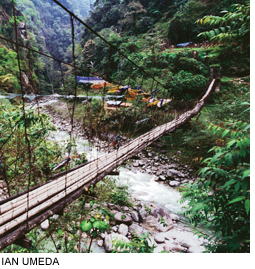 Tribals of Schedule vi areas govern themselves through autonomous district councils. They make and implement their own laws on certain aspects of their lives like marriage, succession, management of forests, shifting cultivation, etc.

"Legally, Dzongu is eligible for Schedule v status," says Atreyee Majumder of Public Interest Legal Support and Research Centre, a Delhi-based non-profit legal back-up centre that's advising the Lepchas. "There is a provision in Schedule v vesting powers in the president to identify areas eligible for Schedule v status in states which joined India after the promulgation of the Constitution; Sikkim falls squarely under this provision," she says. Including Sikkim under Schedule vi isn't quite a straightforward process because it would require either parliamentary intervention by way of a new law or a constitutional amendment.

Rajiv Dhavan, Supreme Court lawyer and director of the legal support centre, argues that since Sikkim is anthropologically and geographicallysimilar to the north-eastern states, and has a deep-rooted tribal history, it should be considered for Schedule vi status. "Any such effort will require a long-term campaign and the Lepcha activists are yet to coordinate with the research centre and work out a campaign strategy," says Majumder.

For now though, the focus is the hunger strike and protests against proposed dams on Teesta. But Sikkim officials say the hydel projects have all necessary environmental clearances and the consent of local landowners. "Sikkim is a small state, our main income is through tourism, we need alternative sources of income, like power," says M G Kiran, state information secretary. "We have called on the protesters to end their hunger strike and promised to look into their concerns," he says.

Dawa does not buy these assurances yet. "Without the chief minister no decisions can be taken by the state, so we are waiting for him to return," he says. And he is resolute. "Though we are a mild, peace-loving people, we do have some histories where we have fought, when pushed to the limit. The Lepchas of the past have defended this land, now it's our turn. If we just keep quiet, in next five years we will be finished."

For updates on the indefinite strike, see www.weepingsikkim.blogspot.com