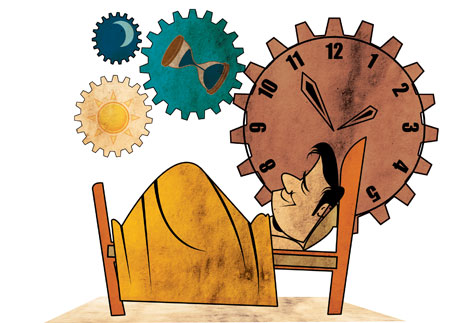 And at the wakening of your first sleepe. You shall have a hottdrinke made. And at the wakening of your next sleepe, your sorrowes will have a slake. So goes the medieval English ballad Old Robin of Portingale. “Let the end of thy first sleep raise thee from thy repose: then hath the body the best temper; then hath thy soul the least encumbrance,” wrote the 17th century English moralist Francis Quarles. Modern advocates of unbroken eight hour sleep at night might sneer at an interlude between two segments of sleep. But about until two centuries ago, in most parts of the world, people had two distinct intervals of slumber, known as “first” and “second” sleep, bridged by an hour or more of quiet wakefulness.

According to historian Roger Ekirch, “Usually, people would retire between 8 and 9 only to stir past midnight to smoke a pipe, brew a tub of ale or even converse with a neighbour”. Some lay in bed ruminating on the meaning of a fresh dream. Some prayed. Countless prayer manuals from the 15th and 16th century Europe offer special prayers for the hours in between sleeps.

Many made love. A doctor’s manual from 16th century France advised couples that the best time to conceive was not at the end of a long day’s labour but “after the first sleep”, when “they have more enjoyment” and “do it better”. Ekirch, author of the seminal work, At Day’s Close, believes that segmented sleep was for long the natural form of our slumber and consolidated sleep is a product of the industrial age. “Even Homer invoked the term first sleep in The Odyssey,” he writes. Ekirch’s book draws on more than 500 references to a segmented sleeping pattern: court records, medical books, literature and early anthropological accounts.

Night used to arrive early. Usually by about 7-8 pm. For many it was not a restful time. This was the pre-penicillin age. Respiratory tract illnesses such as influenza, pulmonary tuberculosis and asthma, all aggravated by bedding rife with mites, made nights difficult for many. Ekirch’s quotes an 18th century diarist who describes her asthma-ridden husband sleeping in “a chair for months, with watchers required to hold his head upright”. Among the labouring poor, sleep deprivation was probably chronic, prompting many to nap at midday, much to the annoyance of their masters.

“Associations with night before the 17thcentury were not good. The night was a place populated by people of disrepute—criminals, prostitutes and drunks,” writes historian Craig Koslofsky. “Even the wealthy, who could afford candlelight, had better things to spend their money on. There was no prestige or social value associated with staying up all night.” So people went to bed early.

Things began to change in the 16th century. In the wake of the Reformation and the counter-Reformation, rival Protestant and Catholic groups took to holding secret services at night. This trend began to be extended to other social spheres, but only for those who could afford to live by candlelight.

With the advent of street lighting, however, socialising at night began to filter down through the classes. In 1667, Paris became the first city in the world to light its streets, using wax candles in glass lamps. It was followed by Lille in the same year and Amsterdam two years later, where a much more efficient oil-powered lamp was developed. London joined ranks of cities with street light in 1684. By the end of the century, more than 50 of Europe’s major towns and cities were lit at night.

Ekirch believes that improvements in street lighting, domestic lighting and a surge in coffee houses—which were sometimes open all night—had a say in sleeping patterns. Nights became fashionable and people started going late to bed. Not surprisingly then, references to the segmented sleep started to drops from the late 17th century. This started among the urban upper classes in western Europe and, over the course of the next 200 years, filtered down to the rest of Western society. By the late 19th century, the idea of a first and second sleep had receded entirely from social consciousness.

When there is light

In recent times, there is a growing consensus on the impact of modern lighting on sleep. Erkich quotes the Harvard chronobiologist, Charles Czeisler, who likens lighting to “a drug in its physiological effects, producing, among other changes, altered levels of melatonin, the brain hormone that helps to regulate our circadian clock”.

Along with increased use of light, people were becoming more sensitive to efficiency and time-conscious. “The industrial revolution intensified that attitude by leaps and bounds,” Ekirch notes. In 1829, a medical journal from England urged parents to force their children out of a pattern of first and second sleep.

American sleep scientist Thomas Alvin Wehr believes that conditions today described as sleep disorder “may be nothing more than sleep’s older, primal pattern trying to reassert itself. For most of evolution we slept a certain way,” says Harvard-based sleep psychologist Gregg Jacobs. Russell Foster, a professor of circadian neuroscience at Oxford, agrees. “Many of the medical problems that doctors are faced with stem directly or indirectly from sleep. But sleep has been ignored in medical training and there are very few centres where sleep is studied.” He suggests that the waking period between sleeps, when people were forced into periods of rest and relaxation, could have played an important part in the human capacity to regulate stress naturally.