The nonconventional energy sector is seen as the mainstay of the nation's future power requirements and is all set for major expansion, following a significant infusion of funds. 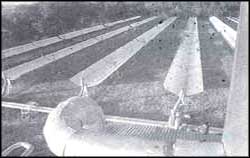 • A RS 4.5-crore, 100-kw solar photovoltaic power plant -- Asia's largest -- is to be commissioned by Prime Minister P V Narasimha Rao in May 1993 at Kalyanpur village in Aligarh district.

• A 30-mw solar thermal power plant is being set up near Jodhpur, in the Rajasthan desert.

These are all part of a sweeping nonconventional energy programme that is receiving an infusion of funds in the remaining years of the Eighth Plan and reflects the new image of the ministry of nonconventional energy sources (MNES), upgraded last year from a department. MNES minister of state S Krishna Kumar, noting that "renewable energy is the key energy sector of the future", warns of formidable costs and hurdles in replacing energy from conventional sources, such as oil and coal, with energy from nonconventional sources, such as wind, solar photovoltaic, mini-micro hydel and biomass gasifiers.


The ministry's action plan aims at a power generation target from nonconventional energy sources of 2,000 mw by 1996-97 from the present level of 200 mw being obtained now. Says Krishna Kumar, "We have been going at a slow pace because of the paucity of funds, but help from international donors is on the increase. The Global Environment Facility (GEF) will eventually have a corpus of $3 billion and we hope to get a sizeable share of this."

MNES secretary L M Menezes points out, "After nearly a decade of demonstration projects, it is now time to broaden the market and give the consumer a wider choice. The ministry is reorienting its programmes in this direction."

The ministry's efforts are being lauded internationally and Andrew Peers, British Petroleum (BP) Solar representative in India, says, "There is a sea change in the outlook of MNES. It is actively campaigning for commercialisation of these technologies."

Because of India's vast territory, varied geography and different agroclimatic conditions, its renewable energy potential is high. At present, such energy forms only 1 per cent of country's total energy production. Krishna Kumar says, "Our aim should be to hike this to 10-15 per cent by 2010." Ministry officials explain, "The primary reason for the low share of renewables in total energy production has been the low investment by the government in the sector." They disclosed that less than 1 per cent of the government's energy outlay is on renewable sources (excluding hydroelectric dams).

The government's total energy allocation for the Eighth Plan is Rs 63,979 crore of which Rs 857 crore was allocated to Krishna Kumar's ministry. The Planning Commission's working group had initially recommended an investment of Rs 6,922 crore in the NCE sector with the aim of installing 3,600 mw of generating capacity. However, this figure was whittled down to Rs 857 crore in the final plan allocation. MNES now anticipates that its financing in the last two years of the plan will be augmented by about Rs 1,300 crore, with the additional funding coming mainly as external assistance from the World Bank and GEF.

The World Bank has already sanctioned a US $115 million for projects in NCE sector and discussions are continuing with Indian government officials for further funding. The GEF funding sanctioned so far is US $100 million with MNES officials anticipating the total to be increased as ongoing negotiations conclude. MNES adviser J Gururaja disclosed that bilateral assistance of US $50 million and US $4 million from Denmark and Sweden, respectively, has been cleared and other bilateral financing negotiations are continuing.

Multilateral financing of the nonconventional energy projects in India is something new and Peers explains, "India is a forerunner in tapping the GEF for its nonconventional energy programme. And, V Bakthavatsalam, MD of Indian Renewable Energy Development Agency, adds, "this is the first time that the World Bank is funding projects in this sector."

After stepmotherly treatment from the Planning Commission which slashed MNES original Rs 6,622 crore request by 70 per cent for the Eighth Plan, the NCE sector's new credit line is seen as a new lease on life. Says R K Pachauri, director Tata Energy Research Institute, "Over the last five years, some renewables have emerged as technically and economically viable alternatives in the energy sector. More ambitious plans for their dissemination can now be launched on a larger scale."

The four pillars of non-conventional energy

Indian technologists developed mini-hydel systems more than 100 years ago, but in the post-Independence emphasis on the new "temples of modern India" -- huge dams and power stations -- mini-micro hydel systems were neglected. In 1989, however, hydro projects below 3 mw were transferred from the power ministry to MNES because it was felt that small-scale systems need to be dealt with differently. Former CPWD director general C Rama Rao says micro-hydel systems promoted by the Central Electricity Authority require extensive civil construction and, therefore, are costly. But a Chinese design cuts cost drastically and was adopted in some of the northeastern and Himalayan states.

The Eighth Plan committment to this energy sector is Rs 100 crore. In addition, the World Bank will provide Rs 210 crore and the GEF, Rs 220 crore, for small-scale hydel promotion in the hilly regions of Uttar Pradesh and Himachal Pradesh. A World Bank stipulation that loans will be available to only private firms, cooperatives and public sector undertakings (except generating companies), is intended to encourage their participation in these projects. A World Bank-MNES study in 1991 identified 45 potential sites in the four south Indian states and Punjab for small-scale hydel projects with a total capacity of 110 mw. The study's objective was to simplify design, standardise equipment and reduce costs.


MNES advisor J Gururaja says his ministry's programme for the deployment of solar photovoltaic systems "constitutes one of the largest government demonstration programmes in the world". Public sector organisations involved in this effort maintain the growth rate of the Indian photovoltaic market is among the highest in the world. Senior marketing officials of Central Electronics Ltd (CEL), of Sahibabad in Uttar Pradesh, and BHEL expect this to increase 12-fold in the next few years. About 30 per cent of the photovoltaic installations are commercial, unsubsidised and in such areas as telecommunications, signals, defence and oil exploration. MNES' photovoltaic programmes are used to provide domestic and street lighting and water pumping. They rely primarily on government subsidies.

The production of photovoltaic cells increased by 30 per cent per annum in the last decade. CEL reported last month that production of monocrystalline solar cells and modules reached a level of 1.25 mw. The level is a record "indicative of a breakthrough in large-scale use of solar photovoltaic systems in the country," according to CEL sources.

Rationalising of the duty and tax structure for photovoltaic cells and modules is encouraging private companies to enter the industry. British Petroleum Solar representative Andrew Peers says, "With the likelihood of $ 55 million in World Bank assistance for the photovoltaic industry directed to market development, several multinational firms are eyeing the Indian market."

Bangalore-based Tata BP Solar, one of the leading private sector companies, has been manufacturing photovoltaic modules and systems since 1992 and intends to set up a manufacturing line for solar cells. Says chief executive A K Vora, "The ratio of imported to indigenous cells is 80:20 now, as against 50:50 before."

In an effort to bring down the cost of photovoltaic cells, made conventionally from single-crystal silicon, MNES has been working since 1989 on developing amorphous silicon. BHEL has set up a 500-kw-per-shift pilot plant for MNES at Gwal Pahari near Delhi for the manufacture of amorphous silicon (A-Si) modules. BHEL director for engineering R & D K Ramakrishnan says, "Commercially obtained efficiencies of A-Si panels is only about 7 per cent per square foot against more than 15 per cent for crystalline silicon, but the former has low input costs and so lower manufacturing costs". Their main drawback, he adds, "is that the panels degrade fast. (But) our scientists are confident that this degradation can be reduced and its functional life increased."


Wind energy churned out by grid- connected wind farms has turned out to be the most feasible and cost-effective method of power generation. Its current level is about 45 mw but MNES' target by the end of the Eighth Plan is 100 mw.

Rakesh Bakshi, director of Vestas RRB India Ltd, a New Delhi manufacturer of wind energy equipment, says, "Wind farms have become a viable proposition because state electricity boards, especially in Gujarat and Tamil Nadu, have introduced a system of wheeling and banking of wind power." This system allows private investors to set up wind farms in a favourable location and feed power into the state grid and then withdraw an equivalent amount from it later. "However, state boards still have to work out a viable and attractive price for the electricity purchased," adds Bakshi.

Also being tried out are more than 2,500 wind pumps and 200 kw of wind-diesel or autonomous systems, wind battery chargers and stand-alone wind electric systems.

BHEL, the largest domestic manufacturer of wind turbines, is the leader in indigenised wind generators, which have grown from 55 kw size to generators of 200-500 kw capacity. Natural Energy Processing Co of Madras also says it has achieved significant indigenisation in manufacturing generators and fabricating the tower and other ancilliaries. Ajit K Gupta, director of the solar energy centre of MNES, notes, "Wind energy is a clear example of Indian firms taking technology from abroad, altering it to suit our conditions and then developing an industry based on the altered design. The Eighth Plan will generate sufficient demand for at least five manufacturers, in both the public and private sectors, to take up regular production of wind electric generators.

Cannon Energy Corp of USA has offered to set up a Rs 350-crore wind farm project of 110 mw capacity in Anantapur district, Andhra Pradesh. If the project, headed by an NRI, is cleared, it will be the largest in Asia.

Nevertheless, Bakshi complains, "Tariffs and duties for wind energy are higher than that for conventional power. Even in the current budget, greater concessions are given to conventional power than to wind electric generators. Why is the government discriminating against a pollution-free source of energy?"


Agricultural residue, agro-industrial waste and energy plantations are available in quantities which would justify their use for power generation. Even with presently available conversion technology, biomass can be use to provide electricity and heat efficiently.

B C Jain, director of Ankur-Energy and Development Alternatives, Vadodara, points out, "When a programme of biomass production is coupled with its conversion for energy purposes there is no net CO2 release as is the case with conventional power generration. This aspect is very well recognised the world over and this technology is recommended as one of the few option to arrest global warming." The capital intensity of biomass conversion technologies is a low Rs 10,000/kw of installed capacity, whereas a 200 mw thermal power plant requires at least Rs 14,000/kw, he adds.

MNES sources estimate the likely exploitable power generation potential by 2000 from biomass obtained from agricultual and agroindustrial residue, will be the equivalent of more than 17,000 mw -- and could be even as high as 60,000 mw. More than 1,000 biomass gasifiers have been installed so far.