Officials claim the locust problem is under control, but unless millions of hoppers -- young locusts -- stalking the deserts are exterminated quickly, things could really get out of control 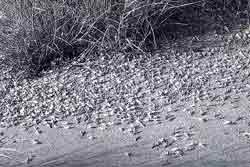 WHEN SWARMS of desert locusts from Africa invaded Rajasthan and parts of Gujarat in early July this yearfarmers helplessly re-lived the horror of seeing their crops destroyed. Says Prahlad Singh of Derdokabas village in Jodhpur districtAfter waiting for years, we finally had a good monsoon and the crops grew well. Then the locusts came and ate our crops and now, we face the menace of hoppers.

The villagers reacted quickly to the invasionthe first in six years. In Pokaranagitated villagers crowded the office of sub-divisional magistrate S L Paliwalseeking help. Ground teams for locust control began working round the clock in most villagesspraying pesticides.

A month after the operationsofficials declared victory. Early this AugustI S Malhijoint director of the Union agriculture ministry in charge of plant protectionboastedWe have brought the situation under control in most areas.Howeverthe lull has proved to be deceptive.
The swarms may have gone with the westerly winds or eliminated by pesticidesbut their legacy could prove equally dangerous. The eggs they laid 10 cm deep in the moist soil -- resistant to pesticides -- have hatched and todaywaves of small yellow hoppers in tens of thousands strut through the desertgobbling up any greenery in their path. Unless they are exterminated at this stagethe hoppers will mature into destructive flying swarms in 3-4 weeks and become even more difficult to destroy.

In the desert village of Longewal in Jaisalmer districtadult locusts are already emerging. Warns M C Guptasub-divisional magistrate of JaisalmerWe are running against time.Farmerstooare panicking. "Despite the use of pesticidesthe number of hoppers does not seem to have gone down. Nothing can be done to stop another locust infestationapprehends Bhikaram Choudhary, pradhan of Sankra village in Pokaran sub-division of Jaisalmer.

But officials are confident they can tackle the hoppers, particularly since the pests are concentrated now in Jaisalmer and Barmer districts, and say they are sparing no efforts. Declares C Meena, district collector of Jodhpur,This is a war-like situation and we are not counting the costs."

Control operations are coordinated by LWOwhich has 24 outposts and regional centres in JodhpurPalanpurBikaner and Barmer. The anti-locust squad consists of about 1200men. Ninety-six ground teams are stationed in the affected villagescovering an area of 23.25 sq km. Each team has two jeeps and one power-duster to spray benzene hexachloride (BHC). These teams are the real soldiers in the battle against locusts.

The LWO is also acquiring new equipmentincluding donations from foreign private companies. "Alsothe Food and Agriculture Organisation is mobilising international aid for usreveals LWO deputy director Satish Chandra. In Barmer and Jaisalmer districts, airplanes have sprayed a 66-sq km area with 4 tonnes of fenitrothion, 1.99 tonnes of malathion and 8 tonnes of dieldrin. The LWO has ground-sprayed 200 kg of BHC in the districts of Jaisalmer, Jodhpur, Jalore, Barmer, Bikaner, Banaskantha and Bhuj, covering an area of 101.43 sq km, and has distributed another 450 kg to the district administrations.

The operations will continue till October-Novemberwhen the locusts return to Africa for winter breedingbut we hope to wipe out the hoppers before thensays Jagdish Prasad, director of the LWO circle in Jodhpur.

When the first waves of hoppers appeared, farmers instinctively resorted to traditional control practices. They dug shallow trenches into which the hoppers fell. The farmers then smothered them in the trenches with sand. However, trenching proved inadequate, given the scale of the invasion. And, farmers said the ground was too stony and hard to dig trenches on the large scale required.

Now, under the supervision of the locust control teams, villagers spray their fields with hand dusters, but almost always, they do not don protective clothing.In factsays M S Meheran, member of a locust control team near Sankra village,when hand-dusters are not availablethey even sprinkle BHC by hand." Aware of the dangers of pesticidesthe villagers keep their cattle away from freshly sprayed areas (See box).

Despite additional funds and new equipmentLWO still has to grapple with some problems. Pesticides have sometimes been misused or hoarded. Another problem is in locating hoppers. R P Sharmaadditional collectorJaisalmersaysOnly 6 per cent of this 38,400-sq km district is cultivated. In the uninhabited and barren areas, hoppers proliferate unreported.In such casesonly aerial spraying is effectivebut officials are frequently "unable to pin-point the targetpoints out Gupta. Despite 20 air sorties in Jaisalmer district, hoppers have already matured in some parts.

Equipment failures also hamper operations. Says Meheran,We suspend work for 1-2 days every week when a Jeep or power-duster breaks down or when fuel and pesticide supplies don't reach us from Pokaran." The desperate villagers say they would rather spray BHC themselves than rely on a team whose equipment is always being repaired.

Operating in unfamiliar terrain with only a rudimentary knowledge of sprayingmost ground teams have a difficult time. Farmerswho have the most at stakecooperate in spraying operations and reporting hoppersbut other villagers are apathetic. Says GuptaCattle breeders in Jaisalmer sub-division think they have nothing to lose, not realising that every patch of greenery, including grass, will be stripped bare when the hoppers emerge into swarms. The villagers do not cooperate with us. How much can officials alone do?

To bridge communication gapsofficials enlisted patwaris (village revenue agents) to convey the demands for pesticidesdusters and aerial spraying. But Kailash Ujwalthe patwari of Lunakala near PokarancomplainsCommunication links are often out of order.Sothe patwaris become the target of ire of most villagers who insistOur patwari does not forward our requests.Officials have now also roped in school-teachers in each village to liaise with them.


The feverish official efforts have not all gone in vain and the swarms have been eliminated in many parts. But Akhilesh Yadavwho runs Gyan Sandhana village NGO working around PokaranwarnsThe situation is like a ticking time-bomb. There is no room for complacency.

Choudhary blames the mess on LWO's delay in launching a coordinated campaign. "The LWO has been moribund for more than 15 years nowhe says.Despite numerous surveillance outpostsit was unable to warn us of the invasion. We reported the first swarm near our village on July 5but the officials came only on July 12. By thenthe locusts had laid eggs."

LWO officials admit it took "some time to launch control operations." That the damage has been minimal so far is perhaps providential. Explains N S Bhatideputy director of the state agriculture department in JodhpurThis is breeding season, so the swarms lay eggs and move on, not eating much.Although officials claim there has been no crop damagein some areas fodder grass has been affected and villagers in JaloreJodhpur and Jaisalmer districts complain that newly emerging shoots have been partly damaged.

Despite their fearsthe villagers still have a regret. They must forgo a favourite dish -- locusts cooked in oil and laced with spices. They still talk of this protein-rich delicacy with excitement.