Taking the magic out of miracles

Promoting a more rationalist attitude to life at a mass level, that's what the Jan Vigyan Jatha sets out to do

Taking the magic out of miracles 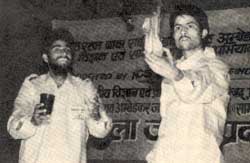 THE crowd gasps as a sadhu pierces his tongue with a trishul. Chants of awed reverence go up as a baba lights the hawan kunda (sacrificial pyre) with super-natural powers and another passes a flaming torch over his body.

It is to expose such miracles and to promote scientific awareness that the Delhi Science Centre (DSC)was set up. The centre was an offshoot of the Jan Vigyan Jathas which was organised in different localities of New Delhi this February with the support of the National Council for Science and Technology Communication (NCSTC).

The Jatha revealed that many so-called miracles were nothing but tricks. The sadhu's tongue is not actually pierced with a trishul. Instead, a trishul with a U-Ioop turned sideways is balanced on the tongue, creating the illusion of having perforated it. Again, the hawan kunda is actually lit up by an extremely flammable mixture of potassium permanganate and glycerine. And when a flaming torch is passed swiftly over the body, no burn injuries result because the skin doesn't touch the flames for more than three seconds.

Many who came to watch the Jatha volunteers narrated their experiences with phony miracle-vendors. Women talked of being sexually exploited under the spell of miracles. According to Charu Gupta, secretary of the DSC, this is because of "the lack of scientific methodology" in our education system.

DSC activists have mastered the artifices used by godpersons to deceive people. In their demonstrations, the scientific principles involved in the tricks are explained to the audience. In fact, so successful was the Jatha that many sadhus came to the activists and begged them not to destroy their livelihood.

The Jathas also taught people how to test domestic water pollution using an inexpensive water-testing medium. Simple methods to purify water were also demonstrated. More than 500 persons in Delhi alone showed,an eagerness to learn about the scientific principles which underlay these "miracles".

Preparations are now on for the Bharat Jan Vigyan Jatha '92 (BJVJ '92) - a nationwide programme to be held from October 2 to November 7, 1992. The plans are ambitious. BJVJ '92 will cover about two lakh locations through 50,000 local organising committees. After the Jathas, these committees will continue as community centres for people's science education. The NCSTC is contributing towards 10 per cent of the total expenses of the programme. The rest of the financial resources are to be generated by volunteers and participants locally.

How successful the Jathas will be, only time will tell. But the effort proves that the work done in Kerala by the Kerala Sastra Sahitya Parishad and by rationalists like Abraham Kovoor and B Premananda continues to be extremely relevant even as we prepare ourselves for the 21st century.