Searching for the great hedge in the UK, Dileep Chinchalker uncovers the story of a hedge that ran from Torbela near Rawalpindi to Calcutta in the 19th century 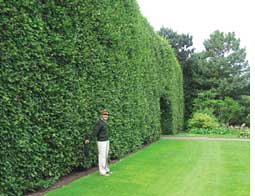 Who knows it better than thrushes and shrews that strong hedges have a direct bearing on one's relations with neighbours? With bungalows, open lands and hedges giving way to high-rise apartment blocks, one can find more neighbours on the same piece of land than ever, but social contact missing. Disappearance of hedges in cities and their replacement by concrete walls could be an indication of growth but it also shows growing aloofness. It is a matter of serious concern, may be not for humans, surely for the likes of warblers, moles and a whole range of lesser creatures. Urbanites may have only noticed the absence of common house sparrows from their environs, but it is the whole mini eco-system of flora and fauna that is at stake.

Remember the simple joy of holding a glow-worm, or picking karonda berries? Or collecting odd shaped leaves for herbarium or a hibiscus for floral dissection without having to go too far? Hedges that were an essential part of the human environment also provided nesting sites for smaller birds, shelter for certain reptiles, rodents--mice banished from houses--and breeding places for insects. They helped propagate many shrubs and carried over seasonal climbers from one monsoon to another. They supported a healthy human habitat--a fact not many may not appreciate today.

India is not the only country that has lost its hedges. After World War II, hedgerows began to disappear from the English countryside. After the war, people began to encroach upon hedgerows to increase farming acreage. By 1985, as much as 155,000 km of hedgerows from enough to encircle the earth nearly four times, vanished from the country. The next six years saw a net decline of more than 85,000 km.

In the early 1990s, the president of the County Landowners' Association, Lord De'Ramsey, saw hedgerows as "nothing more than an attractive luxury". "Essentially it was a traditional landscape feature trying to survive in 21st century environment," he said. Still on 3,000 hectares of his family farm De'Ramsey had 22.5 km of hedgerow and it cost him UK 4,000 a year to keep them trimmed and healthy.

Besides their literary romance, there is another fascinating aspect of hedgerows their antiquity. Hedgerows have been referred in church records and were a regular find in archaeological excavations, which date them back to second century AD--the Bronze Age. A historian described them as "among the world's oldest artefacts still in use". De'Ramsey's farm at Monk's Wood boasts of a hedge that was planted by a niece of William the Conqueror, sometime in the second half of 11th century. It even has a name --Judith's Hedge. It has witnessed 40 monarchs and has seen the times of Chaucer and Shakespeare.

In the 1970s, Max Hooper, a passionate defender of hedgerows, developed a formula for determining the approximate age of a hedgerow. According to the botanist, the age of the hedgerow is equal to the number of woody species in 100 feet hedgerow multiplied by 100. Despite its simplicity, the formula has proved to be fairly accurate.


England has begun reviving this distinctive feature of its countryside. Now it is legally forbidden to remove hedgerows in Britain and the government offers subsidy to those maintaining them.

I had an opportunity to see this ancient feature of the English countryside in the summer of 2008. They are found mostly in southern England but I tracked a respectable one not far from London, on the MacCreedy farm near Heybridge, Chelmsford in Essex.

One morning, I was discussing the prospect of visiting another with an agricultural expert Gautam Mohan Sirur in Scotland. Swept by my enthusiasm my host Karl produced a paperback for me to thumb through The Great Hedge of India, by one Roy Moxham.

I was not impressed initially. But as I read on, I found hedgerows to be a curious but important chapter of British India's history that most textbooks have missed. It was associated with a cruel and manipulative levy of the East India Company the salt tax. It cost poorly paid labourers two months' wages for the price of a year's modest supply. The East India Company's restrictions led to short supply and trafficking.

To clamp a tight control the company planted a hedge across whole of India in the 19th century Beginning from Torbela near Rawalpindi, it passed through Leia-Multan-Fajilka now in today's Pakistan; Hissar-Delhi-Mathura-Agra in north India; Etawah-Palighar-Airak-Chambal ravines-Jhansi-Khailar-Babina further down; Sagar-Khandwa-Burhanpur-Itarsi in Central Provinces and finally turned eastwards from Chandrapur, Maharashtra in the direction of Calcutta. The hedge ran for more than 3,700 km. It turned out to be the largest manned government department in the Raj and served as a brutal yet effective barrier to curb smuggling of salt.


Moxham was originally a tea planter who spent the early years of his career in Africa. Browsing through a second-hand bookshop, Quinto, in London he came across a passing reference to the great hedge in Rambles and Recollections of an Indian Official by Major-General Sir W H Sleeman. That was a chance find. But it launched a quest for the hedge.

Beginning in 1996, Moxham visited India regularly the next three years. Equipped with detailed maps, other findings made in England and even a Global Positioning System he wandered across the plains of central India. Braving the harsh tropical climate, inquisitive people and the general apathy of Indian babudom he steadfastly pursued what he called a "ridiculous obsession".

All he found was ignorance about the East India Company's customs hedge. Moxham's search was focused on locating a raised 20-foot wide corridor of land with remnants of perennial thorny bush. Indian plum was the principal bush used in customs hedge. But it did not have a long life span, unless reseeded from the original bush. In fact, none of the trees deployed as anchors was expected to live more than 60 years.

In the late 1990s, India had made spectacular progress in satellite technology, yet the price quoted by National Remote Sensing Agency of Hyderabad to produce four overlapping photographs of a particular locality was a forbidding us $16,000. So Moxham had to depend upon his self-annotated maps, local residents and a young lad, Santosh, who was his liaison with the Hindi speaking populace.

The hedge was initiated in the 1850s and was at its peak till 1879 when it was abolished because of uniformity in salt tax throughout the colonial state in India. The irony of this formidable barrier was that after independence, the public works department found it to be most suitable ground for building access ways in rural areas. This knowledge came from an unlikely source, a pujari from a Hanuman shrine in Airak near Jhansi in Uttar Pradesh.


In 1999 Moxham had reached a dead end. He had decided to retreat for the season when he was approached by an old but powerfully built priest with bushy white beard.

He knew the old hedgerow or the parmat lain and guided Moxham to its vestiges. The pujari was a dacoit in his previous inning hence knew the terrain like the back of his hand. A retired college principal P S Chavan from nearby Chaknagar also lived up to his postgraduate degree in geology and took Moxham to considerable and probably the last of the stretches of the parmat lain.

Moxham's The Great Hedge of India, an unusual blend of travelogue and detective story appeared quite unbelievable. That was till one balmy afternoon I ran into Quinto, the bookshop on the corner of Charing Cross and Newport Street in central London described by Moxham in the first two paragraphs of his book. The description was remarkably accurate. It might seem a petty discovery. But it was exhilarating to be in the same place as the British writer who had been foraging litera lly in my backyard towns in India. Quinto sparked off another search--of an author by a reader.

It was easy to trace Moxham to the University of London's conservation department. But the department was off limits to casual visitors and Moxham had retired some time back. They would not give contact address to a stranger. I could do nothing more than leave a message with the hope that it would be forwarded. When I reached my lodging that evening a note from Moxham lay on the table inviting me to tea the next afternoon.

Neal Street branches off at the top end of the Shaftsbury Avenue. A narrow cobbled street interspersed with elms. A couple of tables were laid under a group of elms in front of a tavern strategically across The Apple Tree. This tree happened to be a boutique with a bright pink faade. On the top storey lived Roy Moxham. I settled down under the young elms with a pint of Guinness waiting for the appointed hour. When I pressed the doorbell I was allowed passage to the top branch of the tree. A very tidy bachelor's flat radiated oriental charm. Walls adorned pictures of Indian deities and shelves replete with references on India. A couple of frames exhibited well-preserved tamarind leaves, which Moxham had plucked while returning from a final sighting of the hedge. He had also collected seeds of the banyan tree for his conservationist friends in London. Some of them found their way to pots in Roy's flat. Banyan and peepal seeds need to go through the digestive system of birds before germination, that is a common belief. In London's cold ambience they did surprisingly well when provided a warm spot behind a refrigerator.

Just as I was beginning to feel smug thinking that I must have been the only Indian reader to come this far, Roy produced a copy of a Marathi translation of his book. The translation was published in 2005. Crestfallen I was not, because at the end of a two-hour entertaining and enlightening chat I walked out with an assignment to translate The Great Hedge of India to Hindi. Something to claim my pound of reflected glory.