Thousands of people in Bihar are trapped between the Kosi and its embankments. They have been suffering for decades. But the state government is still blind to their plight 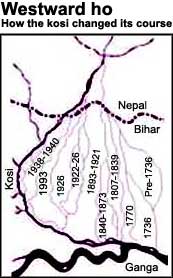 NORTH BIHAR. The people here have resigned themselves to their fate. Theirs' is a waterworld, trapped almost perpetually amidst the swelling waters of Kosi, the "sorrow of Bihar". Though floods are not rare here, this year has been the worst. And the people, with their food and drinking water supplies running out with each passing day, fear that a watery grave awaits them. Embankments, built by the former Congress government, have failed to contain the mighty river once again. The results are disastrous, and reek of ignorance, government apathy and political greed.

Around eight lakh people, in some 304-odd villages located between the embankments and the Kosi, in the districts of Saharsa, Supaul, Madhubani and Darbhanga, are suffering. They live in sub-human and poverty-stricken conditions without any vestiges of development. The genesis of their misery goes back 40 years when, in 1954, Kosi's floods devastated Bihar. Jawaharlal Nehru, the then-prime minister, reviewed the situation and promised help. Still fresh from the freedom movement and eager to implement "Shramdaan", the Gandhian concept of voluntary service, the then-L N Mishra-led Congress state government embarked on what was to be a disastrous experiment: constructing embankments to tame the Kosi, a river notorious for its capricious behaviour and repeated shifts in its course (See box: Roaming river).

Madan Mohan Verma, a veteran socialist, who opposed the government's plan to build the embankments on grounds that they would only aggravate the problem by trapping villages in between them, was first called a traitor, and was then jailed by the state government. "The politics of embankments have made this a disaster," he says. He remembers, how the state government launched an extensive public relations campaign, promising "heaven" to the villagers. L N Mishra cited the example of the Hwang Ho in China, how it was tamed through embankments and even sent two experts, K L Rao and Kanwar Sein, to study the situation there. They returned to suggest that Bihar should follow China's example, but overlooked the fact that between 1048 and 1952, Hwang Ho had shifted its course nine times and during the 1933 and 1955 floods, the embankments along its course suffered numerous breaches.

The work of building embankments began in 1954 using voluntary labour, under the auspices of the newly formed Bharat Sewak Samaj. L N Mishra was its chairperson. And with it, began the Mishra family's lengthy foray into bulling embankments. Sources say that Jagganath Mishra, the younger brother of f N Mishra, even became the contractor for the project. Years later, an investigation exposed the astounding extent of money spent under the pretext of taming the Kosi.

A 144 km-long embankment on the eastern side of Kosi and a second, 125 km-long one on its western side, were built to confine the river to some 500 sq km. However, these led to more embankments in north Bihar. According to a local leader Dinesh Kumar Mishra, the total length of these embankments have gone up from 160 km in the 1960s to 3,454 km in 1989. The figures also establish their inefficacy: in the 1980s, the total area prone to floods was 25 lakh hectares (ha). The same figures had more than doubled to 65 lakh ha by 1992. Likewise, in the 1980s, 22.1 per cent of the state population were being affected by floods. By 1989, the floods were devastating as much as 56.57 per cent - more than half of the state's population. These figures, says Dinesh Kumar Mishra, prove that, contrary to the early promises, increasing expenditure on flood control has only brought misery and grief.

Why have the embankments failed? The so-called "champions" of flood control had paid no attention to the geocultural history of the region and ignored the fact that the villages trapped in between the embankments could not be left to the mercy of God forever. Bhagwat Prasad Yadav, veteran freedom fighter and founder of the Kosi Snagharsh Sarniti and Kosi Pidit Jan Kalyan Sarniti- independent groups fighting for betterment of peoples1 plight in flood-prone areas - says due to heavy siltation at different sites along the Kosi, the river bed has risen dramatically and it is flowing at the level of the embankment tops at some places. Even a minor flood, he says, can now wreck extensive havoc on these villages. Despite efforts by Yadav and a few others, the plight of the flood-hit villagers continues to be appalling. Anothy Yadav, with 77 years behind him, is living proof of the hardships these villagers have to face everyday. He lives in Kedli, a village that has been eroded nine times in the last 30 years and is facing erosion once again as the merciless Kosi continues to flood its banks. "We knew what would happen to us once the embankments were constructed. So we opposed them, offered Satyagrah in 1956, but the Congress leaders promised us heaven. Today we arc starving. Even though we have our own land," he laments. Further, the people outside the embankments, says Anothy, consider them outcasts. "We are treated like dogs," he says. "It is more like living in hell."

Ashok Kumar, another villager, narrates how, during the 1984 floods, they were shifted on to the embankments where they took refuge for a year. "Then in 1993, Kosi destroyed over 200 houses. This year, some 100 houses have been devastated so far," he says. So, while the able-bodied leave the villages looking for employment, the very young and the old are left behind to fend for themselves.

The state government has been more than apathetic on this issue so far. While Jaggannath Mishra, now retired from active politics, continues to defend the embankments, Laloo Prasad Yadav, husband of the chief minister of Bihar, preferred to pray to "Mother Kosi" and blame the Congress Party rather than take any positive measures. After the 1987 floods, the then-chief minister Bindeshwari Dubey promised to rehabilitate the villagers. He set up the Kosi Sufferers Development Authority (KSDA) to effect this. Two years later, the KSDA was formed and Lahatan Choudhary, an ardent embankment supporter, became its chairperson. The government allotted Rs 22 lakh to fund KSDA, but following a change of government, all plans came to a standstill.

Now the problem of the villages is being taken up by social workers. Last year, nearly 50 such organisations formed the Kosi Consortium under the leadership of a young activist, Ranjib. So far, says Ranjib, the consortium has organised some 30 camps in the interiors of the flood-prone districts. However, till the state government wakes up from its slumber, nothing can be done. And as of today, the villagers continue to suffer for the mistakes of the past political leaders.
Bihar Kosi Floods Floods STATES Flood Control Special Report Special Report Climate Change United States Of … Legislation Emission Targets Renewable Energy Renewable Energy Energy Policy Energy Policy Energy Efficiency Energy Efficiency Climate Mitigation Crosscurrents Crosscurrents
Donate Now