THE KING OF SMALL THINGS

A civil engineer and a farmer, he knows the importance of the relationship between land and water. Small dams are his forte.

THE KING OF SMALL THINGS 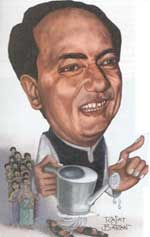 'A small king, a small portfolio', was the popular reaction in 1985 when Digvijay Singh became irrigation minister of Madhya Pradesh (MP). For the next five years, the civil engineer-turned-politician advocated small dams in agriculture. "He was speaking the language of the villagers who traditionally irrigate their land through small dams," says Biren Tewari, a senior Congress leader.

Since then, he is known as a grassroots leader. "Being a civil engineer and a farmer, he understands the importance of land and water very well. He always thinks from the grassroots level," says Tiwari. The tennis-loving and soft-spoken raja (king) of Raghogarh is known for his patronage to all initiatives at the grassroots level. When he became chief minister in 1993, he immediately called an all-party meeting on the controversial Sardar Sarovar dam and protested the project on technical and cost-benefit grounds.

His first major decision was to implement Panchayati Raj. That done, Singh began working on the agenda for the panchayat bodies; he implemented and developed better sanitation, education, land and water management projects in the name of Rajiv Gandhi Missions (RGM). People got sweeping powers in developmental activities. "It was very difficult breaking the conventional pattern of power flow," Singh conceded in an interview to Down To Earth.

Yet, as our survey reveals, he is often accused of ignoring urban environmental problems. "He does not seem interested in checking pollution by industries. Rather, many of his friends are owners of these units," says Hariram Patidar, village leader from Ratlam, pointing to the H-acid contamination of groundwater near the industrial town. Similarly, leaders of victims of the Union Carbide disaster show scepticism. "With a Bhopal tragedy in our past, no chief minister can show as much insensitivity to industrial pollution as Digvijay Singh. He patronises all polluting industries," feels Satinath Sarangi, a trustee of Sambhavana Clinic that treats Bhopal gas disaster victims.

Also, his decentralisation agenda is strongly dismissed as "decentralisation of corruption". Local people often echo this sentiment while talking to the press. Since he took over as chief minister, some of his cabinet colleagues have been accused in corruption cases ranging from timber smuggling to swindling of money meant for panchayat bodies. He denied election tickets to five colleagues in the November 1998 assembly elections as they were facing allegations of corruption.

Despite all these charges and accusations, his attention towards the grassroots agenda is believed to be the reason for his victory in the last assembly elections, upsetting all poll predictions. His agenda, it seems, remains the same in the second term. After his swearing-in ceremony, he announced that he would go in for further decentralisation of power.

A small order? "I will be gainfully employed," Singh says, pointing out what he will achieve from it.

BASIS OF RATING: Two-thirds of the environmentalists who replied felt that he has taken personal interest in sustainable development and promoted participation of NGOs and the poor in environmental management. The environmentalists have also cited the Rajiv Gandhi Mission for Watershed Development as a successful programme. They see a definite change for the better in the state's environment. REVIEW OF WORK

Grassroots organisations are as important, if not more, than the engineering structures in the watershed, writes Digvijay Singh in the foreword to the Madhya Pradesh Human Development Report, 1998. It echoes his style of governance. A look at his various schemes - Rajiv Gandhi Missions, Panchayati Raj and Joint Forest Management (JFM) - reveals that there has been a conscious attempt to make people the pivot of development. People have been made responsible for their development and have been empowered to pursue it.

In the case of watershed management, watershed committees have been made representative by involving all villagers. And these committees have unprecedented powers to manage land and water resources through the watershed mission. By this arrangement power has been decentralised beyond the panchyat level. These organisations would be taking over the engineering structures after the mission withdraws. The marriage between watershed activities and it m is another innovative way of involving people closely with ecological regeneration in the state.

He adopted a similar approach - decision making by the community - for the controversial Sardar Sarovar dam as well. While accepting the protest against the dam, he facilitated discussion among the protesting organisations, the affected people and government officials. The movement got a fillip with his formal demand for reducing the height of the dam. He even propagated small dams as alternative to the big dams.


Realising the importance of natural resources for survival, the Digvijay Singh government introduced the Rajiv Gandhi Mission for Watershed Development (RGMWD) on August 20, 1994. Initially, it proposed to improve 1.2 million hectares (ha) of degraded land within four years. The target was revised in 1996 to more than 3.4 million ha of degraded land. RGMWD is funded by the Union government's Employment Assurance Scheme (EAS) an Drought-Prone Area Programme (DPAP).

At present, the mission has been implemented in 8,198 villages covering 5,714 micro-watersheds. Further, 30,344 self-help groups have been formed in watersheds across the state. The mission's activities have also improved the economy: in just three years, 14 million person-days of employment has been created in the state.

Though the mission has been introduced in all 61 districts of the state, Jhabua, a tribal district in the state, has met with the maximum success. The district was facing chronic drought and 60 per cent of its land was degraded. With the initiation of watershed management, it is not only getting back its forest but the degraded lands have also been brought under cultivation.

Seed banks under the RGMWD were set up to ensure continuous supply of seeds to villagers in the watershed development areas. This has helped villagers avoid moneylenders, who charge a high rate of interest on the loan. A villager gets a loan of seeds from this bank on the condition that it is returned with an interest in seeds only. All villagers are members of the bank and also provide the premise for it. At present, there are 314 such banks functioning in the state.


IFM-cum-watershed management programme is a relatively new concept. It was adopted in Jhabua even before the Union ministry of rural development issued guidelines in 1995. It began in 1994 with the formation of 20 village forest committees (VFCs). VFCs are responsible for protecting and maintaining forests with the help of the state forest department. The number of VFCs had gone up to 4,376 by 1998. For greater women's participation, 50 per cent of members in these committees are women. Similarly there are 3,925 forest protection committees (FPC) to guard densely-forested areas.

Though JFM was adopted in 1991, a resolution was issued by the state government in 1995 to make it more participatory and to have an integrated approach to watershed activities. It is now termed as the Village Resource Development Programme.

An intensive awareness programme was undertaken by forest officials before introducing the scheme. "Initially people used to look at us suspiciously. We told them that forests were theirs, yet they were disappearing fast. We offered them help in regenerating the forests," says A B Gupta, who was the divisional forest officer of Jhabua. "Simultaneously, I asked mv own staff to change their attitude towards villagers," he says.

Today, 60 per cent of Jhabua's total forest area is covered under JFM and there are more villagers guarding forest than forest guards: for every forest guard, there are two villagers protecting the forests, Altogether, there are 3,925 forest protection committees under JFM.

"While JFM has protected the forest, watershed has given back the land's fertility in the form of rising groundwater levels," says Gupta. In November 1997, 22 gram panchayats decided to hand over another 4,000 hectares of village land to the programme and declared it forest area. With this success, the government has set a target of covering 50 per cent of the 30,000 villages of the state situated in the periphery of forests under JFM by 2000.


"Digvijay Singh is very sensitive to the problem of rehabilitation and the environmental impact of big dams as proposed under the Narmada Valley Development Project (NVDP). His practical and pro-community approach to this controversial issue really helped us a lot," says Shreepad Dharmadhikari, an activist of Narmada Bachao Andolon (NBA). Under the NVDP, 30 major dams, 135 medium-sized and some 3,000 small dams are proposed and almost all of these would be in Madhya Pradesh, except the Sardar Sarovar dam that is coming up in Gujarat.

Though a large forest area would be submerged and a lot of people would be displaced by these dams, the only benefit from it would be electricity supply. No government in the state protested against the project except the Digvijay Singh government.

NBA wants the project scrapped, as there are several problems associated with rehabilitation of the displaced and the dam's adverse impact on the environment. In 1993, when Singh came to power, he called an all-party meeting on the issue. At the meeting, he acknowledged that the issue of rehabilitation had not been worked out properly. He opposed the project on "technical, economical and environmental grounds."

In his complaint, he explained the fault in the design of the dam; it would not carry as much water as is expected. And its submergence of more forest areas would disrupt the cost-benefit balance. He stuck to this stand in the Supreme Court in response to NBA's petition against the dam.

After the all-party meeting came the workshop on all dams proposed under the NVDP. The workshop, attended by NBA, government officials and the affected people in December 1997, set up a task force in January 1998 to review the dams proposed with a special reference to the Maheswar dam. "These kind of steps suddenly changed our approach and we became open to suggestions from the government. Discussions really help you to sort out problems," says a member of the above-mentioned task force. He has reportedly accepted the recommendations of the task force that suggested smaller dams in place of the big ones.

In case of two other dams, Bargi and Tawa (already built), Singh intervened by giving fishing rights in the reservoir, which earlier used to go to contractors, to the rehabilitated people.

In case of Bargi, he set up a committee in 1993 and accepted its recommendation of rehabilitating the displaced by forming a cooperative to give it fishing rights. The same rights were given to the villagers rehabilitated by the Tawa dam.